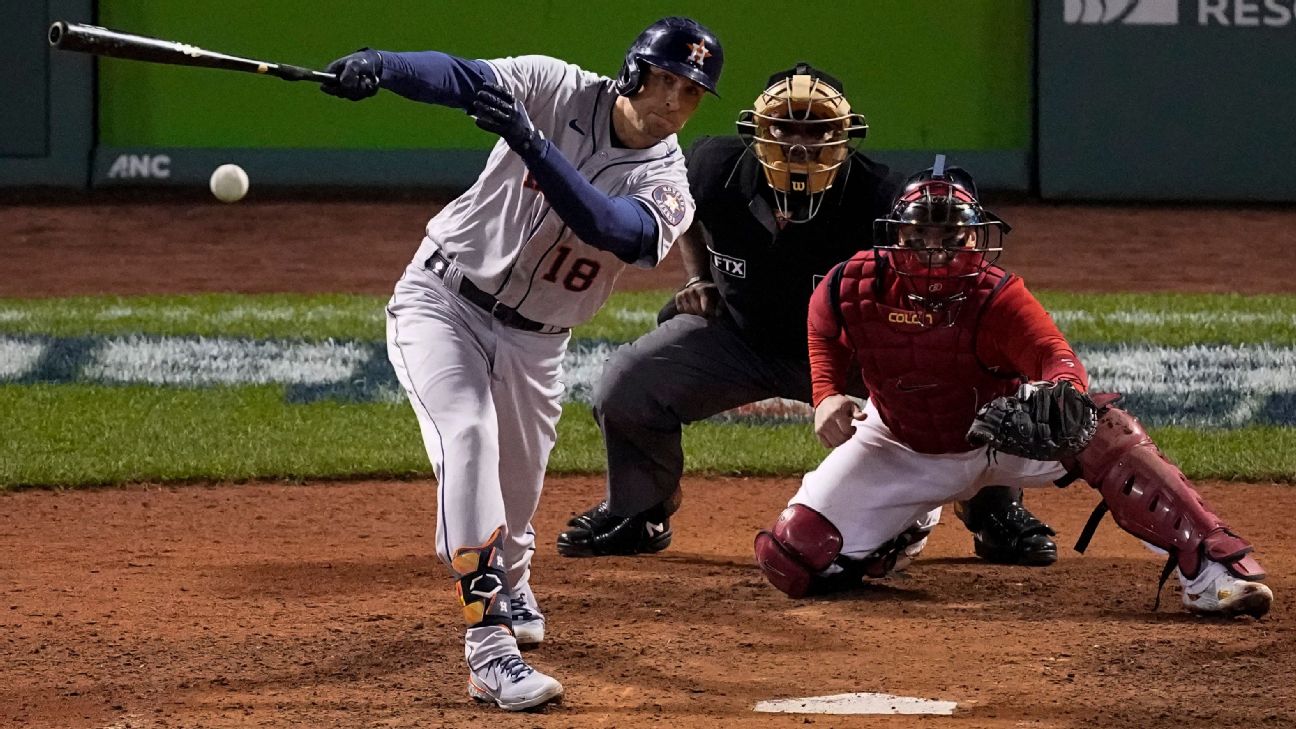 BOSTON -- A seven-run ninth inning capped a comeback by the Houston Astros in their 9-2 victory over the Boston Red Sox in Game 4 of the American League Championship Series on Tuesday night.

Houston trailed 2-1 after the first inning of play, until second baseman Jose Altuve homered in the eighth off reliever Garrett Whitlock to tie the game before the visitors broke it open in the ninth to even the series at 2-2.

Of Altuve's 21 career postseason home runs, it was his 12th that either tied the game or gave his team the lead. That ties former New York Yankees great Derek Jeter for the most such home runs in postseason history.

"We need to tie the game right there," Altuve said. "Was happy to score with a homer right there. What we did in the ninth inning was amazing."

Correa's double to lead off the ninth ignited the winning rally, but it was backup catcher Jason Castro who came through with the biggest hit after Altuve's homer.

With two on and two outs -- and the score still stuck at 2-2 -- Castro hit an 87 mph cutter from Red Sox starter-turned-reliever Nathan Eovaldi to right field for an RBI single. The floodgates opened after that.


"That was pretty cool to be in that spot," Castro said afterward with a smile. "It was a great team effort to put us in that spot."

Moments later, Michael Brantley's three-run double off lefty Martin Perez sent Red Sox fans to the exits as the Astros changed the momentum of the series when they needed it most. It was a dramatic turn of events.

"This is one of the great things about baseball," Astros manager Dusty Baker said. "When you're dead in the water and things aren't going good, and then all of a sudden, boom, boom, boom, and you've got seven runs.

"That's what they've been doing to us this whole series, and we're capable of doing that as well."

The seven-run inning is tied for the most runs scored in the ninth inning of a game in major league history. And they all came with two outs.


In fact, the Astros have scored 36 runs with two outs this postseason. According to ESPN Stats & Information research, that's the most two-out runs ever in a team's first eight games of a postseason.

"I'm just glad that we didn't quit," Baker said. "What a job our bullpen did."

The Astros' 'pen covered the final 7 innings after starter Zack Greinke came out after 37 pitches. He wasn't scheduled to go long. Greinke gave up a two-run home run in the first inning to Xander Bogaerts after Alex Bregman homered for the Astros in the top of the inning. But that's all the scoring the Red Sox would manage. Boston walked seven times but had only five hits, ending its string of consecutive games with 10 or more hits at six.

Altuve's home run and the work of the bullpen was impressive, but the talk after the game was about Castro. He battled one of the best Red Sox pitchers and came out on top.

"He was sitting on the bench for seven innings on a cold night," Correa said. "You don't have batting cage nearby to warm up because the ballpark is so old. I don't know how he did it, but I admire that because I wouldn't be able to do that." 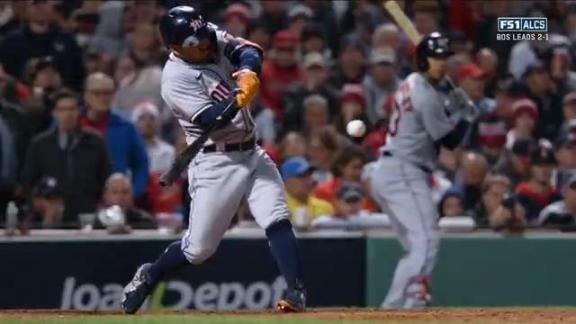