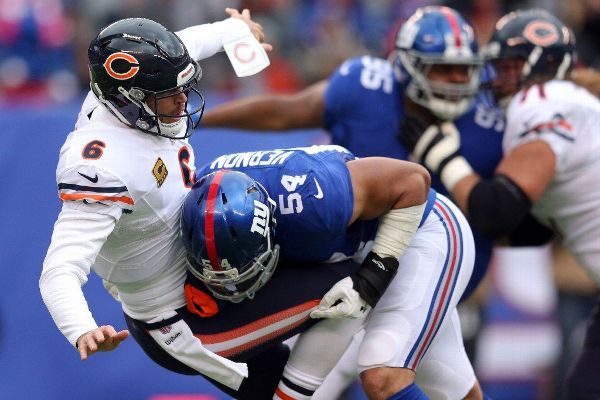 Cutler missed practice Wednesday, but Fox refused to rule him out for Sunday against Tennessee.

Cutler was sacked four times at MetLife Stadium, but finished the game. A source said Cutler underwent tests Monday to determine the severity of the injury.

Fox would not say if Cutler's right shoulder injury will eventually require surgery.

"There are different levels of injury, you know. Tear is kind of a broad term," Fox said when asked if Cutler has a shoulder tear. "It is sore. There is soreness to it. But there are a lot of things in the shoulder that can affect the quarterback. Some of them can be just chronic, old, just wear and tear like pitchers or quarterbacks in the National Football League. So it's injured, but it's not season ending."

In the likely event Cutler is unable to play in Week 12, fourth-year quarterback Matt Barkley is preparing to start against the Titans. Barkley has appeared in one game for the Bears this season, completing 6 of 15 pass attempts for 81 yards and two interceptions in a loss to Green Bay on Oct. 21.

"I'm preparing like I'm starting," Barkley said Wednesday. "Getting the reps is big in any quarterback's development. I'm taking advantage of those and getting timing down with my receivers. Whatever happens, I'll be ready."