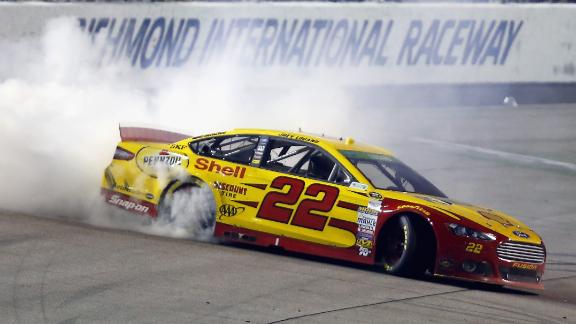 Logano used a savvy move to get around three dueling former champions in the final laps Saturday night at Richmond International Raceway, and the classic short-track ending caused tempers to flare in a big way in the garage afterward.

The biggest skirmish had Ambrose, who finished 18th, confronting Mears, who was 19th. Mears first pushed Ambrose out of the way, and Ambrose retaliated with a thundering punch in the face that appeared to draw blood.

It was unclear what caused the two to confront each other, but NASCAR vice president of competition Robin Pemberton said the governing body would review the matter.

Logano, meanwhile, needed 26 races and two trips to Richmond before putting himself in NASCAR's playoff last season. There will be no such nail-biting this year, and it took just one Richmond race to make it so.

The former Joe Gibbs Racing driver took advantage of the late-race duel to grab the lead and then outran former champions Matt Kenseth, Jeff Gordon and Brad Keselowski. Logano's second victory essentially assured him a spot in the 10-race Chase for the championship, which he only achieved on his last chance a year ago.

Logano's first career victory on the 0.75-mile oval came when Gordon, Kenseth and Keselowski raced in a triangle jockeying for position, and Logano went underneath all three and held off Gordon for his fifth career Sprint Cup victory.

"I'm more surprised than anyone else here,'' Logano said. "This is one of my worst tracks. ... What a crazy finish.''

It got crazier afterward, with Keselowski vowing to remember how Kenseth blocked him from a chance at winning.

"I had a shot at winning the race and felt like he ran me off the track,'' said Keselowski, who was fifth on the final restart but had the fastest car on short runs all night. "You race to win and he definitely was racing to win, but you hope when somebody races to win that they at least win the race if they're going to wreck you or run you off the race track.

"It was just a mind-boggling move to me, but I made sure I got him back and made sure my teammate could win the race. ... I thought it was uncalled for. ... Just got to put that in the bank and remember it,'' Keselowski said.

Gordon said Kenseth was just doing what he needed to do to try and hang on.

"I think Matt did what he thought he had to do to win,'' Gordon said. "He started making his car real wide. He probably didn't make the guys behind him real happy.''

Kenseth had come from nowhere after lurking in the back of the top 10 all race long, suddenly charging through the field and passing Gordon to grab the lead with 38 laps to go. It was his first lead.

"I was trying to win the race. I think that's what all five of us were trying to do,'' Kenseth said. Logano, meanwhile, looks forward to the next 15 races knowing he's already got a spot in the playoffs.

"At this point, we really have nothing to lose,'' Logano said of the remaining 15 races before the Chase field is set. "It's all about going for wins and having fun out there and making sure we're ready for when the Chase starts.''

"I was really just trying to battle with those guys to get the best finish that we could,'' Gordon said. "(Logano) was in a great position while we were all sitting there sliding around battling it out. To come home second is still a great finish.''

"That last restart was intense. ... I just drove by everybody,'' Busch said.

Gordon, who led 173 laps, and teammate Earnhardt both seemed poised to challenge at the end, but after the final restart, Team Penske teammates Logano and Keselowski became the ones to watch.

Their cars had easily been the fastest on fresh rubber all night, so much so that Gordon said, "I just had to let the 2 and the 22 go right by me because they were so fast'' on fresh tires.

Signs of the wild ending may have come very early.

Clint Bowyer started third and hoped a return to one of his best tracks would allow him to put last September behind him. That was when Bowyer's intentional spin late in the last race before the playoffs jumbled the finishing order, and the drivers who made the Chase, leading to a NASCAR investigation.

Instead of a clean run, Bowyer hit rookie pole-sitter Kyle Larson on the opening lap, sending Larson spinning. He also twice pitted under a green flag, right before a caution flag came out, and was battling Danica Patrick for 38th place when a fire in his engine ultimately caused him to park for the night.