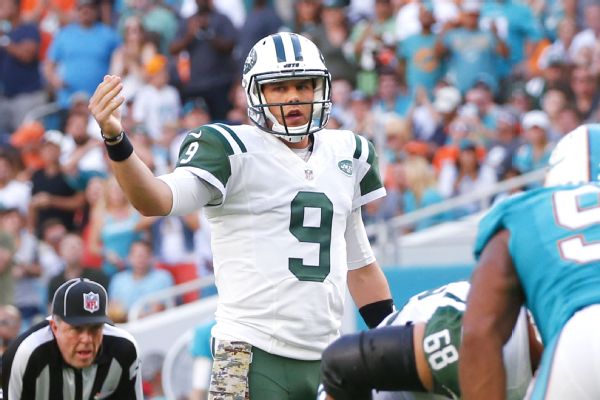 Fitzpatrick, who is active and will back up Petty, was injured last Sunday in a loss to the Miami Dolphins, but he finished the game and practiced every day, albeit on a limited basis. He had said he was "definitely optimistic" about playing.

Nevertheless, coach Todd Bowles said he wanted to wait until Sunday to make a decision. Fitzpatrick and Petty received an even number of practice reps during the week, according to Bowles.

By the end of the week, Fitzpatrick was trending toward starting, but he apparently wasn't able to convince Bowles.

This should be a popular decision with the fan base, which has been screaming for Petty to start. Fitzpatrick has thrown a league-leading 13 interceptions, and the Jets begin the day at 3-6, seemingly out of playoff contention.

If Petty plays well, it will complicate things for Bowles, who has remained steadfastly committed to Fitzpatrick despite his struggles. Bowles has made it clear he believes Fitzpatrick gives them the best chance to win.

The Jets have a bye week to sort it out. After Sunday, they don't play again until Nov. 27 against the New England Patriots.

Petty, a fourth-round pick out of Baylor in 2015, has played only four regular-season snaps -- all last week. He played well in the preseason and moved up to No. 2 when Geno Smith, starting for the benched Fitzpatrick, suffered a season-ending knee injury on Oct. 23.

After backing up Robert Griffin III early in his college career, Petty became Baylor's starter in 2013 and 2014. He passed for more than 8,000 yards, 61 touchdowns and only 10 interceptions as a junior and senior.