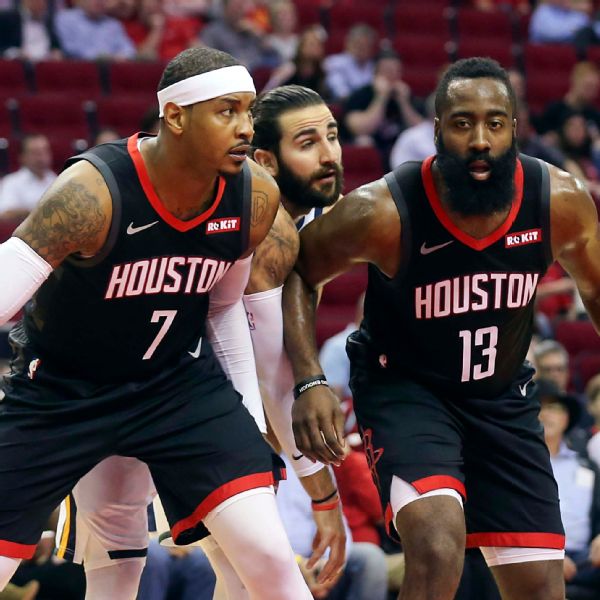 James Harden says he thinks former Houston Rockets teammate Carmelo Anthony can still help a team and he hopes that the 10-time All-Star finds another home this season.

"I just want to see him hoop, see him happy, and I mean, he deserves it, honestly," Harden said of Anthony on Tuesday. "Like, he's put so much time and effort into this game that he should be able to hoop and still have fun playing the game of basketball."

Houston traded Anthony and cash to the Chicago Bulls on Tuesday.

The trade ended Anthony's short tenure with the Rockets. He played just 10 games for Houston before agreeing to part ways with the club. At the time, GM Daryl Morey said that the fit the Rockets envisioned with Anthony never materialized.

Harden was asked Tuesday whether he was disappointed with how things ended for Anthony in Houston.

"Yeah, man. Melo is one of the best to ever hoop. He loves the game of basketball," Harden said. "Some guys just do it just because they're gifted or they're athletic or they can shoot the basketball. There's not that many players that like, love to hoop. ... It kind of sucks that it didn't work out. It is what it is. I just hope he finds somewhere where they can embrace him and he can still hoop. So he [gets to] make that decision that he's done [playing]."

Anthony will not play a game for the Bulls, who will eventually trade or waive him before the Feb. 7 trade deadline, league sources told ESPN's Adrian Wojnarowski.

Harden said that Anthony "for sure" can still help a team.

Added Rockets coach Mike D'Antoni: "Sure, he's a great player. Why wouldn't he be able to?"

"Just wasn't a good fit," D'Antoni said. "And upstairs saw it and did something. He did everything possible to make it work, and it just didn't."

D'Antoni and Anthony clashed during the end of the coach's tenure with the New York Knicks in 2012. But both Anthony and D'Antoni said those issues were behind them when Anthony was in Houston.

The Bulls will not immediately waive Anthony and could use the 15-year veteran in a one-for-one trade before the trade deadline, sources said. If no trade materializes, Anthony will be free to sign with any team after Chicago waives him.

The Los Angeles Lakers have an interest in Anthony but have no plans to waive a player to create an available roster spot for him, league sources told Wojnarowski. If a roster spot becomes available with the Lakers before or after the trade deadline, they'll be a possible destination for Anthony, league sources said.

Harden: Carmelo still passionate, deserves to be happy
James Harden says it "sucks that it didn't work out" for Carmelo Anthony and the Rockets, but wants him to be happy playing elsewhere.