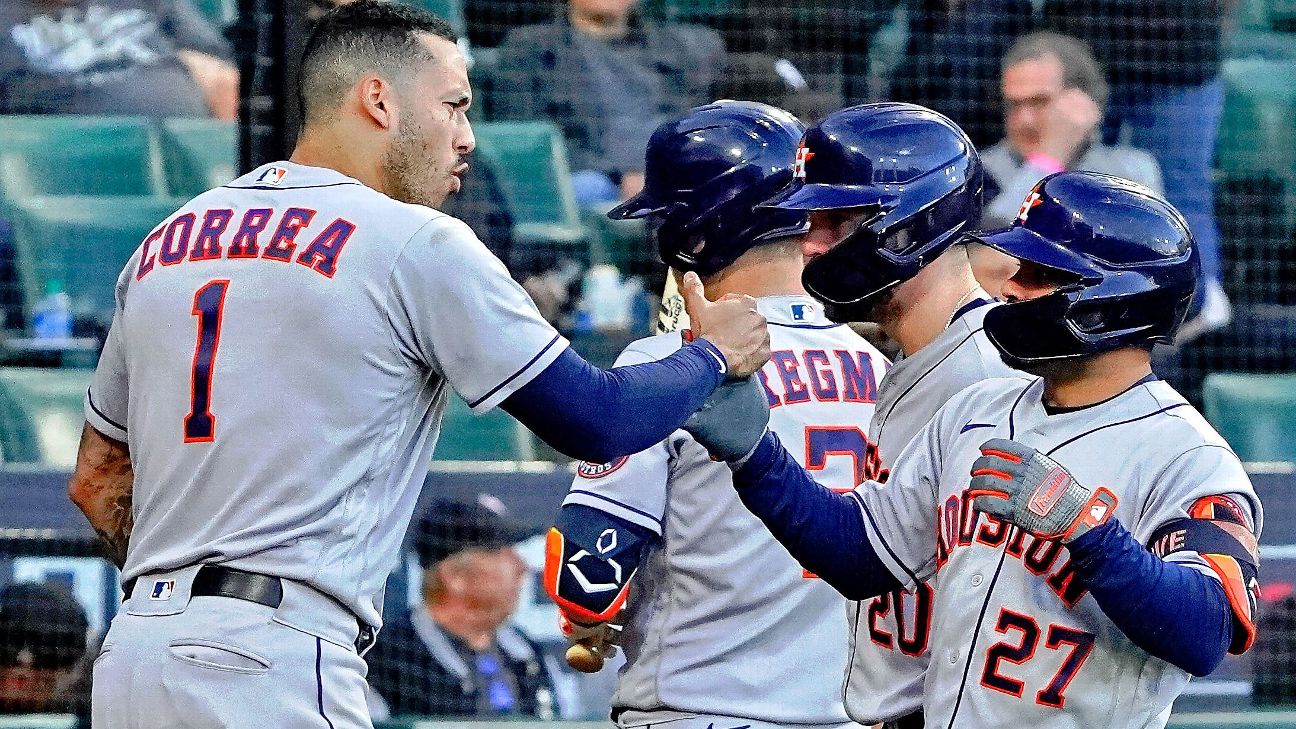 The Houston Astros advanced to their fifth consecutive American League Championship Series on Tuesday by beating the Chicago White Sox 10-1 in Game 4 of their best-of-five division series matchup.

The Astros are the third team to appear in five straight league championship series and the first to do so since the Atlanta Braves reached eight straight from 1991 to 1999.

But McCullers left the gamein Chicago after four innings due to right forearm tightness. His status for the ALCS is unclear.

"I just started getting tight at the beginning of the [fourth] inning," McCullers said. "I got out of it.

Astros manager Dusty Baker had no intention of pulling McCullers after just 73 pitches but was ultimately forced to do so.

"That was disheartening news to me when the trainer came over and said that we got to take him out of the game," Baker said. "Lance is a warrior, and for him to come out of a game of that magnitude, you know it had to be something, and we tried to stop it before it got serious. He is being evaluated now."

Houston erased a 1-0 deficit in the third inning when shortstop Carlos Correa doubled to left with the bases loaded on an 0-2 pitch by White Sox starter Carlos Rodon. The Astros added to the lead in the fourth when third baseman Alex Bregman doubled on a 3-0 pitch by reliever Garrett Crochet with two men on. Both scored.

Jose Altuve sealed the series with a three-run homer off Chicago closer Liam Hendriks in the top of the ninth.

"It's really special," Correa said of winning the series. "I will never take these moments for granted, and I'm going to enjoy it with my teammates as much as I can. This is a special team, special organization."


Warnings were issued to both teams after Astros reliever Kendall Graveman hit White Sox first baseman Jose Abreu in the bottom of the eighth. White Sox manager Tony La Russa was convinced the Astros hit Abreu on purpose and argued his case, both to the umpires during the game and to reporters afterward.

"It will be a good test of the character and credibility of the winning team because it was intentional," La Russa said. "Catcher kept looking in the dugout, so they did hit him intentionally.

"I'll be really curious. They should have the guts to admit that they did it."

When informed of La Russa's comments, Baker pushed back on the idea that the up-and-in pitch had intent.

"I beg to differ with Tony," Baker said. "There was no intent, and there was no reason to do that. Zero."

After leading the American League in ERA during the regular season, the White Sox's rotation struggled over the four games. They're the fifth rotation ever to compile an ERA above 10.00 (10.22) over the first four games of a playoff series.

La Russa was asked what was the difference in the series.

"More than anything else, two-out hits," La Russa said. "You know, count the number of RBIs that we gave up with two outs, couldn't get that last out. Count them today; big difference-maker."

The White Sox also didn't get enough production from their hitters in their three losses, especially from the right side of the plate. Righties hit .295 off Houston's right-handed pitchers, but that also was their slugging percentage. They produced only singles.


Next up for the Astros -- looking for the franchise's second championship after winning it all in 2017 -- is Game 1 of the ALCS against former bench coach Alex Cora and the Boston Red Sox on Friday in Houston. The Red Sox eliminated theTampa Bay Rayswith a 6-5 victory in Game 4 on Monday night.

"They know how to play the game,'' Altuve said of Boston. "They've been in the playoffs before, so it's going to be fun.''

Houston opened as a -150 series favorite at Caesars Sportsbook. The Red Sox are +130. It'll be Houston's second ALCS under Baker.

Baker replaced AJ Hinch, who was fired in the fallout from the Astros' 2017 sign-stealing scandal that also resulted in a one-year ban for Cora.

The crowd at Guaranteed Rate Field chanted, "Cheater! Cheater!'' at times during the two games in Chicago, and White Sox reliever Ryan Tepera implied late Sunday night that Houston might have been stealing signs in Games 1 and 2.

The Astros were asked if that kind of negativity fuels them.

"We don't pay too much attention to that," Correa said. "In the clubhouse, it's all positivity. We love each other and care for each other. We have each other's back, and that's the most important to us."