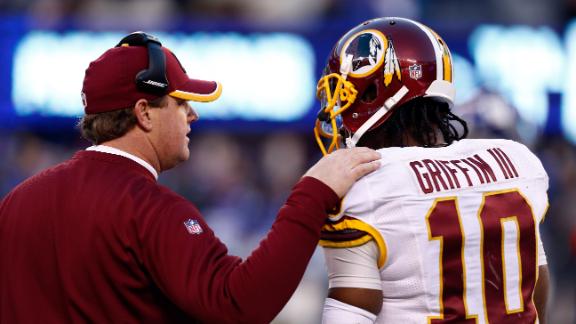 ASHBURN, Va. -- On Tuesday, quarterback Robert Griffin III explained his rationale for staying off social media. He was tired of having his words twisted or scanned for deeper meaning.

A day later, his coach expressed a similar sentiment.

When Jay Gruden was asked about outside perceptions of his relationship with Griffin, he said he was only worried about coaching him. But Gruden also said regardless of what he says about Griffin, it gets taken to an extreme.

Griffin will start Saturday's game against Philadelphia, his first start since being benched after the Nov. 23 game at San Francisco.

It hasn't always been necessary to twist Gruden's words. He has been direct about the state of Griffin's game on multiple occasions this season, none more so than the day after a 27-7 loss to Tampa Bay on Nov. 16.

"Robert had some fundamental flaws," Gruden said then. "His footwork was below average. He took three-step drops when he should have taken five. He took a one-step drop when he should have taken three on a couple occasions, and that can't happen. He stepped up when he didn't have to step up and stepped into pressure. He read the wrong side of the field a couple times. So from his basic performance, just critiquing Robert, it was not even close to being good enough to what we expect from the quarterback position."

Later that week, Gruden told NFL.com that Griffin had been coddled for a long time -- due to his success -- and that "he's auditioned long enough. Clock's ticking."

Gruden also referred to Griffin in that interview as "very raw."

But Gruden has realized there is an intense interest in Griffin and that any comments about him get parsed for extra meaning. That's why for Gruden the focus is on just coaching the player.

"I've got a ton of respect for Robert, man, and for what he goes through at the quarterback position, what he has already accomplished as a young quarterback and what he is going to accomplish in the future," Gruden said. "How we coach them in here is how we coach him, but we can't let the outside world affect what we do in here. And the whole idea of coach/player relationship is to get better every day and work on our game, work on what I do, work on what I can do to make him better, and that's the bottom line. That's all we can do. That's all we want to do."