Fort Wayne shocks No. 3 Indiana in OT for program's first win over a ranked team 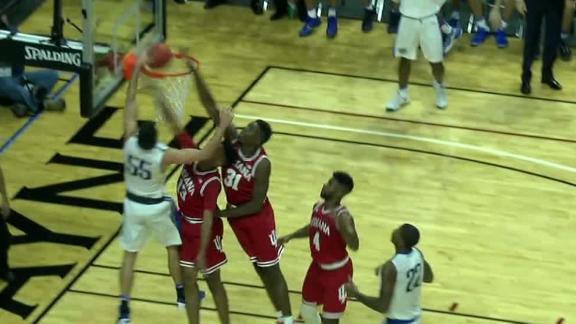 FORT WAYNE, Ind. -- When Fort Wayne's John Konchar stole the final inbounds pass Tuesday night, he did the first thing that came to mind -- tossed the ball into the air to run out the clock.

The ensuing celebration was something nobody outside the Mastodons' locker room anticipated.

Konchar made a tiebreaking free throw with 1:19 left in overtime, DeAngelo Stewart scored his only points on the last two foul shots of the game, and Konchar's steal secured the biggest victory in school history: Fort Wayne 71, No. 3 Indiana 68.

"It was special watching these guys during our timeouts and you could see their hearts pouring out of their eyes to go and attack the game," said Jon Coffman, the coach at Indiana-Purdue-Fort Wayne.

His team toppled Indiana with grit -- and pulled off the biggest shocker in college basketball so far this young season.

Fort Wayne (3-2) trailed for just 90 seconds against an in-state power and won despite making only two baskets over the final 14 minutes.

The Mastodons, who moved from Division II to Division I in 2001-02, had lost all nine previous games against ranked foes and hadn't even played a Top 25 opponent in almost four years.

None of those things mattered Tuesday when they walked into Memorial Coliseum and saw their home court surrounded by a sea of Indiana cream-and-crimson attire.

Coffman thanked Indiana coach Tom Crean for even playing a mid-major program on the road.

And Crean said he knew before the game his team was going to learn a lesson -- one way or another.

And despite getting 18 points and 12 rebounds from center Thomas Bryant and 16 points from Robert Johnson, that still wasn't enough for the Hoosiers (3-1).

"They just absolutely came out and put us on our heels from the beginning," Crean said. "We were not as locked into the personnel and the block outs as we needed to be. If we make our free throws, it's a different result. But we didn't and they earned it."

The Hoosiers forced overtime by closing regulation on a 13-3 spurt to make it 65-all.

But after each team opened overtime with a 3-pointer, the Hoosiers didn't score again, and the Mastodons made three free throws to win it.

"Right now, I can't even describe how I'm feeling. I'm overwhelmed," Scott said, seemingly speaking for the whole Fort Wayne contingent. "I knew we had the talent to do it. I knew we had the ability to do it."

Indiana: The Hoosiers flopped in their first "true" road game. The offense looked stagnant and they spent nearly the whole night playing catch-up. Now they'll have to wait and see how much this loss hurts them in the rankings.

Fort Wayne: Mastodons fans rushed the court after the upset. The preseason Summit League favorites have a chance to build on this momentum and gain more confidence to win big games.

Officially, the Hoosiers traveled nearly 200 miles to play a home game. Indiana sold more tickets to the game and played its customary pregame video on the board above midcourt. But the school's first appearance in Fort Wayne since beating Notre Dame in 1967 wound up leaving Indiana 7-2 all-time in the city.

One problem for the Hoosiers was they played short-handed. Crean started forward OG Anunoby even though he wasn't feeling well. Anunoby played just 13 minutes because Crean quickly realized that one of his best players just couldn't fight through the illness.

Fort Wayne: "I wish he (Konchar) would shoot more. Could you put that in the paper, 'John shoot more?'" Coffman said.

Indiana: "We needed to make the next pass (on drives), and we didn't do that, and frankly I'm embarrassed by that. That's not how we play," Crean said.

Indiana: Hosts Mississippi Valley State on Sunday. After this loss, the Hoosiers need to find a way to rebound.

Fort Wayne: Hosts Mississippi Valley State on Saturday. The Mastodons are hoping to build off the momentum from this win in their third straight home game.