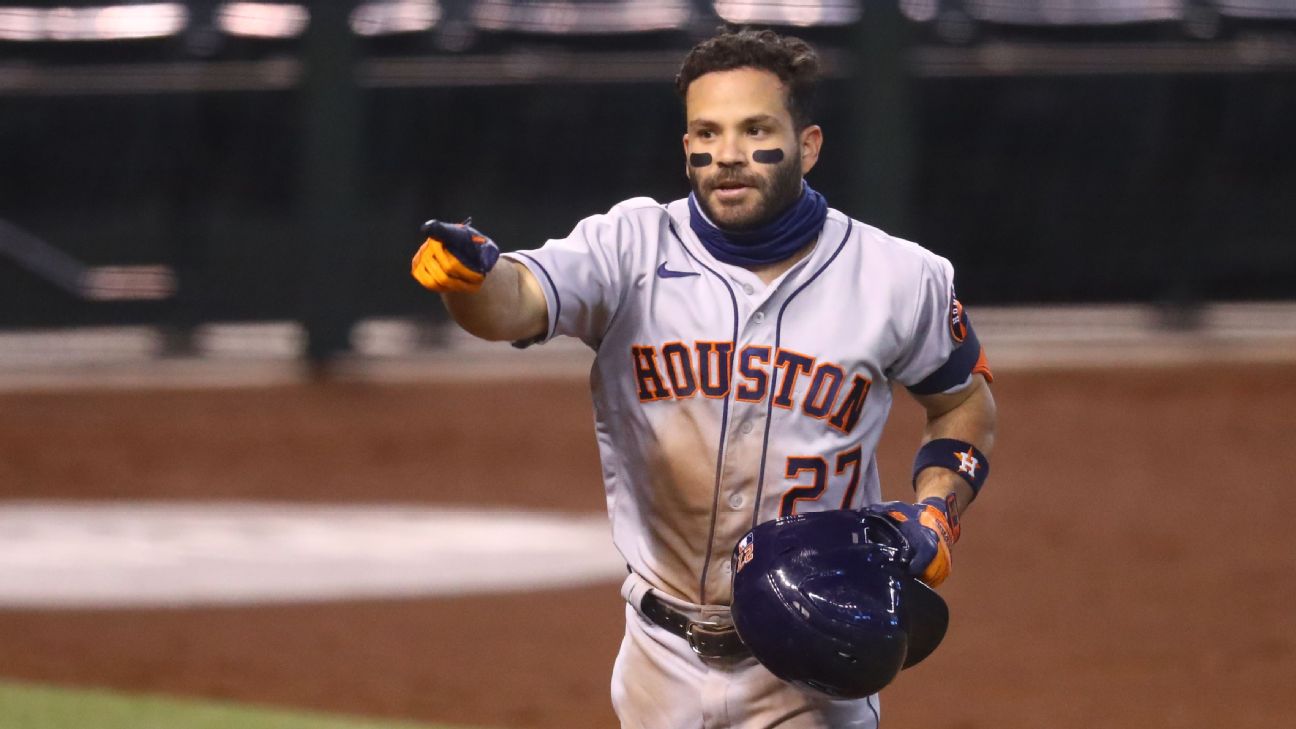 The numbers stand out more than they normally would after 16 Major League Baseball games -- for reasons we are all too familiar with that involved banging garbage cans and other Houston Astros-related nonsense in 2017 and into the 2018 season:

Those were the batting averages for three of the Astros' All-Stars following Monday's win, and let's just say those numbers -- along with Houston's 7-9 record -- were putting smiles on the faces of baseball fans across America, even if those fans can't attend games to boo the Astros.

Do those low batting averages mean anything after barely two weeks of action? Other than giving fans a chance to scream "Cheaters!" at their television sets, that is? After all, Anthony Rendon is batting .143, Eugenio Suarez is hitting .132, Gleyber Torres and Christian Yelich are both at .157, Rafael Devers is at .175, and Cody Bellingeris at a meager .176 with little power output. All superstar hitters last year and bums so far in 2020. Nobody is calling them cheaters.

"It's definitely a tough spot for us right now," outfielder Josh Reddick said after Sunday's brawling loss to the A's to complete Houston's getting swept. "We really haven't hit our stride yet this year. Our offense is also struggling. We're trying to work around a lot of these injures we have where our pitching staff has taken a hit. That can't be a crutch we can lean on right now."

The Astros warrant a closer look, however, given the scandal that erupted in the offseason. Even though the commissioner's final report proclaimed that nothing untoward happened in 2019 -- when the Astros led the majors in batting average, on-base percentage and slugging percentage -- a cloud hangs over any struggling player. Let's dig into some of the numbers (through Sunday's game) and see what we find.

The three-time batting champ is coming off a 2019 season in which he hit .298 with a career-high 31 home runs, but he is striking out 20.6% of the time, well above his career mark of 11.5% and 15% rate of last season. Fewer balls in play are going to hurt his batting average, but using data through Sunday's action, let's check out two advanced metrics --expected batting average (based on the quality of his balls in play) and hard-hit rate (percentage of balls hit at 95 mph or better) -- to see how much bad luck he has been hitting into.

Altuve has hit into a little bad luck -- the difference between .182 and .226 in 66 at-bats is just three hits -- but he's also not hitting the ball hard. But you know what? He doesn't usually hit the ball that hard, ranking in the 28th percentile last year, even with those 31 home runs. What he does is put the ball in play, find gaps and pull his home runs over that short porch in Houston (18 of his 31 home runs came at home).

Altuve had an even worse stretch last season, batting .162 with one home run from April 20 to May 10. In 2017 and 2018, however, he had no 15-game stretches in which he hit under .200, so a bad two-week stretch from him is unusual. Keep in mind, though, that Altuve was reportedly one player who didn't partake in the sign-stealing scandal. He's swinging and missing a little more than normal and hitting a few too many balls in the air.

Like Altuve, Bregman's batting average isn't really the result of too much bad luck. Like Altuve, Bregman doesn't rank particularly high in hard-hit rate, but he didn't last year either, when he ranked in the 42nd percentile of major league hitters. Bregman and Altuve don't rely on raw power to do their damage, but they do rely on putting more balls in play than your typical 2020 slugger. Bregman also has a keen eye at the plate and was one of a handful of players last season with more walks (119) than strikeouts (83). Through Sunday, however, he has more strikeouts (11) than walks (seven).

The one number that stands out: His chase rate on pitches out of the strike zone is up slightly, which isn't good, but his contact rate when chasing is down significantly -- from 71.7% last year to 64.3% this year. That means a few more swinging strikes, a few fewer balls in play and a few fewer at-bats in which he's ahead in the count. Sure, knowing what pitch is coming will help a hitter zone in, but these are all easily correctible issues that aren't a concern yet in a small sample.

Springer has had a little more bad luck. He should be hitting .241 instead of .182. He also missed his fourth straight game on Monday because of a sore wrist. His hard-hit rate, however, is down from the 82nd percentile in 2019. Springer had a slow start (1-for-21 to begin the season) but started heating up before the injury. Given the lack of game action before the season started, a slow start in 2020 is more excusable than in a normal season. Springer's average launch angle is up quite a bit, so it looks like he was failing to barrel up some balls early.

The Astros snapped their five-game losing streak with a 6-4 win over the Giants on Monday. They hit .193 in the streak, dragging down the stats of the entire lineup -- a lineup still without Yordan Alvarez, by the way. Altuve went 1-for-5 with two strikeouts. Bregman went 1-for-3 with a walk and a soft, line-drive double down the left-field line. Of the three, Altuve is the one in the deepest struggles right now, and given that he's 30 years old, you have to worry slightly about his age and some of the injuries he has dealt with the past two seasons. But let's just call it a slow start -- even if any slump from Altuve is out of the norm.

It's too early to be concerned about an offense that was one of the best of all time in 2019. The bigger concerns for the Astros are a bullpen that has featured nine pitchers making their major league debuts so far and a rotation without Justin Verlander. It isn't a good sign that Josh James, who began the season in the rotation before being moved back to relief, had another terrible outing, allowing four runs in his inning of work.

"A lot of the guys, myself included, have to step up and start driving in some runs and giving the pitching staff a break," Reddick said. "We need to have a blowout game where we give those guys a break and take the pressure off, so to speak."

Monday's win helps. Even in the short season, there is still plenty of time to get things turned around and prove that this is still the lethal lineup we've seen the past three years. 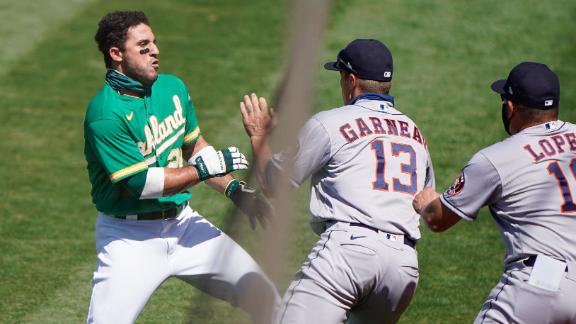 A's Laureano charges Astros dugout, fight ensues
After Ramon Laureano is hit by a pitch for a second time, he exchanges a few words with the Astros before rushing at the Houston dugout in anger and causing a fight.
Report a correction or typo
Related topics:
sportsespnalex bregmanmlbjose altuvegeorge springerhouston astrosdaily
Copyright © 2021 ESPN Internet Ventures. All rights reserved.
More Videos
From CNN Newsource affiliates
TOP STORIES