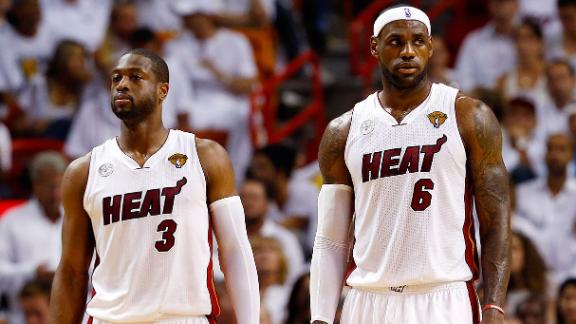 Even before LeBron James told him he'd be going back to the Cleveland Cavaliers, Dwyane Wade said he could tell his teammate and friend would not be returning to the Miami Heat.

Wade said Friday that he could just tell from James' body language during a flight from Las Vegas that he would not be coming back.

"Yeah, I went to sleep knowing," Wade told reporters. "He called me the next day. But I knew then. Obviously he still had to say the final yay or nay, but I knew. I could tell."

It'll be up to Wade, Chris Bosh and a new support group that includes free-agent acquisitions Luol Deng, Josh McRoberts and Danny Granger to try to extend the Heat's run of consecutive NBA Finals appearances to five. With James, Miami won two titles in four seasons.

Wade said he did not make any pitches to get James to stay.

"It was a different summer for us," Wade said. "It's no secret, obviously; it's been a change in how we looked the last four years by losing LeBron to Cleveland. I think our ownership has done a great job so far of trying to not replace but recover from that. The only thing we do as a franchise and as players is we move forward."

Wade Knew James Was Going To Leave
Dwyane Wade discusses when he knew LeBron James was going to leave the Heat and that he was supportive of his friend's decision.