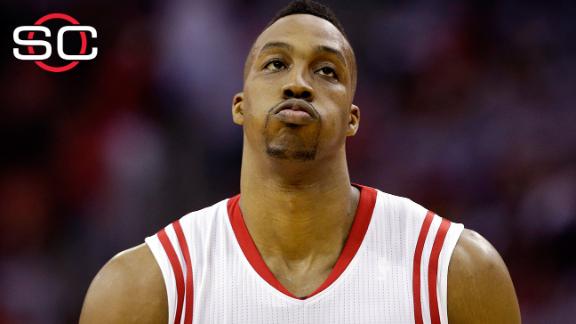 HOUSTON -- Houston Rockets center Dwight Howard has been suspended for the 2015-16 season opener because he collected his fourth flagrant foul point during the 2015 postseason, the NBA announced Friday.

The league reviewed a common foul Howard committed while setting a pick on Golden State Warriors forward Andre Iguodala in the fourth quarter of Wednesday's Game 5 of the Western Conference finals and upgraded it to a flagrant foul 1.

Howard hit Iguodala in the neck area with a forearm with 3:35 to play in the fourth quarter.

"I can't do nothing about it now, the playoffs are over with for us," Howard said. "We had a great run, so despite getting whatever happens next year for one game, its not going to take away what we did this year in the playoffs."

Also, the league rescinded the technical fouls Howard and Warriors center Andrew Bogut received in the second quarter of Game 5.