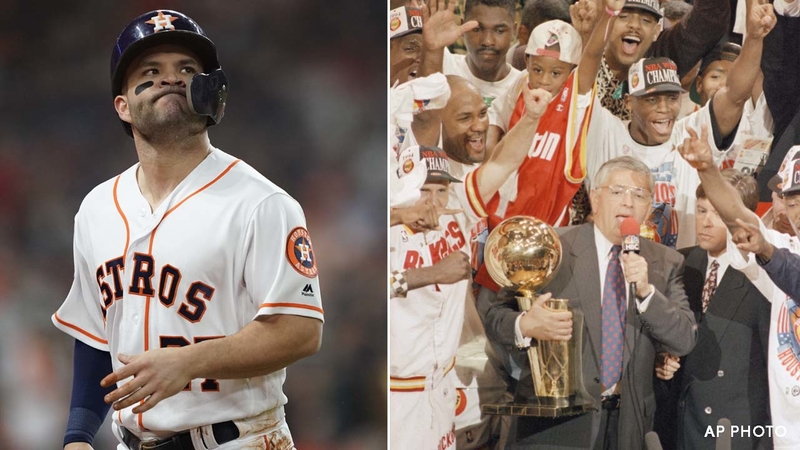 HOUSTON, Texas (KTRK) -- Fans of Houston sports teams know heartbreak well. But they also know triumphs when nobody expected them.

If you're an Astros fan, you might have a familiar sinking feeling after Wednesday night's World Series game versus the Washington Nationals.

To be fair, the Astros are still in it.

But if you need something to help you keep the faith through the series, you may just need to look back to the 1994 Houston Rockets, when "Choke City" became "Clutch City."

In 1994, the Rockets blew their Game 2 lead of the Western Conference semifinals, leading to the embarrassing "Choke City," which also was a nod to our bad luck with sports (do the Oilers in the playoffs ring a bell or even previous blown leads by the Astros?)

The Rockets were down two games in that series, putting them in a position where they had no choice but to win on the road.

But when you have names like Hakeem "The Dream" Olajuwon, Kenny Smith, Robert Horry, Sam Cassell and Mario Elie on your team, you don't stay worried for long.

Not only did the Rockets go on to win that series, proving just how "clutch" they are, they took the whole thing, winning their first NBA championship and going on to repeat in 1995.

Cue the 2019 Houston Astros, who could use the 1994 Rockets for some inspiration right now.

The Astros are down 0-2 in the series with the Nationals and they're heading to the Nats' home turf for their next two games.

But if there's any team that can come up clutch, we know it's the 'Stros.

After all, they've got the support of the fans and their fellow Houston pro athletes in different leagues behind them.

While you keep hope alive, watch the video above to relive the magic that was the Rockets' 1994 championship run.