Doug Pederson: 'Not everybody' on Eagles played hard in loss 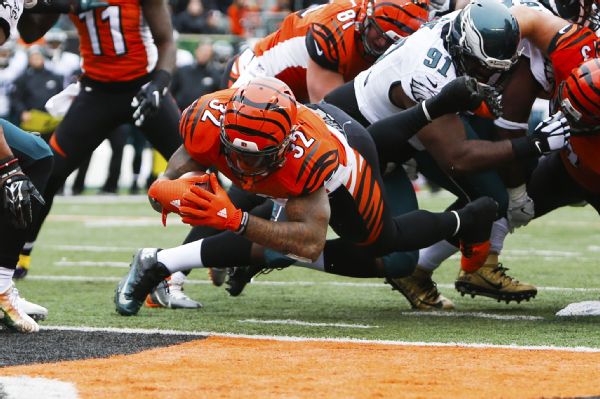 PHILADELPHIA -- Doug Pederson's narrative that the Eagles gave full effort in a 32-14 loss to the Cincinnati Bengals on Sunday came crashing down at the tail end of his day-after press conference.

The head coach was asked if he could honestly say that everyone on the team played hard after reviewing the game film.

"Not everybody. Not everybody," he acknowledged. "And that's the accountability that I talk about. I hold coaches accountable for that, I hold myself accountable for that because it all starts with me, and I pride myself each week to make sure the guys are ready to go. But at the same time, it comes down to, it's a mentality by each individual player."

The Bengals were without star receiver A.J. Green and running back Giovani Bernard and had been struggling to generate offense heading into the game. Quarterback Andy Dalton (23-of-31, 332 yards, two touchdowns), though, was able to slice right through the Eagles' defense, which yielded 32 points to a team that managed just 26 points total in the previous two weeks.

On a two-yard touchdown run by Jeremy Hill in the first quarter, it appeared safety Rodney McLeod -- the last line of defense -- held up instead of taking on the rusher near the goal line.

The play that has gotten the most attention came on the offensive side of the ball. On a first-quarter scramble by Carson Wentz, tight end Zach Ertz had a chance to take out linebacker Vontaze Burfict, but allowed him to pass by as Wentz sprinted toward the sideline.

"Looking at the tape and watching where Carson was scrambling, and of course he was heading towards out of bounds, and I think he just pulled off at that point, that's all I can say. But I'm definitely going to ask him why [he didn't block Burfict]," Pederson said.

"If he can pick up a block, obviously, we ask our guys to turn and block. We don't ever want anybody to block from behind or anything like that, but at the same, try to find a block downfield if they can."

"I could see that Carson was easily going to make it out of bounds, and thought the play was over by the time I reached Burfict," Ertz told ESPN. "Carson and I have discussed it and there are no issues. Our full attention is now on beating Washington."

Immediately following the lopsided loss to a Bengals team that entered the game 3-7-1, Pederson said effort was not the issue. He stayed true to that message for the majority of his Monday press conference as well.

His comments at the end of the 18-minute session, however, revealed that there were exceptions.

"I think it's both," said Pederson, when asked if a team needs to be "loved up" or tough love in a situation like this. "I think there's a level of that tough love. There's got to be that accountability that I was talking about. You know, I implore and I challenge the leaders of the football team to stand up and really not only hold themselves [accountable] but the rest of the team. Listen, it's not a panic move or anything like that, but just, 'Hey, let's just make sure we're doing things right.' Everybody just do things right, do their jobs, do their assignments, you know, and good things are going to happen.

"Obviously, again, it starts with me, and I've got to make sure that I'm doing it right and I'm holding myself accountable, and as you mentioned earlier with [owner] Jeffrey [Lurie] and [vice president of football operations] Howie [Roseman], if they're holding me accountable and all that, that's where it starts, and then I relay that message to the assistants and on to the team."

When Pederson was asked if he feels that he has job security beyond this season, he said, "For sure. Yeah," adding that management has reinforced that with him.
Related topics:
sportsespncincinnati bengalscarson wentznflrodney mcleodvontaze burfictdoug pedersonphiladelphia eaglesjeremy hillzach ertz
Copyright © 2022 ESPN Internet Ventures. All rights reserved.
TOP STORIES
Daylight shows home destroyed after standoff with shooting suspect
What we know about man accused of shooting 3 HPD officers
Suspect arrested after 30-minute chase ends on I-45 in Texas City
Clouds clearing today, sunny through the weekend with rain next week
5 people charged in connection with Pct. 5 corporal's murder
How many times can I reuse my N95 mask?
Decades after TV anchor disappears, convicted rapist denies connection
Show More
Driver dies after slamming into 18-wheeler's trailer on US-59
Woman shot in the shoulder during robbery set up in SW Houston
Prepare for a major closure at I-69 and 610 West Loop this weekend
Officers escort body of corporal killed in ambush to funeral home
ABC13 obtains HPD scanner traffic of chase that led to shootout
More TOP STORIES News