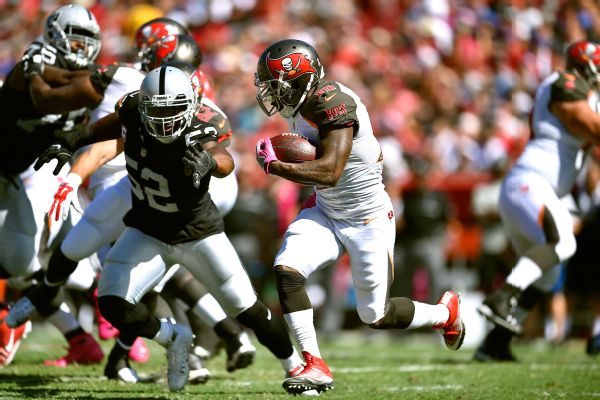 TAMPA, Fla. -- As if the Tampa Bay Buccaneers' running back situation couldn't possibly get any worse, another one likely has been lost for the season. Antone Smith suffered a knee injury in Thursday night's 43-28 loss to the Atlanta Falcons.

"Unfortunately, Antone suffered a significant injury and I think that would probably be a season-ending injury, it looks like," head coach Dirk Koetter said Friday. "That would be the same for [defensive end] Howard Jones, a season-ending [knee] injury."

Smith rushed for 25 yards on five touches, averaging 5.0 yards per carry. He caught three passes for 27 receiving yards before leaving the field on a cart. He was used primarily as the team's third-down back.

It is unclear when Jones -- who had five sacks last season -- suffered his injury, but he was seen leaving the locker room on crutches, as was Smith.

The Bucs' running backs have been decimated by injuries. The team's starter, two-time Pro Bowler Doug Martin, has been out with a hamstring injury since Week 2. His replacement, Charles Sims, was placed on injured reserve after suffering a knee injury against the Denver Broncos in Week 4. Jacquizz Rodgers, the team's third running back to start a game this season, suffered a sprained foot against the Oakland Raiders in Week 7.

Koetter was asked if he'd ever seen so many injuries to one position before.

"I haven't seen it," Koetter said. "For whatever reason, we're being hit hard at two positions. Running back and defensive end have been the positions that we've been hit really hard on. Other teams in the league have their issues at different positions, but I've never seen where we're a one-back team and we have four running backs go in one year. I've never seen that."