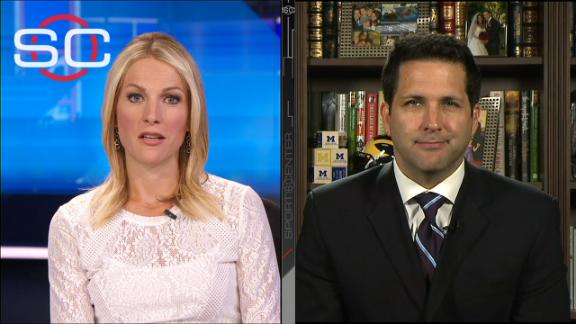 ENGLEWOOD, Colo. -- The Denver Broncos announced Mark Sanchez will start at quarterback in Thursday's preseason opener against the Chicago Bears.

Earlier on Tuesday, Kubiak told reporters that Sanchez and Trevor Siemian will each play one quarter, with rookie Paxton Lynch set to play the second half of the game.

In training camp practice on Tuesday that was open to the public, it was Sanchez who took virtually all of the work with the starting offense.

In the Broncos' first depth chart of training camp, released Monday, Sanchez and Siemian were listed as co-No. 1s.

The two quarterbacks have split virtually all of the plays with the starting offense in training camp, with Lynch getting a smattering of plays. But Tuesday, Sanchez clearly took more work with the starters in the team drills as the Broncos went through a variety of situations.

Both Sanchez and Siemian were sharp in the workout and threw the ball well.

"One of them is going to play with those guys, and one of them is not," Kubiak said of the quarterbacks' working with the starters. "...They've been practicing with all of them, so it really doesn't matter. The majority of this game will be about our 2s and 3s."

Kubiak said people should not read into which quarterback starts against the Bears. "What we're going to try to do is put a number on reps and what we want to see from each one of them," he said.

Sanchez, with 72 career regular-season starts, is the only one of the three quarterbacks who has thrown a pass in a regular-season game. As a rookie, Siemian played one play last season for the Broncos, and it was a kneel-down. Lynch was the Broncos' first-round pick in this year's draft.

Asked Monday what he thought would matter in Kubiak's decision to name the starting quarterback, Sanchez said it would be everything he does in practice and in a game.