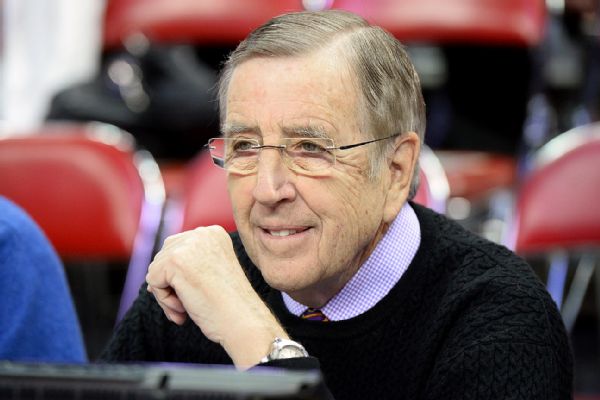 Brent Musburger, one of the most recognized and prominent voices in the history of sports television, will end his play-by-play career with ABC/ESPN at the end of January, it was announced Wednesday.

Musburger, 77, who brought his folksy delivery to countless games -- most beginning with his "You are looking live" catchphrase -- since entering the national stage in 1975, will call his final game Jan. 31 on ESPN as theKentucky Wildcats host Georgiaat Rupp Arena(9 p.m. ET).

"What a wonderful journey I have traveled with CBS and the Disney company," Musburger said in a statement. "A love of sports allows me to live a life of endless pleasure. And make no mistake, I will miss the arenas and stadiums dearly. Most of all, I will miss the folks I have met along the trail."

Musburger told The Associated Press that he plans to move to Las Vegas and help his family start a sports handicapping business.

A member of the National Sports Media Association Hall of Fame, Musburger joined ABC in 1990 after a long stint in which he was the lead voice of CBS Sports. He also received the National Football Foundation and College Football Hall of Fame Outstanding Contributor to Amateur Football Award in 2011 and theVin Scully Lifetime Achievement Award in Sports Broadcasting in November.

For ABC, ESPN and the SEC Network, Musburger has hosted and/or called play-by-play for the NBA, college football (including seven BCS Championship Games) and basketball, golf, NASCAR and IndyCar races and the 2006 FIFA World Cup. He called the Little League World Series from 2000 to 2011. He also hosted Super Bowl XXV's pregame and halftime shows as well as the 1991 Pan Am Games from Cuba.

With ESPN Radio, Musburger handled play-by-play for NBA games, including the NBA Finals, for many years. He also was theoriginal host of its daily "ESPN SportsBeat" segments.

"Brent's presence and delivery have come to symbolize big time sports for multiple generations of fans," ESPN president John Skipper said in a statement. "When he opens with his signature 'You are looking live,' you sit up straight in your chair because you know something important is about to happen.

"Brent's catalog of big events is unmatched, and he has skillfully guided us through some of the most dramatic and memorable moments in sports with his authentic and distinctive style. He is one of the best story-tellers to ever grace a sports booth. We and the fans will miss him."

During his 15-year tenure with CBS, Musburger was the host or had play-by-play duty on NFL games and the groundbreaking studio show "The NFL Today." He also worked the NCAA Final Four, tennis' US Open, the NBA, the Masters, the Belmont Stakes, College World Series and also did baseball play-by-play for CBS Radio.

"The biggest show of my life was 'The NFL Today,'" Musburger said. "It was the first of the live pregame shows, the live halftimes and the live postgame. So we were really the pioneers."

He has been behind the microphone for some huge moments in sports, including Doug Flutie's Hail Mary pass for Boston College that beat Miami in 1984, as well as Villanova's historic NCAA championship upset over Georgetown in 1985.

"Brent made every event feel larger,'' said Stephanie Druley, ESPN senior vice president for events and studio production. "To me, there is probably not a greater storyteller as a play-by-play person. He can spin a yarn like nobody else, and it made games definitely more enjoyable to watch.''

His career hasn't been without controversy, as Musburger admittedly didn't "shy from an opinion" -- such as his comments about Oklahoma's Joe Mixon during the recent Sugar Bowl after surveillance video of the Sooners running back punching a woman in 2014 was released in December.

"I am not shy from an opinion," Musburger said. "And I know many of my opinions are gonna be controversial, 'cause there are many people who don't like them."

Musburger, a graduate of Northwestern University's Medill School of Journalism, started his journalism career at the Chicago American newspaper but soon thereafter joined Chicago's WBBM-TV as sports director in 1968. He then moved to KNXT-TV in Los Angeles, where he served as co-anchor of the nightly news alongside Connie Chung.

"Nothing in the world replaces the friendships I've made -- with crews and people," Musburger said. "And that includes the fans. I mean, I'm never alone. Wherever I go, someone's gonna come up. Someone's gonna come up and ask about a team. Or a game. Or an experience. I've got millions of friends out there, OK?"

Brent Musburger never shy from voicing his opinion
Brent Musburger says he knows that many didn't like how he wasn't afraid to give his opinions in his broadcasts.
Related topics:
sportsespnplay by playbrent musburgerespnabccbsnflcollege footballnfl todaymens college basketballbroadcasting
Copyright © 2022 ESPN Internet Ventures. All rights reserved.
TOP STORIES
Daylight shows home destroyed after standoff with shooting suspect
What we know about man accused of shooting 3 HPD officers
5 people charged in connection with Pct. 5 corporal's murder
Driver dies after slamming into 18-wheeler's trailer on US-59
Woman shot in the shoulder during robbery set up in SW Houston
Prepare for a major closure at I-69 and 610 West Loop this weekend
Officers escort body of corporal killed in ambush to funeral home
Show More
Clouds clearing today, sunny through the weekend with rain next week
ABC13 obtains HPD scanner traffic of chase that led to shootout
'Tiger King' Joe Exotic resentenced to 21 years in prison
10 injured in PA bridge collapse; human chain formed to help
Bayou Bistro and Bar owner killed in Texas City shooting
More TOP STORIES News