Brian Hoyer down to Texans or Jets 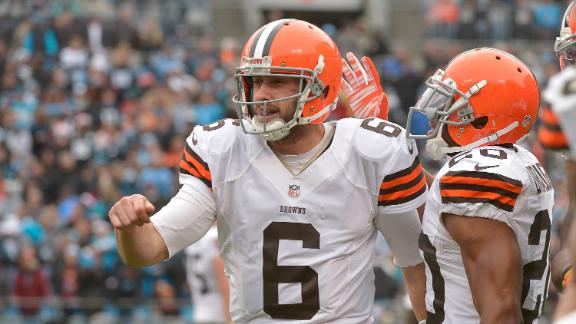 Brian Hoyer is leaning toward signing with the Houston Texans, but the free-agent quarterback also will field an offer from the New York Jets on Monday, sources have confirmed to ESPN.

The Texans still are expected to sign Hoyer, the former Cleveland Browns quarterback who is looking for an opportunity for a starting job.

Hoyer likely will have to compete for a starting job with either Houston or the Jets. The Texans brought back quarterback Ryan Mallett earlier Monday, agreeing to a two-year, $7 million deal with the quarterback, a source told ESPN. Mallett's deal includes $1.75 million in guaranteed money, according to a source.

If he chooses to sign with the Jets, Hoyer likely will contend with turnover-prone Geno Smith, who has been New York's primary starting quarterback in each of the past two seasons.

Hoyer, 29, won the starting job in Cleveland last season in a training camp competition with Johnny Manziel and got off to a fast start.

He brought the Browns back from a 27-3 halftime deficit to tie the season opener in Pittsburgh before the Steelers won on a last-second field goal, and guided the biggest road comeback in NFL history in a 29-28 win over Tennessee.

Hoyer threw three interceptions in Atlanta in November but led a last-minute drive that won the game. At that point, the Browns were 7-4 and in the playoff chase.

But he was yanked the following week in Buffalo, and his season was never the same. Hoyer played tight the next week against the Colts and lost his job as the starter to Manziel the next week. Hoyer returned only when Manziel pulled a hamstring after six woeful quarters on the field.

For the season, Hoyer threw for 3,326 yards with 12 touchdowns and 13 interceptions. His season rating was 76.5, which ranked 31st in the league. But Hoyer is the only one of the Browns' 22 starting quarterbacks since 1999 to have a winning record as a starter (10-6).

Hoyer spent three seasons as Tom Brady's backup and got his chance with the Browns in 2013. He led the team to wins over Cincinnati and Minnesota before tearing his ACL less than five minutes into a win over Buffalo.