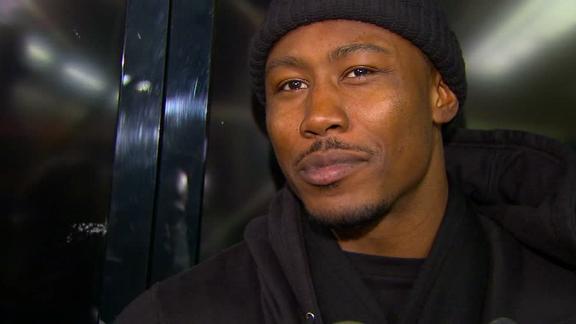 EAST RUTHERFORD, N.J. -- The Jets and Giants' rivalry got a little heated when Brandon Marshall and Cullen Jenkins nearly got into an altercation before halftime.

Marshall said he had to defend his wife's honor against the Giants' defensive lineman.

"I think there are some things that are off limits," the Jets wide receiver explained. "I believe in trash talk. Some guys get up for that. But some things are off limits. He made a comment about ... he said, 'My girl.' He didn't know I was married.

"There is not enough money on this Earth for somebody to disrespect my wife. I just try to take it out in between the lines. I don't care about anything at that point."

Marshall had to be restrained from going after Jenkins late in the second quarter. Marshall, though, repeatedly stressed that Jenkins later apologized when the Giants' defensive lineman learned that the Jets receiver is married to Michi Marshall.

"The cool thing is, he didn't know I was married, and we talked it through, and he said he didn't mean to do it," Marshall said. "He thought maybe I had four or five girls or something. [I'm] happily married, to one woman, my wife, Michi Marshall. And I will fight to the end for her."

Marshall made Jenkins and the Giants pay with his play, as he finished with 12 catches for 131 yards and an overtime-forcing touchdown with 27 seconds left in regulation to help lift the Jets to a 23-20 win over the Giants.

Jenkins was asked why it felt like there was more emotion on the field despite both teams downplaying a rivalry.

"Well it's December, you got two teams fighting for the right to continue to play into January," the good-natured Jenkins said. "We're both right there on the edge, and it's a game that both teams need to win."

Marshall was glad he could laugh and joke about nearly coming to blows with the 6-foot-2, 305-pound Jenkins afterward.