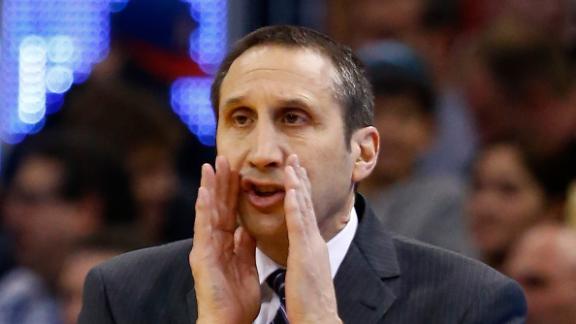 "That's a lot of -- I'm trying to find a nice word for it because I'm talking to the public -- well, that's a lot of nonsense and I think it's kind of cheap, to be honest with you. I really do."

Lue also interviewed for the Cavs' head-coaching vacancy in the summer after Mike Brown was fired for a second time. While Blatt got the gig, becoming the first head coach in NBA history with solely European coaching experience on his rsum, Lue was hired by Cavs owner Dan Gilbert as Blatt's lead assistant and lavished with a $1.4 million per season contract, making him the league's highest-paid assistant coach.

Blatt detailed the responsibilities that Lue, an 11-year NBA veteran who had served as an assistant coach on Doc Rivers' Boston Celtics and Los Angeles Clippers teams since 2009, performs for his staff.

"I wouldn't delineate it only to a game day," Blatt said. "He's the first assistant here and he has a very big role. He's of great assistance to me, both in terms of his experience in the league, in terms of his knowledge of the game and I lean on him and all the assistants very heavily. Quite honestly, I welcome what they bring to the table. I encourage it and I benefit from it."

The Cavs have two other assistant coaches with head-coaching experience -- Larry Drew and Jim Boylan.

Blatt also brought up an article that was published on SheridanHoops.com that included five YouTube videos shot by a fan at the Cavs' recent loss to the Phoenix Suns that painted Cleveland's bench as a disconnected group.

"You know in this day and age if you want to shoot a video from the sideline or from a camera on your phone, you can pretty much create anything you want," Blatt said. "You guys know it better than I, I'm not a social media expert, but you can create almost any image that you want if you want. Things are fine, things are great amongst our staff. In the locker room, things are great. We just need to get out there, win basketball games, get everybody back on the same page as we were a few weeks ago when we were rolling pretty good."

While the Cavs certainly have fallen on tough times, losing six in a row and nine out of 10 to fall to 19-20 and sixth in the Eastern Conference entering Thursday night, Blatt said he's been through the start of a season like this before and was able to turn it around for his team.