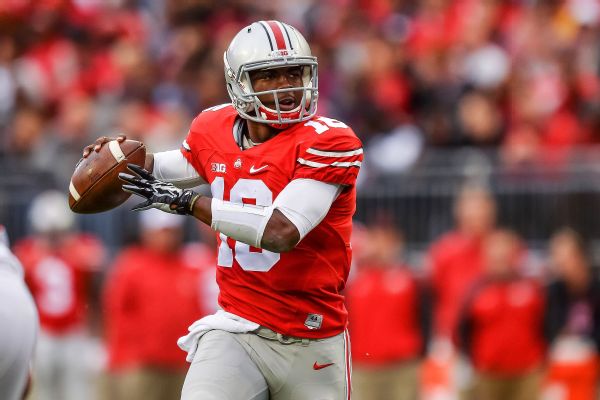 Washington stays at No. 5, as the top five went unchanged after all had decisive victories last weekend.

Western Michigan is 6-0 for the first time since 1941 and is in position to contend for a spot in a New Year's Six bowl. The Broncos already have beaten two Big Ten teams (Northwestern and Illinois).

This season has continued as a steady rise for the Broncos since coach P.J. Fleck -- who at 35 is the second-youngest head coach in the FBS -- took over in 2013 and went 1-11. WMU was 8-5 each of the past two seasons, reaching bowl games in consecutive seasons for the first time in school history.

Joining Western Michigan as newly ranked teams are No. 23 Auburn, which beat Mississippi State 38-14, and No. 25 Navy, which upset Houston 46-40 on Saturday.

Houston fell seven spots to No. 13.

Stanford, which lost 42-16 to Washington State, dropped out of the rankings for the first time since early in the 2015 season. Also falling out were North Carolina, which lost 34-3 at home to Virginia Tech, and Colorado, which lost 21-17 at USC.

Miami and Arkansas both dropped six spots, falling to No. 16 and No. 22, respectively.