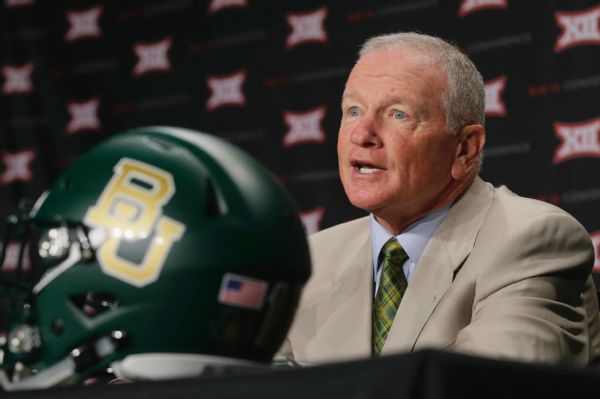 Baylor acting head coach Jim Grobe has disputed the university's account of how Jeremy Faulk was kicked off the football team in June, saying the defensive lineman had been suspended by the team but not dismissedafter he was accused of sexual assault.

Faulk, a junior college transfer who reportedly has won an appeal to be reinstated, has said he was ousted after he was questioned about a sexual assault that allegedly occurred on campus in April and about an incident that occurred when he was enrolled at Florida Atlantic.

The circumstances of Faulk's departure remained unclear Monday night, illustrating a level of dysfunction that continues to ruffle the Baylor football program and keep the school under the cloud of a sexual assault scandal that has dragged on for more than a year.

Last week, KWTX-TV in Waco, Texas, reported that Faulk won an appeal to have his scholarship reinstated in July. But because a Title IX investigation has remained open for four months, Faulk hasn't been allowed to re-enroll at Baylor and rejoin the football team.

Grobe's comments were met with widespread support from eight of the Bears' current assistant coaches, as well as several staff members and a handful of former players, who nearly simultaneously tweeted a link to the story containing his comments on Monday night, along with the hashtag #TRUTHDONTLIE.

Baylor executive associate athletics director Nick Joos told ESPN on Monday night that the university addressed the issue of the Baylor coaches tweeting about the case.

During his weekly news conference with reporters on Monday, Grobe said he made the decision to suspend Faulk after he was accused of sexual assault. According to KWTX, he later called the station to clarify his remarks and said he didn't make the decision to dismiss Faulk from the university and strip him of his scholarship.

"I think that's the way most coaches deal with problems if you've got kids that have issues. They may come back to the football team, but they may not temporarily be able to represent the football team, and that's not just Jeremy -- it's any kid on our football team," Grobe told reporters on Monday.

Faulk, who transferred to Baylor after playing at Garden City (Kansas) Community College, told ESPN on June 10 that he was dismissed from the Baylor team after he was questioned about a sexual assault that allegedly occurred on campus in April, and also about an incident that occurred when he was enrolled at Florida Atlantic.

Faulk, from Palatka, Florida, told Outside the Lines that police never questioned him about the April 21 incident and he wasn't arrested. Baylor police provided ESPN with a heavily redacted incident report.

On Friday, Baylor's Joos said in a statement that Faulk was dismissed from the school on June 3 "based upon violations of the university and athletic department Code of Conduct." Joos also said in the statement that Grobe and the interim athletics director made the decision to dismiss Faulk "and did not require other Executive Council members nor Title IX staff involvement."

Grobe, who has guided the No. 11 Bears to a 5-0 record going into Saturday's home game against Kansas, didn't respond to phone calls from ESPN.com.

Grobe, a former Wake Forest coach, was hired on May 30 to replace former Baylor coach Art Briles, who was fired three days earlier in the wake of the university's sexual assault scandal.

For the past several months, Baylor has been at the center of nationwide attention over its handling of sexual assault allegations and investigations, including several that involved athletes. After the Philadelphia law firm Pepper Hamilton issued a scathing summary of its findings from a monthslong investigation, Briles was fired, former university president and chancellor Kenneth Starr was demoted and later resigned, and athletics director Ian McCaw resigned.

Last week, Baylor Title IX coordinator Patty Crawford resigned and alleged that the university's leadership wouldn't allow her to fulfill her responsibilities and that the school continues to violate Title IX. Crawford, who was hired as Baylor's first full-time Title IX coordinator in 2014, also filed a complaint with the U.S. Department of Education's Office for Civil Rights about the way Baylor is handling Title IX complaints.

Faulk's dismissal from Baylor angered Jeff Sims, a former Florida Atlantic assistant and head coach at Garden City. He said Baylor officials wanted to rid themselves of Faulk even before it was proved if he committed sexual assault. Sims also alleged that Grobe told him during a phone call in June that the allegations would go away if Faulk left Waco.

"Grobe says to me, 'Listen, if he just leaves, he can go on, and we won't stop him from playing anywhere, and this investigation will stop,'" Sims told ESPN.

"To me, that's the whole reason they got in trouble -- either Jeremy's innocent, and they should go through the process, and he should get his scholarship back and play. Or he's guilty, and this girl should get some justice," Sims said.

The same morning Faulk received the email telling him his withdrawal from the university was final, he received another from the athletic department compliance office saying there "is not a Title IX report at Baylor" involving him. Faulk responded a few hours later by sending an email requesting a hearing and a chance to defend himself anyway. Only then did the Title IX office send him -- two hours later -- an email stating he'd been named as a respondent in a case and had been accused of violating the school's sexual discrimination, violence and harassment policy. The email provided no further details of an incident.

"No one's given me a reason why I've been released," Faulk told Outside the Lines. "If I just leave, it will look like I'm guilty, and I didn't do anything."

Outside The Lines reporter Paula Lavigne contributed to this report.
Related topics:
sportsespntodd patulskijeremy faulkbaylor bearsreinstatementcollege footballdismisseddefensive linemanjunior college transferathletics directorappealjim grobe
Copyright © 2022 ESPN Internet Ventures. All rights reserved.
TOP STORIES
51-year-old on the run as suspect in corporal's ambush killing
Sergeant was to walk daughter down aisle until his hit-and-run death
Drying out but staying cool this week
Texas among states suing Google over claim it's misleading consumers
Man accused of stabbing K-9 in The Heights now charged
'We knew something big exploded': ABC13 recalls moment of Watson blast
2 adults killed and 12-year-old hurt in crash with speeding tow truck
Show More
Dad charged and fired from job after racist tirade posted on TikTok
Bad Bunny announces stadium tour stop at Minute Maid Park
Here are your headliners set to perform for the BBQ Contest at NRG
5 tax changes that can boost your refund this year
Getting paid on Venmo or Cash App? New tax rule might apply to you
More TOP STORIES News