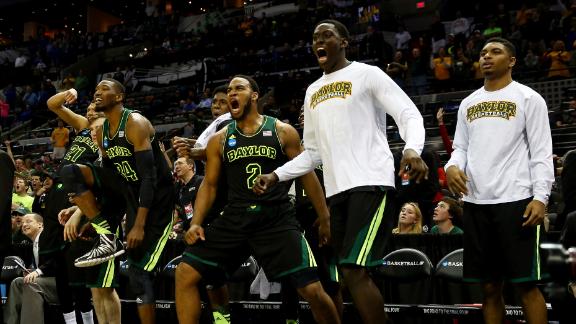 SAN ANTONIO -- Too big. Too strong. Too fast.

Baylor was too much of just about everything for Creighton and Doug McDermott to handle.

And because of it, the sixth-seeded Bears are rolling out of Texas toward California and the NCAA tournament Sweet 16 after an impressive 85-55 win Sunday night in the West Regional.

Isaiah Austin and Brady Heslip each scored 17 points and Baylor used suffocating defense to shut down McDermott, ending the career of one of college basketball's most prolific scorers.

"We did a good job making it tough on him," Bears coach Scott Drew said.

McDermott, who averaged 27 points this season, finished with 15 but had just three in the first half as Baylor built a 20-point lead. McDermott ranks fifth on the NCAA career scoring list with 3,150 points.

Baylor (26-11) had five players score in double figures and shot 64 percent in one of the dominant performances of the tournament.

The rest of the West bracket may want to pay attention to this one. A team that looked like a wreck six weeks ago with a 2-8 start in the Big 12 is brimming with confidence to match all that muscle in the lineup.

"We take pride in people hating on us, and we love proving people wrong," Austin said. "Everybody has bought into the one goal that we have in mind and that is winning a national championship."

Baylor plays No. 2 seed Wisconsin on Thursday in Anaheim. In Baylor's two previous trips to the Sweet 16, it fell one game short of the Final Four.

McDermott carried the Bluejays back to the round of 32 for the third year in a row, and had done it in spectacular style, leading the nation in scoring with a sublime shooting touch and uncanny knack to slither his way through defenders for layups and putback baskets.

McDermott spurned the chance to turn pro after last season, and this was the year the Bluejays and their senior-laden lineup were expected to drive Creighton farther into the NCAA tournament than any Bluejays team before them.

But Baylor's defense gave him nothing: neither space to shoot nor even chances for his teammates to pass him the ball.

And for all the talk about Creighton's maturity and bonding, Baylor made the Bluejays look small and slow.

"This is the worst we've played all season, and it just stinks that it's the last one. But that doesn't take away from all my memories here. It's tough to go out this way," McDermott said.

Baylor came out blazing from long range, knocking down five 3-pointers in the first 7 minutes. Kenny Chery made three and when Heslip, who was 0 for 6 in Friday's win over Nebraska, swished his first against Creighton, he mockingly shook the fingers on both hands as he loped back down the court.

"We were just expecting it to be a fight, to be honest," Heslip said.

McDermott, meanwhile, struggled to find any kind of space inside or out against Baylor's zone defense and badly misfired on his first attempt, a baseline shot that missed everything.

This rout was just beginning.

The Bears flexed their muscle early and often with a lineup built for the rigors of the Big 12. Austin is 7-foot-1 and he teamed with 6-10 forward Cory Jefferson in the frontcourt. When Creighton missed a shot, the typical result was three Bears under the basket with no Bluejays around.

Baylor's bench was just as intimidating. When reserve forward Rico Gathers pushed his 6-foot-8, 270-pound frame through the lane for a layup, two Creighton defenders were powerless to stop him.

By the time Baylor had built a 20-point halftime lead, McDermott had taken only three shots, made one and had two fouls.

"We knew we had them on their heels," Austin said. "We wanted to step on their throat."

Even when Creighton got a spark -- Ethan Wragge made two 3-pointers early in the second half -- Baylor simply matched basket for basket, denying any hopes of a rally.

Soon it was showtime as Baylor's lead kept growing. Jefferson slammed down an alley-oop dunk for a 58-34 lead with just more than 12 minutes to play. Gathers added another rim-rattler a few minutes later, his broad shoulders soaring to the basket to punctuate the night.

When McDermott left the game with 2:31 to play, he hugged his father, Creighton coach Greg McDermott, before retreating to the bench and burying his face in a towel.

"I'm not sure it was Baylor being that good or us being that bad," Greg McDermott said. "Over the course of the season you're going to have a few clunkers. We had one at the wrong time."