Astros turn to Justin Verlander with their season on the line 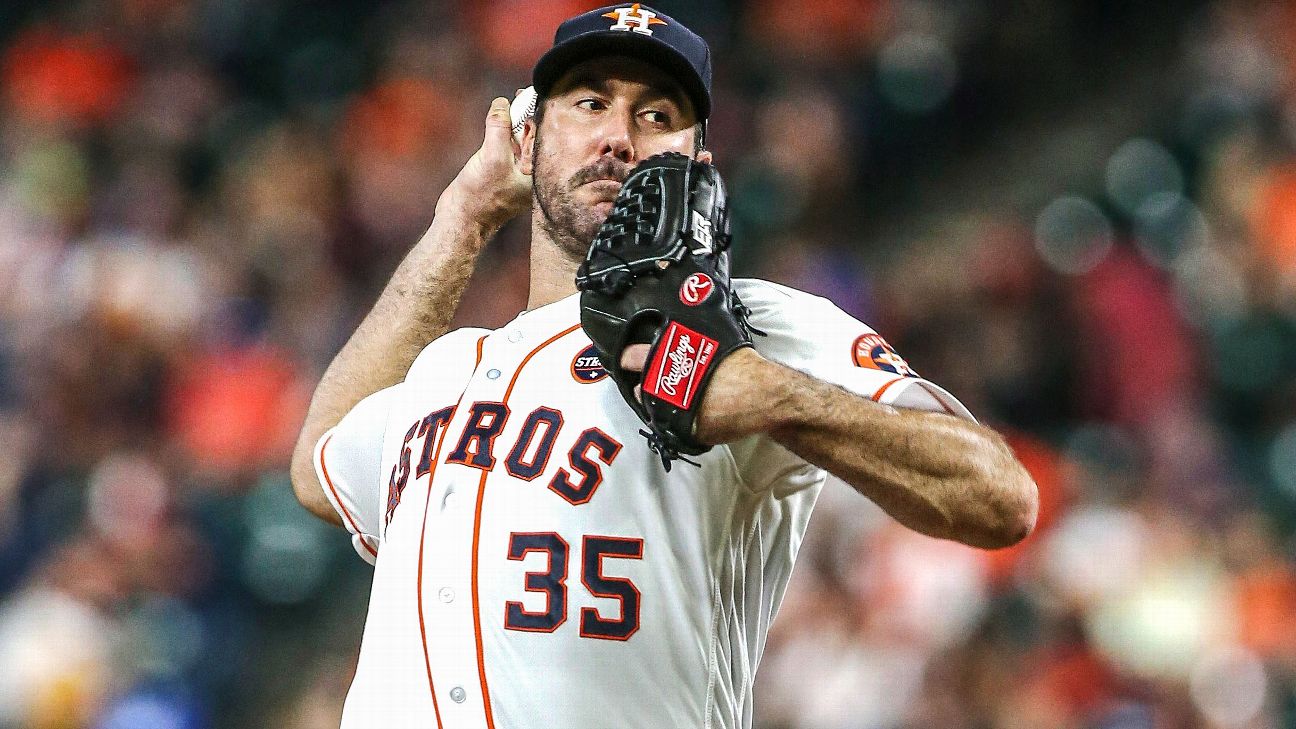 HOUSTON -- Wednesday was National Mulligan Day. And boy could the Houston Astros use a few do-overs.

First and foremost, the Astros probably would have liked a mulligan on Joe West's controversial fan interference call. The one that conjured up images of Jeffrey Maier circa 1996. The one that was upheld after a review that lasted more than three minutes. The one that robbed Jose Altuve of a two-run homer that would have tied the score. Even though it was only the bottom of the first inning, it felt like a monumental turning point in both the game (a contest that ended with the Red Sox winning by ... two runs) and the series.

But to pin Houston's 8-6 Game 4 loss in the American League Championship Series on that and that alone, to blame a suddenly daunting 3-1 series deficit on a single solitary call made four hours before the final resolution of a memorable marathon of a game, well that just wouldn't be fair or accurate.

"It's convenient to think about it that way," Astros manager A.J. Hinch said. "But there's a lot of game left. There was a lot of action in that game. No, I'm not going to go there. But it would have been nice to tie the game at that point. But that's not the difference."

Well, not that alone. Because there were plenty of other mulligan moments.

With two outs in the top of the sixth and Houston leading 5-4, Red Sox catcher Christian Vazquez laced one to the wall in right-center, just in front of the 373-foot sign. George Springer got a good jump and, sprinting over from his post in center field, looked like he was going to make an acrobatic grab up against the fence for the final out.

But he couldn't hold onto the ball, and Vazquez wound up with a double. Naturally, on the very next pitch from Houston reliever Josh James, Jackie Bradley Jr. went deep to put Boston back on top. According to Statcast, the double by Vazquez had a hit probability just above 50 percent (55, to be exact). In other words, it was essentially a coin flip.

If only Springer and the Astros had a mulligan.

In the top of the seventh, with one out and runners on first and second, Boston's Rafael Devers hit a grounder to the left side of second base. Shortstop Carlos Correa, who was positioned toward the middle, ranged to his left and scooped up the ball. Though he could have flipped it to second baseman Marwin Gonzalez, Correa opted to go the DIY route, stepping on the bag and then throwing to first for an inning-ending double play. Except that he never really stepped on the bag. Instead, he planted his foot an inch or two away.

"I had to rush to turn the double play and get out of the inning," Correa explained after the game. "I couldn't step on top of the bag because then I would have nothing behind my throw. So I was just trying to tap the bag. It was either that or just step on the bag and get one out. I felt like that was all I could do right there."

Whatever Correa did --or didn't do -- second base ump Mark Wegner saw it clear as day. No double play. No replay review. And, of course, no mulligan.

With runners on the corners, reliever Ryan Pressly proceeded to walk Steve Pearce, loading the bases. Then Lance McCullers -- who came on to replace Pressly -- walked Brock Holt to force in a critical insurance run and give Boston a 7-5 lead.

In the bottom of the eighth, with suddenly shaky Sox closer Craig Kimbrel on for a two-inning save, Astros speedster Tony Kemp led off with a rope down the right-field line that had double written all over it. Only nobody told Mookie Betts. The two-time Gold Glover raced over to the line and cut off the ball, then turned and fired a seed to second base to gun down Kemp.

Kimbrel proceeded to plunk the next batter, Alex Bregman, who immediately advanced to third on a Springer double. Although Bregman scored on an Altuve groundout to cut the lead to 8-6, it was hard not to imagine what that rally might have looked like had Kemp decided to play it safe and stop at first.

"I didn't love it," Hinch said postgame, a refreshing show of candor in a modern baseball landscape where throwing players under the bus is almost as uncommon as throwing a complete game. "Down by three, it's a tough gamble. And Mookie is one of the best right fielders in the game. Got a strong arm, and the play's right in front of him. So I think it was a mistake."

Even though it was National Mulligan Day, Kemp didn't get a do-over. Nor did Bregman, whose ninth-inning, bases-loaded liner to left looked like it might tie the score -- at a minimum -- but instead landed in the glove of diving left fielder Andrew Benintendi, ending the game and sucking the air right out of Minute Maid Park.

The good news for the Astros is that Thursday is another day, and although they don't get a do-over of Game 4, they do get a chance to play Game 5. They get the opportunity to whittle Boston's ALCS lead down to one game instead of two, a chance to send the series back to Boston for Game 6 and a potential Game 7.

Even better, Houston has the good fortune of sending Justin Verlander to the hill. In five career postseason starts in potential elimination games, the Astros ace is 4-1 with a 1.21 ERA and he has pitched an average of 7 innings, according to ESPN Stats & Information research. He also has pitched a combined 24 scoreless frames in his past three elimination starts. In other words, he's precisely the guy that Houston wants on the mound -- mulligan or no mulligan.

"When Verlander's on the mound," said Correa, "we feel like we're going to win that game." 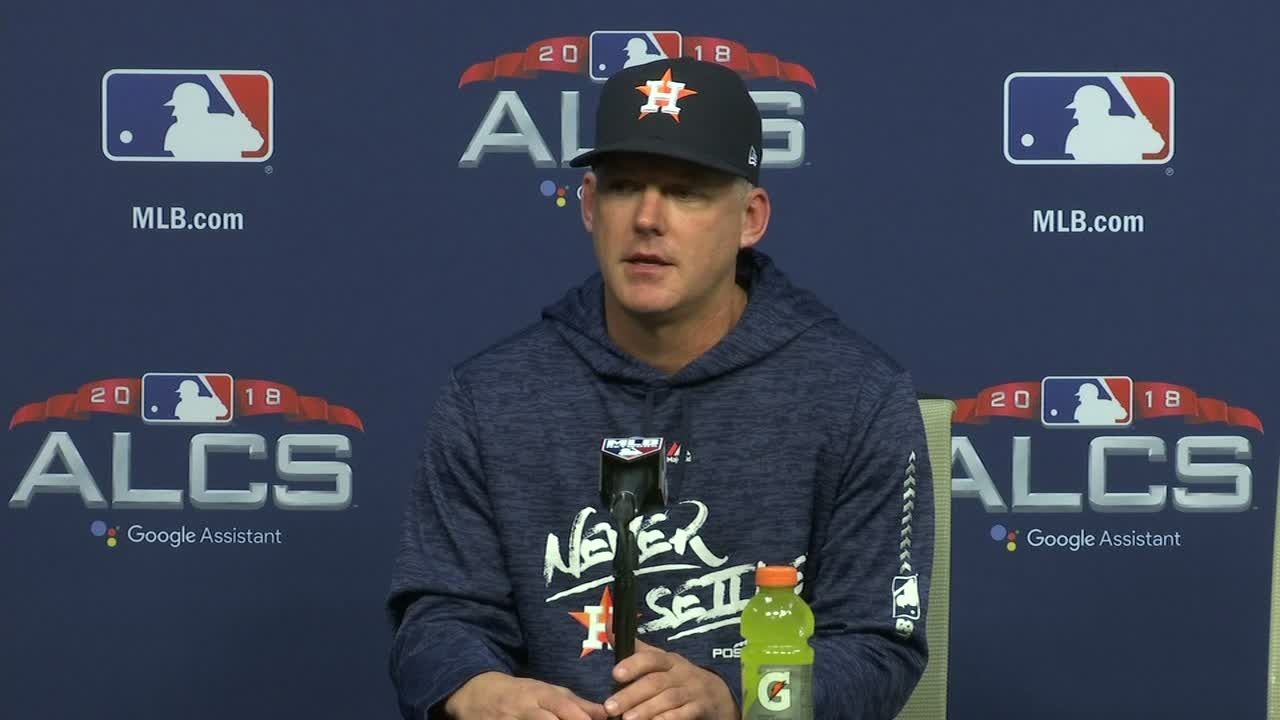