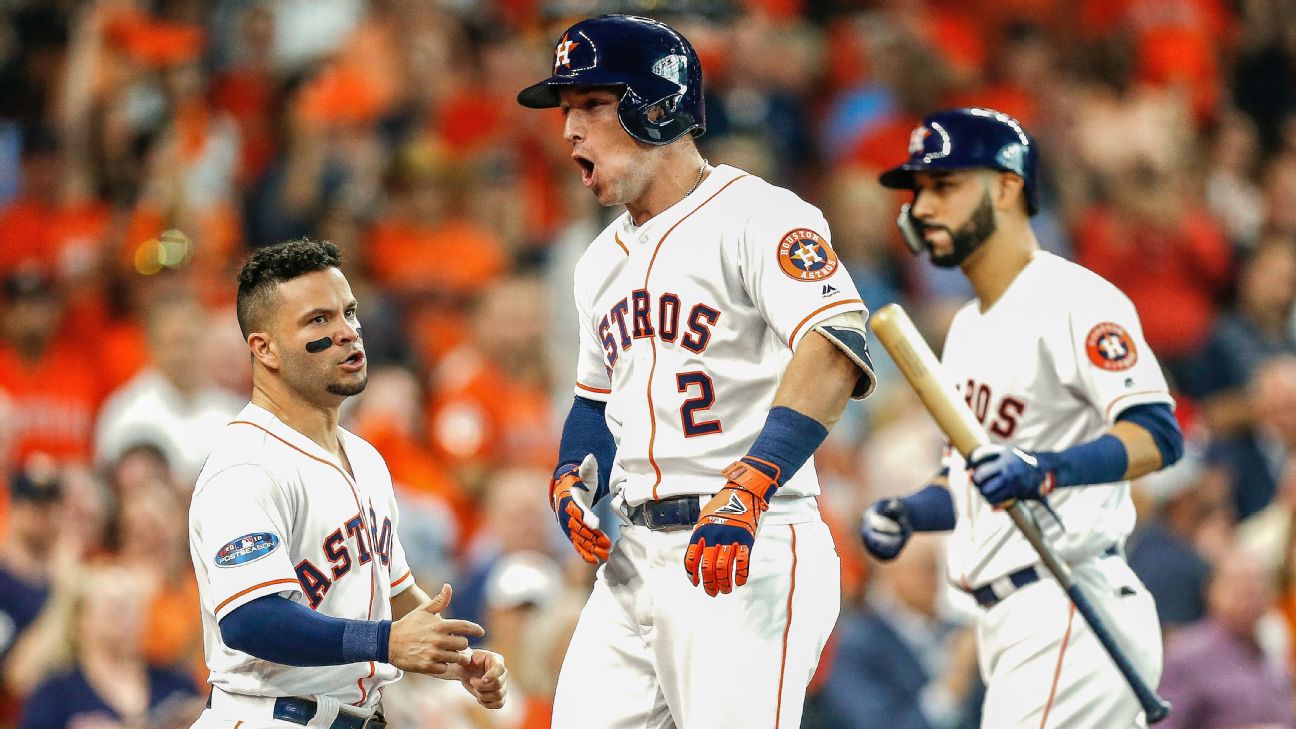 After all, 342 days had passed since the defending championHouston Astros last played a home postseason outing, when they prevailed over theLos Angeles Dodgersin Game 5 of a World Series slugfest. This time around, the Astros simply picked up right where they left off in leaning on timely contributions from Justin Verlander, Alex Bregman, George Springer and Jose Altuve to secure a 7-2 win over the Cleveland Indians in Friday's Game 1 of their American League Division Series.

"This is what it's all about," Bregman said. "Everybody in that clubhouse is living and dying on every pitch. It's fun to play these types of games. All the fans were unbelievable today. They were in every pitch, loud."

They certainly had reason.

With Verlander carrying a no-hitter into the sixth inning after retiring 13 consecutive batters through the fifth, Houston's bats had sprung to life in the bottom of the fourth, when Bregman crushed a home run to left field for the game's first hit. The ball jumped off Bregman's bat with an exit velocity of 107.1 mph, according to Statcast; that registers as the hardest home run hit by the third baseman in his career, including the postseason.

Josh Reddick added to that with the first of his two RBIs on a single to right field that scoredYuli Gurriel.

That quick sequence more or less silenced all of the pregame talk about the expected pitchers' duel between Verlander and Cleveland's Corey Kluber, who walked two batters and hit two more over the first four innings.

Kluber had hit two batters in a single game just three times in his career entering Friday's matchup. He only compounded matters by surrendering three additional home runs, one each to Springer, Altuve and Martin Maldonado--who tacked on an insurance bomb in the seventh on a 2-2 pitch.

The Springer and Altuve homers came on consecutive at-bats.

"I don't know if 'expected' is the right word," said Astros manager A.J. Hinch, when asked whether he anticipated such an offensive explosion against a strong ace such as Kluber. "I'm proud of our guys. It's a good group of pitchers we faced today. Obviously, it's got to continue for the rest of the series, but we kind of expect our guys to put up really good at-bats, yeah.

"The fourth inning was a really tough inning," Indians manager Terry Francona said. "I think they made him throw 33, 35 pitches. Just seemed like with his two-seamer, when he left it up, they made him pay."

Perhaps Kluber can blame rapper J. Cole for the rough outing as Altuve and Springer each tied the Astros record for career postseason home runs (eight). As Bregman tells it, "some of the guys were" repeating a lyric to the J. Cole song "Fire Squad" in which the line is uttered: "History repeats itself, and that's just how it goes."

"And then all of a sudden, Altuve homers and Springer homers," Bregman said. "It felt like last year when we had the ALDS at home; just trying to get a good pitch to hit. Got one over the middle. Kluber's tough, man. That whole pitching staff over there is very good. So, just fortunate enough to get a good swing on it."

As for Verlander, the ace put together the second-longest no-hit bid of his postseason career, before finally surrendering a hit in the sixth inning off Yan Gomes, who earlier in the day tested the hurler with a 10-pitch at-bat. As a member of the Astros, Verlander had never faced the Indians. But on four occasions in 2017 with theDetroit Tigers, Verlander was 1-3 against the Indians, with an 8.14 ERA.

Verlander pitched 5 innings, throwing 70 strikes on 102 pitches on Friday, while his Cleveland counterpart gave up six hits with two walks and two strikeouts in 4 innings before giving way to Adam Cimber.

"We have a lot of respect for him; we all know how good he is," Altuve said of Kluber. "We're all aware of that. Sometimes when you're facing a guy like him, the only thing you can control is to swing the bat. That was our mindset. We were pretty aggressive, swinging since the first pitch, and good things happened today. We started the same way last year, you know, we won the first one. It creates a little bit of momentum.

"Today's game was awesome. Of course, the MVP [Bregman] had the first homer the team had, Josh Reddick with the big hit, Springer with the big homer, Maldonado, everybody did something to help the team win today."

The hope in the Houston clubhouse is it continues, but perhaps just as important is that the Astros continue to have fun doing it.

"Our clubhouse is not like any other clubhouse I've ever seen," Springer explained. "It's fun to come to the park. It's fun to play with each other. All 25-plus guys in there are cheering for the other guy to succeed. For guys who step in or get traded over here, get called up, I think that they get to see that. Having guys like Brian McCann, Jose Altuve to at least set the tone of, 'You know what, go out, have fun, enjoy the day. Because at the end of the day, we're in the big leagues and we're playing in front of a great crowd, a great city. So go out and kind of enjoy it.'

"I think for us it's all about having fun, and I think in the clubhouse is now starting to spread out onto the field."

The teams face off again on Saturday at 3:37 p.m. ET in Houston with Gerrit Cole on the hill for the Astros.

Astros' 4 solo HRs power Game 1 win
Alex Bregman, George Springer, José Altuve and Martin Maldonado all go yard in the Astros' 7-2 win over the Indians in Game 1 of the ALDS. 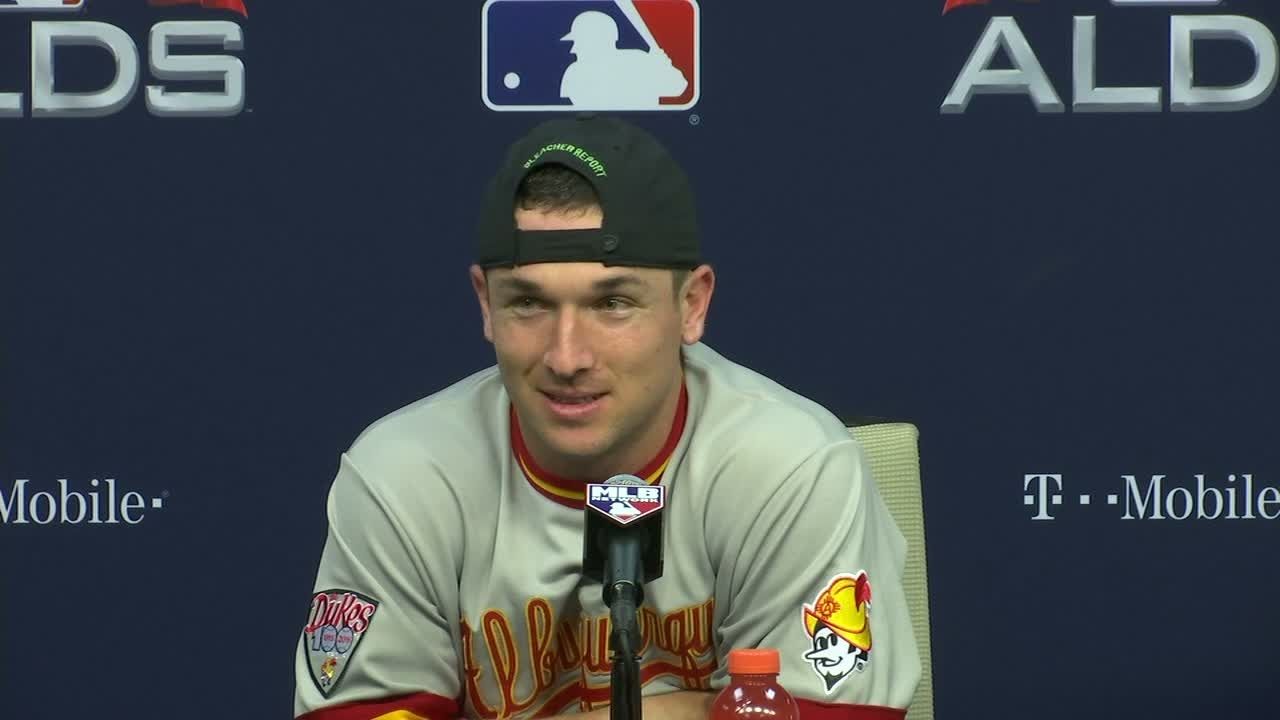 Bregman: 'This is what it's all about'
Alex Bregman says the beauty of playing for the Houston Astros is every player desires to have the bat in their hands with the game on the line.
Report a correction or typo
Related topics:
sportsespncleveland indianspostseasonmlbchampsfirst roundhouston astrosreigning championsworld seriesleague division seriescentralaldswestldsoctoberamerican leagueplayoffs
Copyright © 2022 ESPN Internet Ventures. All rights reserved.
TOP STORIES
Body found at Memorial-area home tied to K-9 stabbing suspect
Drying out, but staying cool this week
Increased reward for tips to solve 2019 Tomball garage sale murder
Mom shares story of son's 'scary' battle with COVID complications
3-year-old injured in deadly chase with deputy on life support
Klein HS becomes first Space Force JROTC in Texas today
H-E-B's Scott McClelland retirement and what's next
Show More
Cause of death revealed for 23-year-old woman found dead after date
Sergeant was to walk daughter down aisle until his hit-and-run death
Omicron-specific COVID-19 vaccine starts clinical trials
COVID-19 vaccines do not affect fertility, study finds
51-year-old suspect in corporal's ambush killing on the run
More TOP STORIES News