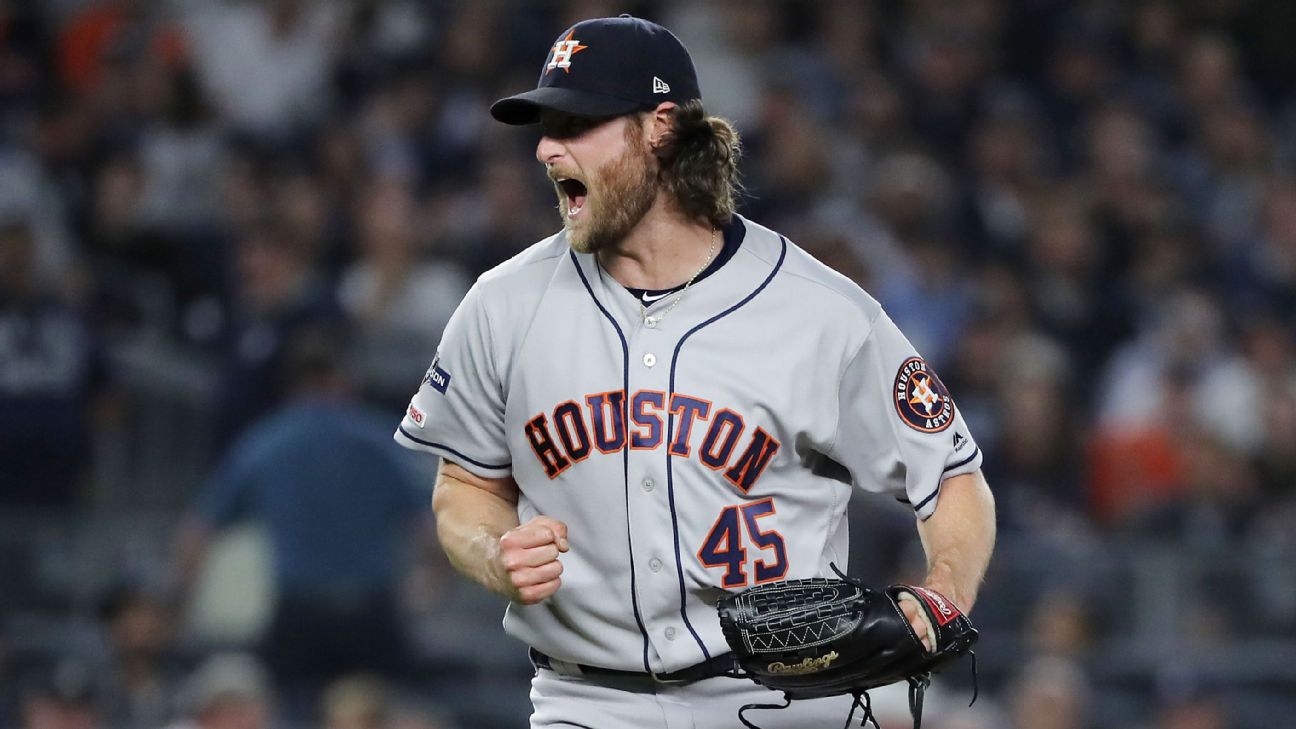 NEW YORK -- Houston Astros ace Gerrit Cole did not have his best stuff against the potent New York Yankees offense in Game 3 of the American League Championship Series on Tuesday. He put up nothing but zeros anyway.

Cole went seven often-laborious innings in Houston's 4-1 win, striking out seven and walking a career-high-tying five batters. But he held New York to just four hits over his seven scoreless frames, extending his streak of starts without a loss to 25, dating back to May 22. That's the fifth-longest streak without a loss in big league history. But this one wasn't easy.

"Intense," Cole said. "Had to battle tonight. I thought their offense did an excellent job working some counts. Fell behind a few guys in a few of the early innings and put us in a tough position [where] we needed to make some pitches, and fortunately we did. Got away with a few mistakes, obviously."

The Astros took a 2-1 lead in the best-of-seven series and reclaimed the home-field advantage they lost when the Yankees won Game 1 7-0 at Minute Maid Park. Cole improved to 3-0 in the postseason with just one run allowed in 22 innings -- a 0.40 ERA. His 32 strikeouts during the playoffs are the third most for a pitcher in his first three outings of a postseason, behind Bob Gibson (35, 1968) and Cliff Lee (34, 2010).

"I think he's the best pitcher in baseball right now," Astros manager AJ Hinch said. Then remembering Cole's co-ace in the Astros rotation -- Justin Verlander -- Hinch added, "His competition is right next to him in the clubhouse. They're certainly a good pair.

"Obviously, I'm biased to my guys. But Gerrit is locked in. And to see him do it on the big stage in a playoff game with the magnitude of this game, it was pretty awesome."

And yet Cole struggled with his command and pitch count for much of the outing. All five of his walks were issued with two outs. The Yankees got multiple runners on base against him in four of his first five innings, stranding nine runners in the process. The five free passes matched the career high he set on June 18, 2018, against the Tampa Bay Rays.

Cole ended up throwing 112 pitches, tied for his third-highest total this season, before turning the ball over to the Houston bullpen.

"I actually think the beginning of the game he had a hard time finding his stuff and finding his tempo, his rhythm," Hinch said. "He was still getting through his outing, made some really big pitches, had some pressure on him. Then once he found his curveball, it was pretty lights out."

But the closest the Yankees game to finally putting up some runs against Cole came in the bottom of the fifth. With two on and two out, Gregorius lifted a high-arching fly ball to right field that backed Astros outfielder Josh Reddick to the fence. But the ball settled into Reddick's glove, keeping the Yankees scoreless.

"I initially wasn't that worried, and then I started to get a little worried when Reddick was kind of drifting back," Cole said. "But he pulled up and the blood flow just kind of relaxed a little bit. Like I said, thank God he didn't pull it more."

Cole's catcher, Martin Maldonado, was asked about the righty's stuff and command and rated the stuff "a 10" and said that despite the walks, the Yankees deserve some credit, too.

"That was a pretty good lineup," Maldonado said. "It's not like we're facing a s--- lineup. They take some good at-bats, put some at-bats together, foul off a lot of pitches. That's what they did the whole game, from the first at-bat to LeMahieu to the last at-bat.

Cole, 29, went 20-5 with a 2.50 ERA and 326 strikeouts during the regular season, building a strong case for the AL Cy Young Award, with Verlander likely his main competition for the honor. His record during his loss-free streak improved to 19-0.

For all the gaudy numbers, it's Cole's resolve and resourcefulness that most impress his teammates.

"That's one of his best qualities," Houston third baseman Alex Bregman said. "When he doesn't have a pitch or have command or doesn't have something else, he figures out how to get the job down. We all can learn a lot from that."

The Yankees led the American League with 943 runs during the regular season and entered the game having scored 30 runs in their five postseason games. And they still didn't get to a pitcher having an ace's version of an off night. It's a harrowing prospect for the Bronx Bombers, knowing that if the series goes to six or seven games, they'll have to face Cole again, only with the season on the line.

"It goes without saying that anytime you can target another day for him to pitch, it feels pretty good," Hinch said, before reminding everyone that the series is far from over. "I think there's a lot of baseball left to play before that factors in."
Report a correction or typo
Related topics:
sportsespnmlbnew york yankeeshouston astrosgerrit cole
Copyright © 2021 ESPN Internet Ventures. All rights reserved.
More Videos
From CNN Newsource affiliates
TOP STORIES