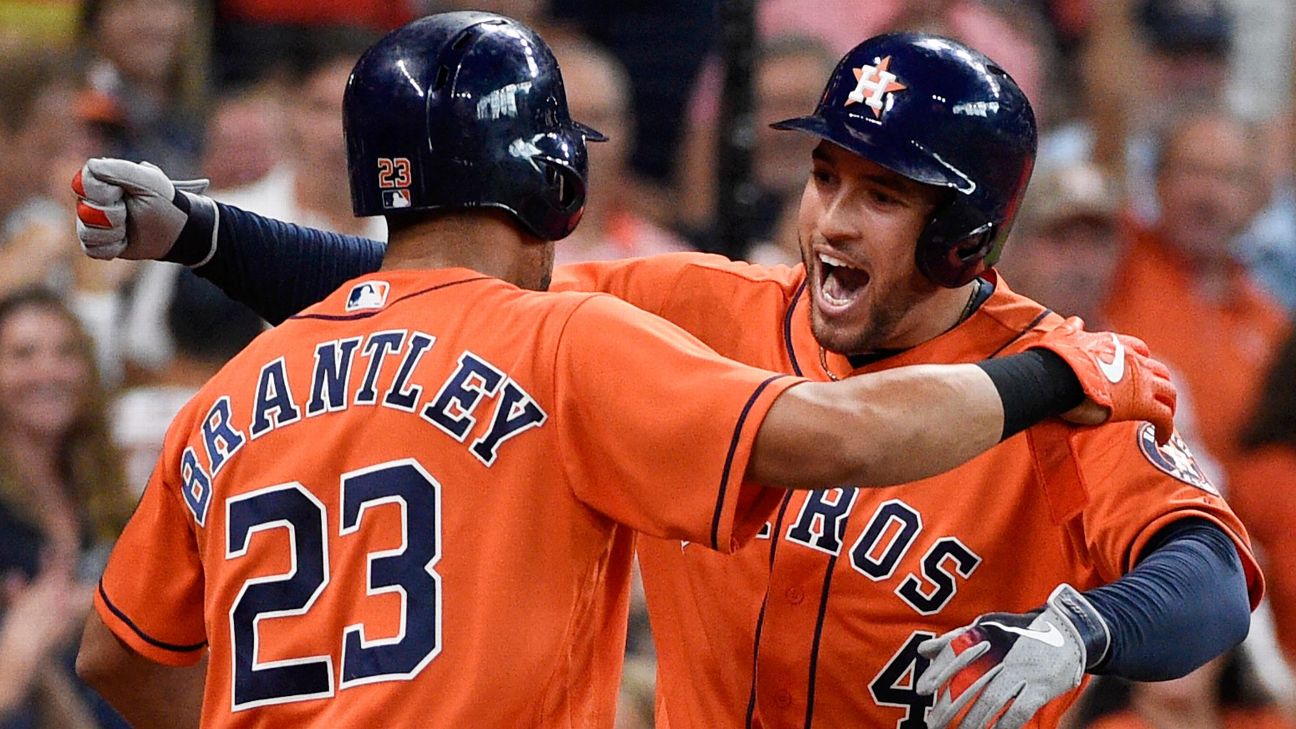 And amid the celebration of clinching their third straight American League West title, they were already thinking ahead to what they might achieve in October.

"You can't ever take the first goal for granted," Verlander said. "I know everybody says we're going to win the World Series, but you can't do that without this first. So, step one complete. Now we have the divisional round coming up and we'll ... prepare for that and try to win 11 games."

A crowd at Minute Maid Park that was cheering from Verlander's first pitch got even louder as Springer homered three times in the first four innings. The Astros kept breaking away and improved to 102-54, a half-game ahead of the New York Yankees for the best record in the majors.

After the final out, the Astros held a bouncing group hug in the middle of the diamond and posed for a team picture. It hasn't been determined who they will face in the playoffs as they try for their second World Series championship in three years.

Manager AJ Hinch spoke to the team in the clubhouse as the players broke out the bubbly and began a spraying celebration.

"I don't ever want to disrespect the things we've already accomplished, but when you're in the moment everything feels like it's the best of all time," Hinch said. "We've done a lot of good things around here over the last five years that I've been here. Every accomplishment seems to be building and building to being better. I like hanging flags; flags for divisions matter, flags for the World Series matter, and I want our guys to appreciate that."

Springer, the MVP of the 2017 World Series, had two chances to tie the big league record for home runs in a game. He popped up with the bases loaded in the fifth and grounded out in the seventh.

Verlander (20-6) yielded six hits and two runs in five innings to reach 20 wins for the second time in his career and the first since winning the AL MVP and Cy Young Award in 2011, when he went 24-5 for Detroit. This year's AL Cy Young front-runner struck out five to leave him six strikeouts shy of becoming the 18th pitcher in MLB history to reach 3,000.

The 36-year-old righty has fanned 288 this season, second most in his career and second in the majors behind teammate Gerrit Cole.

Verlander, who leads the AL with a 2.53 ERA, is the first Astros pitcher to win 20 games since Dallas Keuchel went 20-8 during his Cy Young campaign in 2015.

It's the second time Verlander has started a game in which the Astros clinched the division after he did it soon after he was acquired from Detroit in 2017.

"The last time I clinched the division for the Houston Astros we went on to do some pretty special things that year," he said. "Glad to be out there. These moments as an organization are so special. I'm just so happy to be a part of it."

Springer homered in his first three at-bats to help Houston take a 4-2 lead in the fourth inning. The Astros added six runs in the fifth, highlighted by a two-run homer from Alex Bregman to make it 10-2.

"The first at-bat was huge just because we're all waiting to get the lead so we can feel like we're going to clinch," Hinch said. "George does it within the first couple of pitches. He followed it up with a couple more homers. ... Our vibe was really good today. We wanted to celebrate today."

The Astros added six runs in a fifth, highlighted by a two-run homer from Alex Bregman to make it 10-2.

Springer, who has a career-best 38 home runs this season, got to work immediately, sending Jose Rodriguez's first pitch into left-center field for his franchise-record 12th leadoff homer this season. That left him one shy of the MLB record for leadoff homers in a season, set by Alfonso Soriano with the Yankees in 2003.

Jared Walsh and Michael Hermosillo hit back-to-back triples with two outs in the second to tie it up.

Los Angeles manager Brad Ausmus was asked if seeing the Astros celebrate on Sunday could provide motivation to his team.

"You hope for the younger guys," he said. "Older guys probably just look the other way. ... It's a lot more fun to be on that side."

Aledmys Diaz singled with no outs in the second and Springer connected off Rodriguez (0-1) again with two outs to put the Astros up 3-1.

There were two outs in the fourth when Springer sent a fastball from Jose Suarez into the seats in left field to make it 4-2.

The record of four homers has been done 18 times, mostly recently by J.D. Martinez for Arizona in 2017. This was the 14th time in a regular-season game in franchise history that an Astros player has hit three homers and the second time this season after rookie Yordan Alvarez also did it. 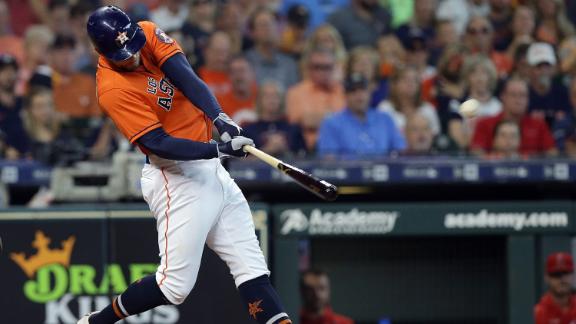 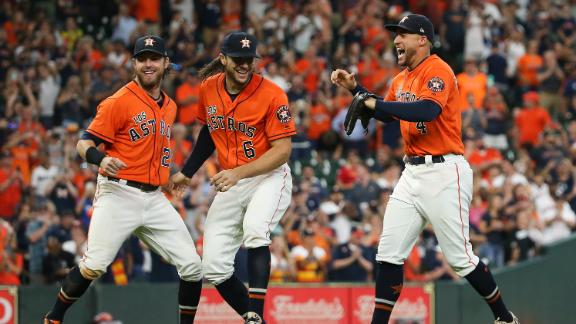