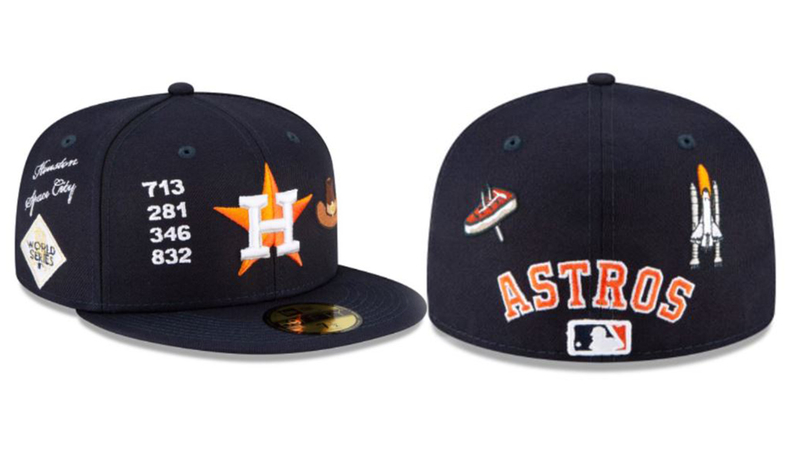 Hours after releasing a new line of MLB-affiliated "Local Market" hats on Tuesday, a company has pulled the caps from its website after backlash from fans.

New Era is the official cap supplier to MLB. The line featured a combination of team logos, local area codes, landmarks, World Series logos and other local tie-ins scattered over the hats. Social media reacted with mockery, and New Era later removed the collection from its site. New Era has not yet responded to a request for comment from ESPN.

The Houston Astros caps featured the four area codes for the area on the front along with a cowboy hat next to the iconic orange star "H" logo. On the back, the hats included an embroidered space shuttle and a steak.

"Ah thank you New Era! nothing says Houston like a steak and a space shuttle," one fan tweeted. "That is all we have, nothing else."

Ah thank you New Era! nothing says Houston like a steak and a space shuttle. That is all we have, nothing else. pic.twitter.com/5aUBQvaaJU

The New York Yankees cap, featured five area codes, the Statue of Liberty, an apple, a slice of pizza, a boom box on the rear above a "NEW YORK" stencil, along with the words "New York The Empire State" in cursive script above a World Series logo.

The Los Angeles Dodgers cap displayed nine area codes, plus a pair of palm trees on the front. The California state bear made an appearance on the side of the hat, as did a taco on the back.

The Atlanta Braves cap had what appeared to be a UFO on the front. The back of the Orioles hat included a silhouette of Baltimore's Edgar Allan Poe. The Seattle Mariners cap featured a cup of coffee.

The Cleveland Indians edition included a pierogi on the back, while the Philadelphia Phillies and Washington Nationals caps both featured an identical "1776" logo.

The Kansas City Royals version highlighted four area codes -- none of which are in Missouri, where the Royals actually play their games. The team's social media account appeared to have some fun with the omission, changing its official Twitter bio to read: "Located in Kansas City, Mo., we love Kansas area codes, saxophones, the flag of Kansas City, pigs, Missouri and the 1985 World Series."