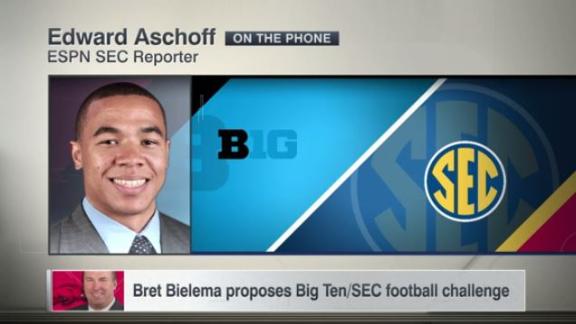 When it comes to future scheduling in college football, Arkansascoach Bret Bielema has a pretty interesting idea that could potentially satisfy the strength-of-schedule parameters for the College Football Playoff Committee.

Bielema, who is in his third year at Arkansas after spending eight seasons as Wisconsin's head coach, proposed the idea of a Big Ten vs. SEC Challenge, similar to what college basketball does now with the Big 12/SEC Challenge. Bielema's concept would consist of ranking all 14 teams in both conferences during the preseason and matching them with their respective nonconference counterpart for a game that season.

"Let the best of the best play each other, and maybe the lower ones play each other week in and week out," Bielema said on Wednesday's SEC coaches teleconference. "Just reserve a week every year, it would be kind of a fun thing. People would get into that now. I've been in both leagues, and I have the utmost respect for both. It would be something kind of fun if you could just reserve that, and that might eliminate the whole need for an FCS [team]. Then you schedule three other opponents that are FBS and go."

It's a relatively quiet week in the SEC, with No. 2 Alabama facing FCS opponent Charleston Southern and South Carolina hosting The Citadel. Four other teams -- Auburn, No. 8 Florida, Georgia and Kentucky -- all play non-Power 5 opponents.

With strength of schedule becoming more important during the playoff age, Bielema thinks organizing games like ones he proposed would only benefit the schools and the sport itself, especially when it comes to strength of the schedule.

Bielema added that this wouldn't have to be limited to the SEC and Big Ten, which meet regularly during bowl season. To Bielema, a uniform scheduling policy throughout the Power 5 would be ideal, and a series of matchups like this would be attractive.

"You have to think outside the box," Bielema said. "You really do see it come into effect [with the playoff rankings], and people are talking about it week in and week out. As coaches, we can't really get into it too much during the season, but people talk about all the time, and it's on TV and it's on radio, it's what's made our sport at an unprecedented high. I think if you think outside the box a little bit, even like what I just said, or maybe with another conference you could maybe find some constructive ways to do away [with FCS opponents] by even making it a little more balanced. To me, that's a fun way to look at it."

Texas A&Mcoach Kevin Sumlin said that having a similar scheduling structure could help eliminate the issue of teams having "bad losses" that affect their playoff rsums.

"If there's interconference play," Sumlin said, "you don't run into that situation."

Kentuckycoach Mark Stoops said he would "be open to playing some Big Ten teams" during the regular season but wondered if it was possible to get an entire conference on the same page with a proposal like that.

The idea of actually cutting ties with FCS programs was met with mixed emotions from SEC coaches. Some FCS schools' budgets rely on playing FBS programs, especially bigger Power 5 programs. While Alabamacoach Nick Saban has long called for Power 5 schools to play only one another, Georgiacoach Mark Richt, who works with FCS representatives as one of the board of trustees members with the American Football Coaches Association, said taking FCS schools off Power 5 schedules would "really hurt college football."

Richt proposed his own idea for scheduling, suggesting that Power 5 schools' strength of schedule should be ranked by their top 11 games, which would allow them to play an FCS opponent -- if they chose -- without being penalized.

"I say that because these FCS schools need to play these games, they need these paydays to continue their programs, as they exist today," Richt said. "Just imagine all the young men across America who wouldn't be able to play football and have a scholarship and have it paid for if it wasn't for all of these [FCS] schools.

Ole Misscoach Hugh Freeze, who previously coached at NAIA-level Lambuth University, agrees with Richt and believes the financial loss for FCS schools who don't play FBS schools can be detrimental to the programs and student-athletes.

"People who take the other side of it, I'm not sure what their argument is, but I know this: Those universities, in my opinion, there is no better educational room than the football field for these young men," Freeze said.

The Big Ten has already decided to stop playing games against FCS opponents, but there hasn't been much public discussion of that in the SEC. Beginning in 2016, the SEC will require its schools to play at least one nonconference Power 5 team -- which also includes FBS independents Army, BYU and Notre Dame -- each season.