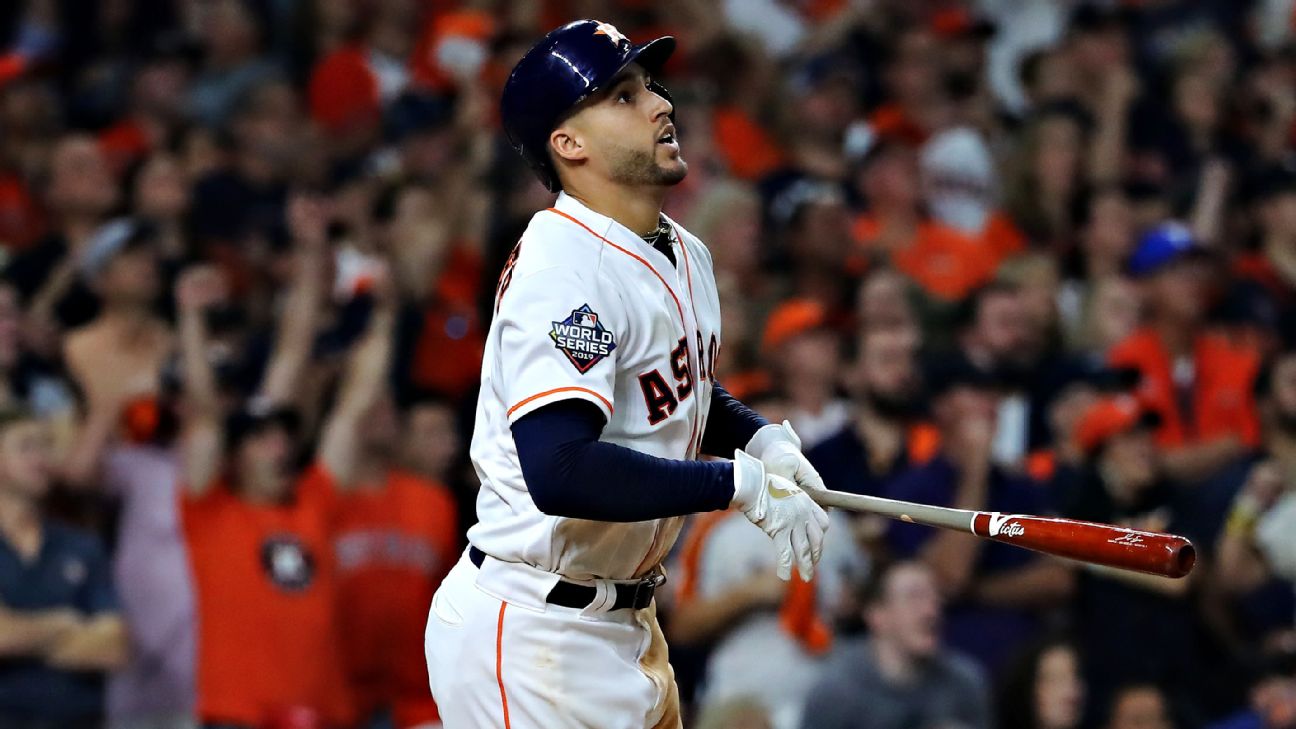 ESPN
By David Schoenfield
HOUSTON -- George Springer set a record in Game 1 with a home run in his fifth consecutive World Series game, but in the wake of the Houston Astros' 5-4 loss to the Washington Nationals, his failure to sprint out of the batter's box in the eighth inning became a hot topic.

With the Astros down 5-3 and Kyle Tucker on second base with one out, Springer launched a long fly ball into the right-center-field corner. Springer initially watched the ball and then hopped six or seven times on his way down the first-base line. He didn't run hard until he reached first base.

Nationals right fielder Adam Eaton made a leaping attempt at the ball, but it bounced off the heel of his glove and was retrieved by center fielder Victor Robles.

Tucker, who went back to second base to tag up, scored on the play, but Springer had a double instead of a potential triple. The next batter, Jose Altuve, flew out to right field, and Springer might have scored if he had been on third base. Instead, he was left stranded when Michael Brantley then lined out to left field.

In the initial aftermath of the game, Springer said he couldn't have made third base on the play even if he had run hard.

"I was watching [Eaton] the whole time," Springer said. "That's one of those things where I don't want to necessarily run as fast as I can because for some reason, if [Tucker] tags or whatever the case and I run by him, it's not good. So I was just kind of watching the outfielder."

He added that he wasn't kicking himself for not making it to third.

"I can't go to third right there because the guy on second had gone back to tag," he said. "If I had gone to third, I'm out."

Before Game 2, however, Astros manager AJ Hinch said Springer called him later to talk about the play, surprised that it had become a focal point of discussion and wanting Hinch's reaction.

"I felt like it was an honest mistake," Hinch said, adding that he wasn't going to dwell on it.

"I know how hard he plays," Hinch said of Springer. "I know he leaves it all out on the field. I talked to him late last night on the phone. He called me. He initiated the conversation. We followed up today with a personal meeting and walked through the different scenarios. I'm not sure if the play ends any differently, but everybody understands the look when it's a late entry into a play like that."

Still, Hinch admitted that it wasn't the best of baserunning plays.

"I think George got caught up in the moment of the play, in the anxiousness to see if the ball was leaving," he said. "It wasn't an egregious showmanship kind of pimp job, as they call it. It was a delay in reading the play correctly to where once he started running, he ran into Tucker, who was coming back to tag up because Eaton looked like he was camped underneath the ball." 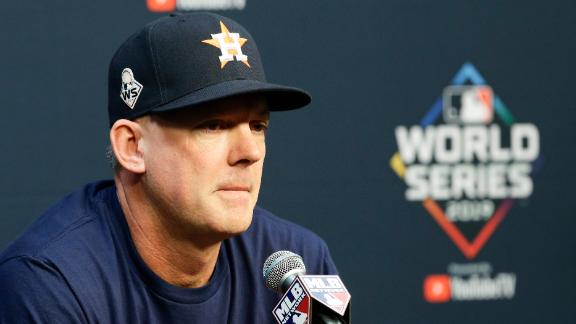 Hinch: Springer got caught up in moment on 8th inning double
AJ Hinch explains George Springer simply got caught up in the moment as he didn't sprint out of the box on his hit in the eighth inning.
Report a correction or typo
Related topics:
sportsespnmlbgeorge springerhouston astroswashington nationals
Copyright © 2020 ESPN Internet Ventures. All rights reserved.
More Videos
From CNN Newsource affiliates
TOP STORIES