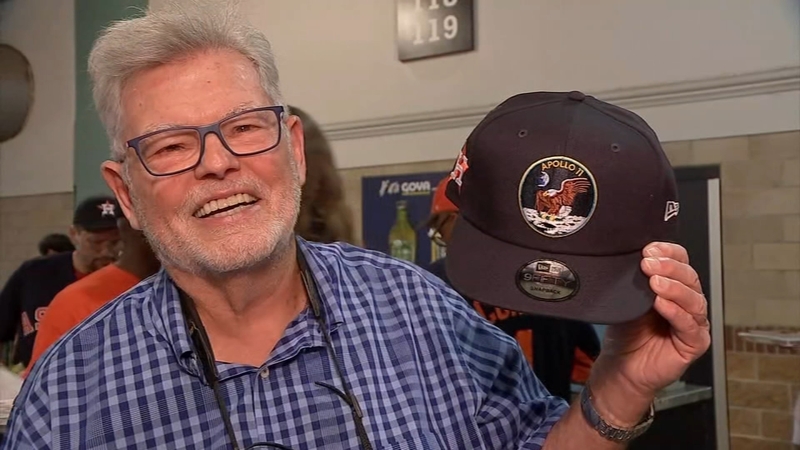 HOUSTON, Texas (KTRK) -- Apollo 11 night at Minute Maid Park was out of this world.

From cool space samples to a replica statue of Neil Armstrong's 1969 spacesuit from the Apollo 11 mission, it was a night to remember.

The Astros felt the luck of the Apollo mission at the game as 11's were everywhere.

The team scored their 11th run on the 11th hit of the game by the 11th Astros player to hit in the inning.

But what everyone wanted to get their hands on was all the cool merchandise from Monday night's theme.

"We knew we needed to get the bobbleheads," said Elizabeth Carlson.

Carlson and her husband Ken dressed up all the way wearing space hats. They were lucky enough to get the Orbit "moon landing" bobblehead and a shirt but they missed out on the hat.

"They sold out quickly," Carlson said.

But for Sean Fitzmaurice, sold-out, was not an option.

He somehow managed to snag a hat for his father for a special reason.

"He made my day," said Mr. Fitzmaurice.

That's because 83-year-old Bob Fitzmaurice worked for NASA for 14 years. He was able to connect the astronauts with children in schools.

"We would put (the astronauts) on television and beam them out to the school and it was 2-way audio and 2-way video," he said.

For his hard work, he received NASA's Silver Snoopy award.

"I remember when I was younger, going to NASA to see him work being introduced to a bunch of astronauts," said his son.