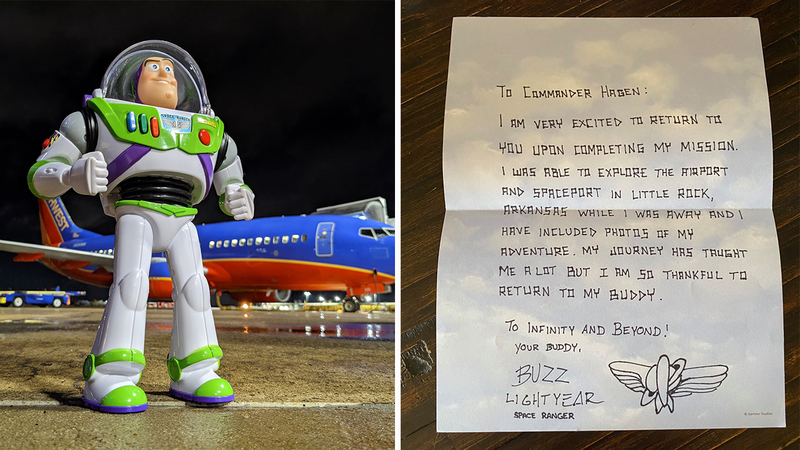 DALLAS, Texas (KTRK) -- The generosity of this act was infinity and beyond!

A young boy was reunited with his favorite toy thanks to the kindness of a Southwest Airlines agent.

Little Hagen and his family landed at Dallas Love Field Airport and had already left in a rental car before realizing that Hagen's Buzz Lightyear toy was missing.

Hagen had left Buzz behind on a Southwest plane.

According to a Facebook post from Southwest Airlines, by the time Hagen and his family noticed, the plane was already on its way to its next destination in Little Rock, Arkansas.

When the plane arrived, a Southwest ramp agent named Jason noticed the toy all alone onboard. He made it his mission to get Buzz home.

According to Southwest, Jason noticed the name "Hagen" on the bottom of Buzz Lightyear's foot.

Thanks to the help of a coworker, Jason was able to look up the plane's passengers from that day and find Hagen.
A few days later, Hagen received a special hand-decorated box in the mail. There was a letter inside describing Buzz's mission at Southwest Airlines, with pictures of his adventures.

"My journey has taught me a lot but I am thankful to return to my buddy!" the letter reads in part.

"There's definitely not enough good in this world, and for someone to take the time out of their day to do that for strangers means the world for us," Ashley said.

Southwest even posted a video of Hagen's reaction to the package in the comments.

Travel changes are on the way after President Joe Biden released his COVID-19 executive actions.

Only trained dogs would be considered service animals, according to these new rules.