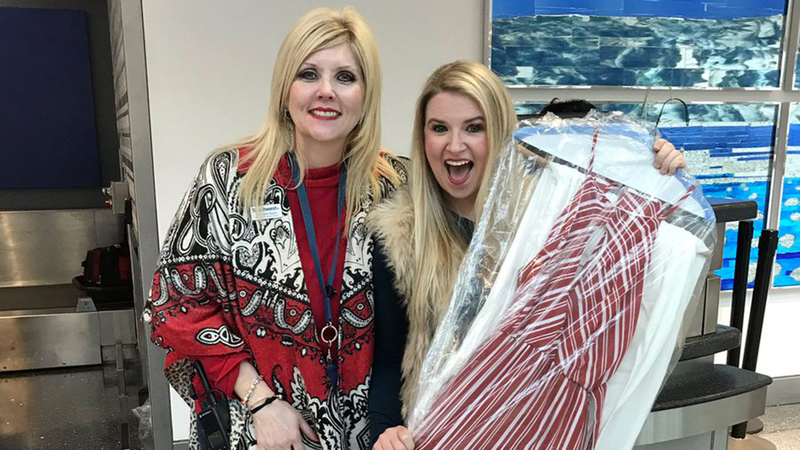 Southwest Airlines steps in to help get bridesmaid's dress

HOUSTON, Texas (KTRK) -- Southwest Airlines is being praised by a wedding party after coming to the rescue of a bridesmaid.

Southwest Airlines saves a wedding! A bridesmaid forgot her dress in Houston but the airline is sending it free of charge to Costa Rica. pic.twitter.com/Uf8NcKiBoI

A Houston area bridesmaid went into a panic after realizing she had forgotten her bridesmaid's dress on the way to Costa Rica.

"Yesterday evening, I got a call from my friend, in a panic, saying that she had left her bridesmaid dress in Cypress at the alterations place," the bridesmaid friend Rachel Turner said.

The bridesmaid asked Turner to pick up the dress from the alteration shop and start calling package delivery companies.

"I asked about overnight shipping to Costa Rica, and they told me the earliest it could get there would be Monday," Turner said.

That option wasn't going to work because the wedding was on Saturday.

In panic, Turner sent a message out on social media asking if anyone heading to Costa Rica could act as a courier.

Southwest Airlines chimed in and said the company could deliver the dress to the right place.

After checking with customs officials in Costa Rica, the airline told Rachel to head to Hobby Airport with the dress.

"One of our core values is to do what is right with a customer, and we like to connect what is important to our customers," Southwest Airlines said.

Ladies and gentlemen, it has arrived.