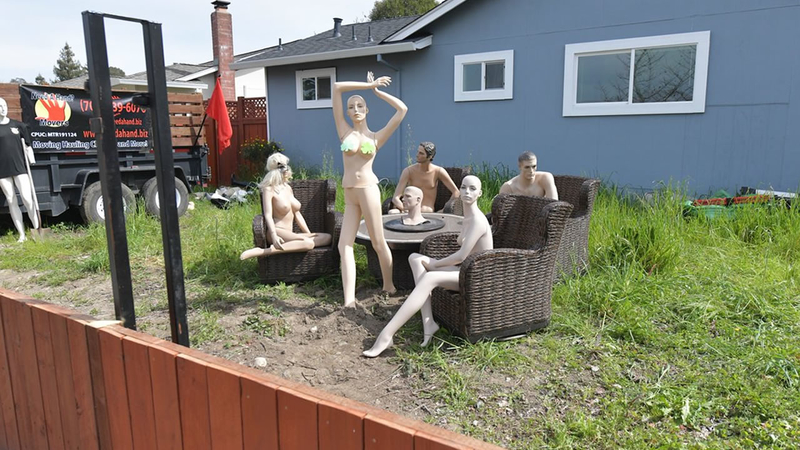 When a neighbor complained about his high fence causing a lack of visibility, and after the city wrote a letter telling him it violated a local ordinance, Jason cut that fence down to the maximum of 36 inches.

He was just trying to keep his dogs in the yard.

Now, his nosy neighbor really has something to look at. It's a garden party where the guests aren't smiling. But the host is.

"I couldn't bring myself to throw them away. I was going to use them for target practice," said Windus, about the mannequins in his front yard. Now, he says they serve a higher calling.

The rest of the neighborhood loves Jason's Garden Party.

As of now, #SantaRosa is not talking about the ordinance which requires drivers to be able to see around a corner. #abc7now Neighbors we encountered love the garden party. "Now they can see everything in my yard," since he cut the fence to no more than 36 inches. As required pic.twitter.com/LinnaUiCJL

"The main parts are covered," said Valerie Palmer from a passing pick-up truck.

The city of Santa Rosa sent him a notice of a zoning violation for a fence that is too high and blocks a suburban corner.

"It is very serious. They made me freak out," said Jason, as he showed us the official paperwork. "They were going to fine me every day it wasn't taken down."

So Jason called a friend with a big saw, and cut off the top of the fence to make this corner fit code. It's 36 inches now. But Jason was not finished.

"I guess the average person would get angry and cop resentment? I throw a naked party in my yard."

Jason Windus. It's been four day since he put up the garden party.
"I'm waiting. If they didn't like the fence, how do they like this?" Neighbors love it. All except the one who initially complained. #Abc7now #santaRosa #SonomaCounty pic.twitter.com/eVYytalYvU

Which led to a sign for a still-anonymous neighbor, and what appears to be perfectly legal compliance.

"They wanted me to tear down my fence to see inside my yard, and now they get to." With steely, defiant stares.

A spokesperson for the city of Santa Rosa notes that this was a zoning code violation.

Is this the cat that swallowed the canary? He's a mover by profession. Had the mannequins lying around. pic.twitter.com/ezDh3gnjGj

Nothing tops a garden party. Jason Windus of Santa Rosa and his popular protest against a neighbor who complained about his high fence. Jason cut it down. Now this. #abc7now #SantaRosa #SonomaCounty pic.twitter.com/TfCl8KDFI8