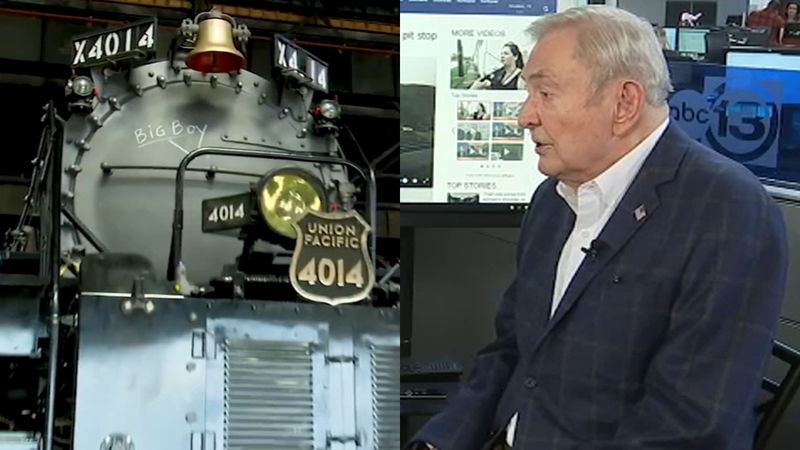 Houston, Friday's the last day to see the Union Pacific Big Boy train tour in our city. Big Boy will be departing at 10 a.m.

ABC13 anchor emeritus Dave Ward recalls his childhood years and the times when the "Big Boy" locomotive came through Houston.

Big Boy No. 4014 locomotive arrived on Wednesday, Nov. 6 at 7 p.m. at the Houston Amtrak Station on 902 Washington Avenue.

The pit stop comes with the chance to go inside and experience the Union Pacific Rail Car, which is a multi-media walk-through exhibition that provides a glimpse at the past, according to a press release.

"It's almost the size of a Boeing airplane, and it is strong enough to pull 16 Statues of Liberty uphill," said Kristin South, director of communications for Union Pacific. "It's 1.2 million pounds and 133 feet long."

Called a Big Boy locomotive, it was one of 25 steam engine vehicles built by Union Pacific in the 1940s. Only eight still exist today, and many thought they'd never see a Big Boy in operation again.

Big Boy getting FIRED up for 10 a.m. departure

"The last time a Big Boy locomotive operated was 60 years ago, back in 1959," South said in a phone interview. "And, as you can imagine, you don't go to a hardware store or a car parts store and pick up pieces for a locomotive of this size. So the team had to build this locomotive. In many of the cases, many parts are made from scratch again."

The pit stop in Houston is part of its tour across the southwest to commemorate the transcontinental railroad's 150th anniversary.

Big Boy size comparison. That’s the train behind me. Maybe zoom in a little to see it better? #abc13eyewitness pic.twitter.com/gZ7usGTZ1J

If you want a chance to see Big Boy, it will be passing by these following locations:

The Galveston Railroad Museum offers visitors the unique experience of riding inside a train caboose for a mile.