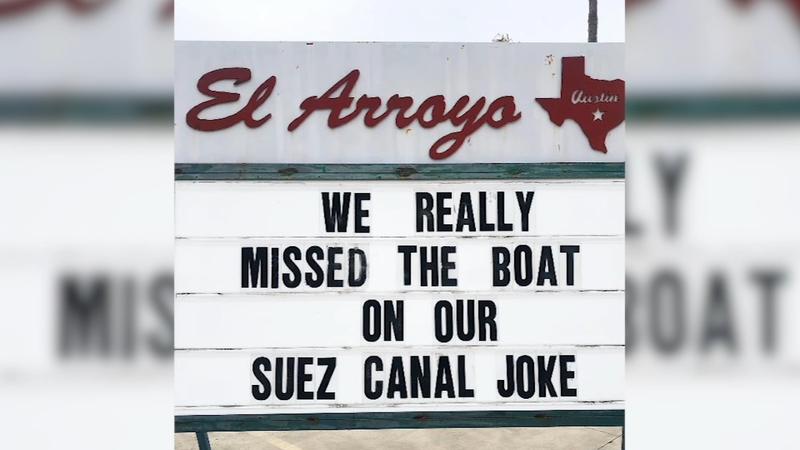 Famous El Arroyo sign in Austin missing? It was a joke

AUSTIN, Texas (KTRK) -- The Texas capital city is known for a lot of things.

Many of them are weird.

Now, the case of a missing world-famous sign outside a popular 5th Street Mexican restaurant can be added to that list of weird... or perhaps you can mark it in the category of timely and clever.

The landmark El Arroyo sign was reported missing and restaurant representatives claimed it was stolen, according to posts on social media.

"It is with great sadness that we share some disheartening news... Our famous marquee sign has been stolen," El Arroyo staff tweeted Thursday. "If you have any information about the whereabouts of the sign, or any leads, please comment."

It is with great sadness that we share some disheartening news… Our famous marquee sign has been stolen. If you have any information about the whereabouts of the sign, or any leads, please comment. #BringBackTheSign #ElArroyoSign pic.twitter.com/4aeiJVPpPB

Commenters were immediately suspicious of the claim, since it was posted on April Fools Day.

"This better be an April Fools joke or someone is catching (expletive)," @MirandaGirl24 tweeted in response.

While the sign was indeed missing, according to KXAN-TV, a server who answered the phone when ABC13 called Thursday morning was careful with his words.

"It was stolen," Gilberto Camacho told ABC13 with a pause. "At least as far as I know. That's what the manager told me anyway."

The manager, identified only as Joe, wasn't available for comment Thursday morning.

The drama took a turn just after 12:15 p.m. when El Arroyo shared a recorded video of Gov. Greg Abbott showing animated concern about the sign.

"I said alcohol to go... not signs to go," Abbott said on-camera. "That sign is missing. We must find it. I'm asking the DPS to help us find that sign."

Abbott's video, featuring the governor wearing a tie while in his Capitol office, was obviously recorded on a day other than today, since he was seen in live ABC13 streaming video along the Texas border at the same time the clip was tweeted.

A message from @GregAbbott_TX pic.twitter.com/EjAk1NAWTs

"I saw that on Instagram this morning and thought 'This has got to be an April Fools joke!" said Austin police public information specialist Stephanie Jacksis when reached by phone.

Jacksis said she would check police records to determine if a report had been made about the sign's disappearance, but there was no need for the follow-up call.

An afternoon Instagram post from El Arroyo revealed the signs' whereabouts, a relocation in conjunction with a promotion with the drinkware and cooler maker, Yeti.

"Y'all fell hard for that one, huh?" El Arroyo posted.

The restaurant's rotating quips have gained a cult following among Austinites and any lucky visitor who comes across them. The sign has become a bellwether for the business as a focus of merchandise including candles, apparel and a coffee table book compilation of some of the best versions.

Some of its past signs include, "Next week has been exhausting," and "Memes are just public inside jokes."

The sign's daily message of wit, wisdom and humor are the result of a team of about 15 people, including the restaurant's owners, who brainstorm ideas via email, the Austin Business Journal reported in 2014.