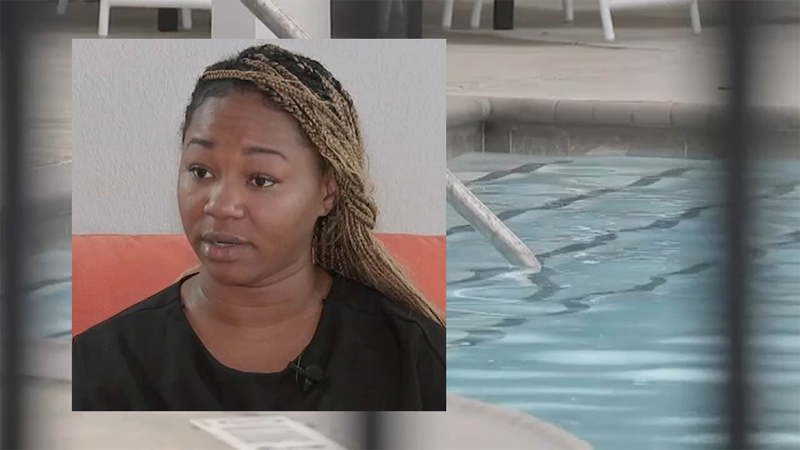 TEXAS CITY, Texas (KTRK) -- A Texas City mother says she and her family were kicked out of their community pool because of the color of their skin.

It happened Saturday at the Lago Mar, a master-planned community near I-45 South.

Tramica Thomas says she and her five children were excited to use their neighborhood pool for the first time.

"We were sitting there, they were in the pool having a good time," said Thomas. "The kids were super excited to be there."

But Thomas says the racial profiling against herself and her family began within 15 minutes of their arrival, when a lifeguard tried to tell her she had too many guests.

"He said 'Well, who are these guys in front of me right here?' recalled Thomas. "I said 'I don't know who they are,' mind you, they were black, but they were not with me."

She says the conversation ended there, and thought the issues were over until minutes later, she says a Texas City police officer arrived.

"He asked me my name and he asked me to get out of the pool and I said, 'Why?' and he said, 'Well, the lifeguards are requesting you to leave.'"

In cell phone video captured by Thomas, the officer is seen waiting to escort her family out of the pool area.

ABC13 Eyewitness News reached out to the Lago Mar Homeowner's Association, and they claim issues began when "one of her toddlers had to be saved from the water by a lifeguard."

But Thomas says it was her 6-year-old daughter, who was wearing a floating device, and was not saved.

"She went to the edge of the pool and was holding on to the concrete and was needing help to actually get out of the pool," said Thomas.

"The Lago Mar Homeowner's Association takes all residents' concerns very seriously. On Saturday, a resident and her party were asked to leave the pool due to their unruly and unsafe behavior. After several polite requests to follow pool rules and to supervise their underage guests, the lifeguard on duty asked the resident to leave. This request was for the safety of their unsupervised children as well as the other pool patrons. The safety of our residents is our top priority, the pool's rules and regulation are in place to protect all residents and their guests."

Thomas says a lifeguard did not ask her to leave.

There are at least half a dozen cameras recording pool activity, and Thomas says the surveillance video will clear her name. She says there is only one reason why police were called on her family.

"If someone is targeting based off of race, they shouldn't be working here because this is a diverse community," said Thomas.

The Thomas family filed a citizen's complaint against the Texas City police officer who they say threatened to jail them.

Texas City Police confirmed they are looking into the complaint and tell ABC 13 Eyewitness News there is no clear protocol for their officers when dispatched to a private neighborhood pool.

They promised to release a statement on their findings once their internal review was complete.