Esports championship brings students from across the country to Houston 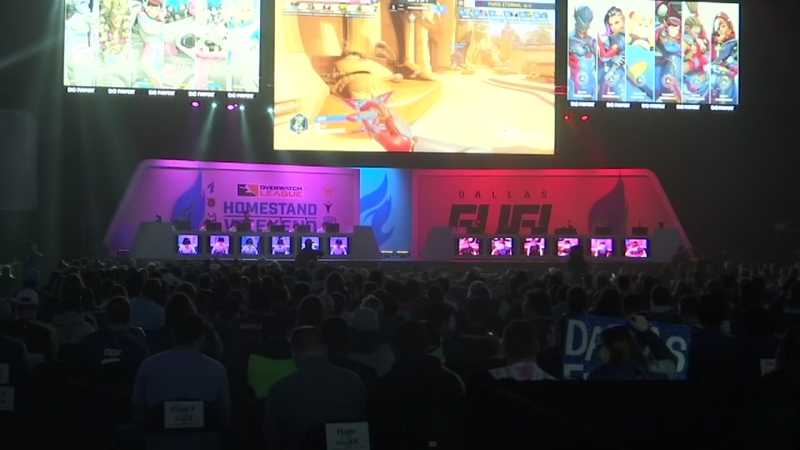 ALLEN, Texas (KTRK) -- An up-and-coming Esports league is adding another layer to a Texas rivalry.

The Overwatch League hosted an event for the first time in Texas in late April. The "Homestand Weekend" featured several teams that played in front of a sold-out Allen Event Center.

The teams are tied to cities across the globe, including Houston. The league's first Texas venture put an emphasis on the two Lone Star State teams, the Houston Outlaws and Dallas Fuel.

As the two teams squared off, the Allen Event Center was filled with 4,500 screaming fans, waving signs, towels, and Texas flags. Some of those fans made the four-hour trip from Houston early in the morning.

You may not have heard of the league, but this is serious business. Players make a minimum of $50,000 and the winning team at the end of the season splits a million-dollar prize. The league is attracting corporate sponsors.

It's not only players making money, but there are also mascots as well, with performers getting paid to create costumes, and post to social media.

Normally, games are played in Los Angeles, but the league is trying to change this. Some teams are building, or renting space for home games, a development Houston Outlaws fans are waiting for.

"When they eventually get their stadium built, or rented, I'll probably go once a month," Shack said.

"Then it would be easier to be able to support their team, because not everyone is able to drive four hours from Houston to Dallas," Glory Fairchild said.

The expansion is also something the players want as well. Houston Outlaws player Jake Lyon spoke to ABC13 Eyewitness News about the possibility of finding a permanent home in Houston.

"To take that offline, and bring all those people in person, the passion only goes higher," Lyon said.

The four-hour drive to Dallas was one Myles Moise had no problem making. He's not only a Houston Outlaws fan, but he's also trying to become an Overwatch League player.

"Eventually, I just kept on playing, and I got really good," Moise said. "I found out I was a top 500 grandmaster, so I realized I could probably get a scholarship to college."

That's right, he received a college scholarship to play video games. "If you really want it, go for it, but make sure you have decent enough grades," Moise said.

To other fans, the league means a whole lot more than money to pay for school. It's a chance to feel included.

Instead, they focus on video games. Now, they have the ability to experience what the other top Texas rivalries fans get to enjoy, and for them, it might even be better.

"I want that energy," Julia Moacyr said. "The whole passion for the industry, Texas home game. Everyone versus each other. I really want that."

Thanks to this up-and-coming Esports league, these fans now can get that.