Developer cuts down large oak trees in dark of night 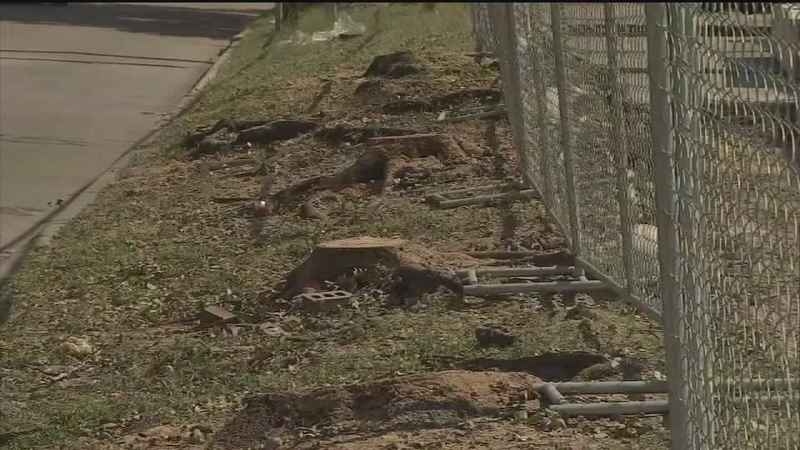 Trees cut down during restaurant remodel

HOUSTON (KTRK) -- To cut down six large oak trees on one of the most traveled streets inside Houston's inner loop is unusual. To take them down after dark is even more so.

So it was Tuesday night, at the intersection of Kirby and North Blvd. Had it not been for the closure of the Greenbriar freeway exit, Mary Nugent might have missed it. But as she drove down what she said was a familiar street, "it took my breath away," she says.

The oaks were planted a generation ago, more than 20 years, by the Boulevard Oaks Civic Association, and Trees for Houston, which aims to green up the city in the face of ongoing demolition and development.

Nugent and others tried to reason with the landscapers, but without success. Eventually, the trees were reduced to mulch.

What makes this more than the downing of trees, is that the trees were public property, donated to the city and planted on the city easement.

Now it's become a matter for the city legal department, which is investigating the matter.

The city has fined other developers and contractors who removed trees on public rights of way in the past year. The largest fine to date was $300,000 involving trees in the Heights area.

The trees on Kirby were cut down just inches from where an old Wendy's restaurant is going through a remodeling project, with a new franchise owner.

Lias Steen, the property owner who leases the land to the restaurant owner, says he sent an email stating, "I am extremely disappointed he took down the trees under cover of darkness ... And I am looking at terminating our lease."
Related topics:
societyhoustonconstructionfast food restaurant
Copyright © 2021 KTRK-TV. All Rights Reserved.
TOP STORIES
Isolated street flooding possible ahead of a rare June front overnight
Houston records over 100 more homicides compared to June 2019
14-year-old shot in face in argument over girl, deputies say
Mayor pledges $10K to catch a great-grandmother's killers
Memoir 'On Juneteenth' reflects on life in segregated Conroe
Former Sheldon ISD teacher accused of having sex with student
Former Houston mayoral candidate hopes to bring 3rd political party to Texas
Show More
Luby's finds buyer for cafeteria brand and 32 Texas restaurants
8 arrested during protest outside of Sen. Ted Cruz's home
Woman believed to be dismembered last seen alive 3 years ago
Woman with gunshot wound found in street near middle school
1 killed when SUV slams into pickup on Eastex Fwy
More TOP STORIES News