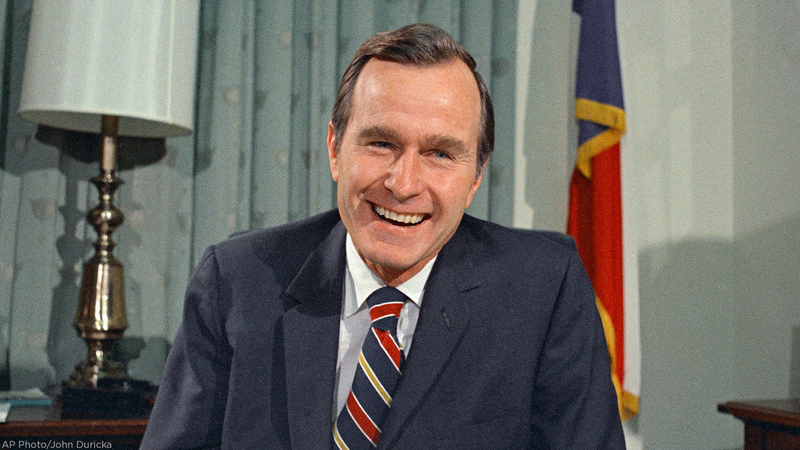 Former President George H.W. Bush is being posthumously hailed by leaders across the political spectrum and around the world as a man not only of greatness but also of uncommon decency and kindness. Look back at some of his most memorable quotes:

"We know what works: Freedom works. We know what's right: Freedom is right. We know how to secure a more just and prosperous life for man on Earth: through free markets, free speech, free elections and the exercise of free will unhampered by the state." - Jan. 20, 1989, during his inaugural address.

"Look to the very heart of Europe, to Berlin, and you will see a great truth shining brighter with each passing day: The quest for freedom is stronger than steel, more permanent than concrete." - November 1989, as the Berlin Wall was crumbling.

"The 'American Dream' means giving it your all, trying your hardest, accomplishing something. And then I'd add to that, giving something back. No definition of a successful life can do anything but include serving others." -June 2, 1995, in an interview with the American Academy of Achievement

"I plan to put something back into society, and not at the head table, not always in the glamour, certainly not with a lot of news attention." - January 1993, days before leaving office.

"I have spoken of a Thousand Points of Light, of all the community organizations that are spread like stars throughout the Nation, doing good. We will work hand in hand, encouraging, sometimes leading, sometimes being led, rewarding. We will work on this in the White House, in the Cabinet agencies. I will go to the people and the programs that are the brighter points of light, and I'll ask every member of my government to become involved. The old ideas are new again because they're not old, they are timeless: duty, sacrifice, commitment, and a patriotism that finds its expression in taking part and pitching in." - Jan. 20, 1989, during his inaugural address.

"I do not mistrust the future. I do not fear what is ahead. For our problems are large, but our heart is larger. Our challenges are great, but our will is greater." - Jan. 20, 1989, during his inaugural address.

The life and career of George HW Bush

"I do not like broccoli, and I haven't liked it since I was a little kid and my mother made me eat it. And I'm president of the United States, and I'm not going to eat any more broccoli." - March 22, 1990.

"Who would have thought that I would be working with Bill Clinton, of all people? ... It's been an eye-opening and enjoyable experience for me to work with him on something truly apolitical." - Oct. 25, 2005, discussing his work with former rival on tsunami and hurricane relief.

"To those who say we no longer need a CIA, I say you're nuts. To those who want to dismantle CIA or put it under some other department ... you're nuts, too. And to those who feel the right to know takes precedence over legitimate classification of documents or over protecting our most precious asset, our people, the same to you. You're nuts, and so's the horse you came in on." - Sept. 17, 1997, at ceremony marking the 50th birthday of the CIA.

"I learned more from Ronald Reagan than from anyone I encountered in all my years of public life." - June 11, 2004, at the funeral for former President Ronald Reagan.