Wind had threatened to ground the giant inflated characters, with officials announcing less than an hour beforehand that the balloons could fly, if in a down-to-Earth way.

As the parade continued - even as city emergency officials sent out a public alert about wind gusts - handlers struggled with some balloons and pulled them close to the ground.

Astronaut Snoopy, a new version of a longtime parade favorite, was among the giant inflated characters leading the lineup.

Parade officials and the New York Police Department continue to keep an eye on wind gauges along the 2.5-mile parade route that snakes through Manhattan.

At 7 a.m. Eastern time the NYPD tweeted that the balloons would be able to fly as planned "as of now." And the parade stepped off at 9 a.m., balloons aloft.

7am UPDATE—As of now the balloons will fly! 👍

Lets hope the wind stays calm at the #macysthanksgivingdayparade pic.twitter.com/Akt2crmTSe

As the parade progressed, wind conditions did appear to be impacting some of the larger balloons. 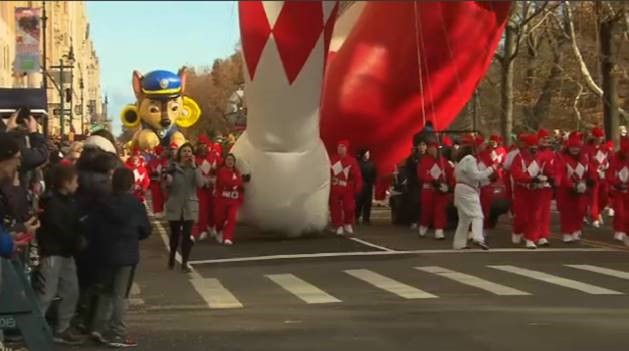 And the left arm from the SpongeBob SquarePants with Gary balloon dragged on the ground as it passed one camera, as the handlers worked to pull the balloon to the right. 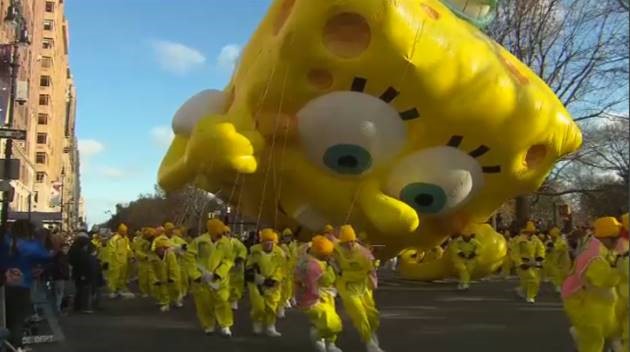 One balloon did not make it to the end of parade route.

Ronald McDonald sustained a tear in his left leg, attributable to the heavy winds, near the start of the parade.

The leg gradually deflated, and the decision was made to pull the balloon off the route at 42nd Street.

Macy's issued a statement after the parade addressing the wind issue:

While ultimately the wind conditions allowed our signature balloons to join the lineup, some of the balloons suffered stress and tears during the overnight inflation which resulted in the Ronald McDonald giant balloon being pulled midway through the Parade. Three smaller balloons including two stars and the Yayoi Kusama designed art balloon never left the balloon staging area. All of the extensive planning and safety protocols in place for the Parade helped to prepare the team to execute a fantastic event despite these minor challenges.

Balloons cannot fly if sustained winds exceed 23 miles per hour or if gusts are stronger than 34 miles per hour. If it is too windy, the balloons are instead walked through the streets.

Each of the 16 giant character balloons has a risk profile depending on the size and weight.

There have a been a few incidents of balloon mishaps over the years. Back in 1997 on a very blustery Thanksgiving Day morning in New York City, the iconic Cat in the Hat balloon got caught up in some strong wind gusts.

The Vault: Out of control Cat in the Hat
EMBED More News Videos

On a very blustery Thanksgiving Day in New York City in 1997, the iconic Cat in the Hat balloon got caught up in some strong wind gusts

The balloon handlers couldn't control it and it blew into a lamppost, injuring four spectators.

In 1993, an off-duty police officer was struck after Sonic the Hedgehog hit a light post. The officer's shoulder was broken.

There were also injuries from an incident in 2005 in which a huge M&M balloon bounced off a building and hit a light pole, tearing part of the pole down. An 11-year-old girl and her 26-year-old sister suffered chipped teeth and cuts that needed stitches, as well as bruising.

After the 1997 and 2005 accidents, the new safety strategies were adopted.

Aside from the years the parade was canceled completely due to bad weather, the balloons have only been grounded once -- back in 1971. Officials with the parade made the assessment that it was too dangerous to fly the balloons, even before the city ever placed a rule on the balloons grounding criteria.