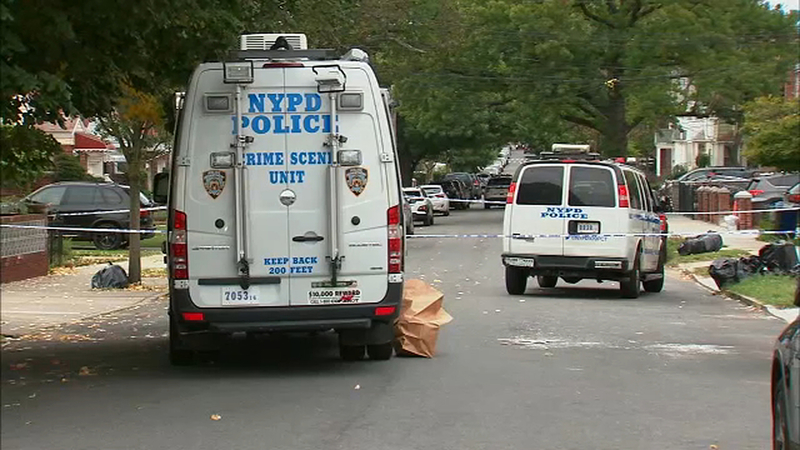 QUEENS, New York -- A woman is facing charges after authorities say she stabbed three babies and two adults inside a birthing center operating out of a building in Queens Friday morning.

The victims were found inside the center just after 3:30 a.m. The Mei Xin Care Incorporated was unlicensed, according to authorities.

The infants were taken to local hospitals in critical but stable condition.
EMBED More News Videos

CeFaan Kim has the details from Flushing.

A 63-year-old female daycare worker was also stabbed several times in the torso, and police say a 31-year-old father of one of the babies heard her screams, intervened and was stabbed in the legs.

The female victim is in surgery for her injuries at New York-Presbyterian/Queens.

"We pray that all of the victims will be fine and will survive these injuries," Queens District Attorney Richard Brown said. "We are hoping these young babies, small and so very fragile, are also strong enough to overcome this horrible act of senseless violence."

The suspect was found unconscious in the basement with self-inflicted slash wounds to her wrist. Police said she worked at the center.
She is in police custody at New York-Presbyterian/Queens, where she is also being treated for critical injuries. A motive hasn't been determined.

Police recovered a butcher knife and a meat cleaver at the scene.


Nine babies, five girls and four boys, were in the house during the stabbings, and all of them were accompanied by parents. Part of the building houses living quarters and the rest appears to be a nursery.
Police believe the stabbing location is a place where Chinese women, some of whom may have come to the US on visas, give birth to establish their child's residency. The women then leave the country and attempt to return at a later date.

Some community members referred to the location as a "maternity hotel" or a communal setting for immigrant parents who could not care for their newborns in the traditional way.

The local assemblyman said the female suspect was "in distress, most likely with some mental health illness, and had no business being around infants."

"After the horrific incident at Mei Xin Care in Flushing, the health department is investigating the facility. Although it is still early in the investigation, the department can confirm that there was no home day care license for the location. NYPD is the lead on this investigation."
Report a correction or typo
Related topics:
new yorkday carechild injuredu.s. & worldslashing
Copyright © 2022 WABC-TV. All Rights Reserved.
TOP STORIES
51-year-old suspect in corporal's ambush killing on the run
Sergeant was to walk daughter down aisle until his hit-and-run death
Mom shares story of son's 'scary' battle with COVID complications
H-E-B's Scott McClelland retirement and what's next
Drying out, but staying cool this week
LULAC set to sue Houston City Council for lack of Hispanic members
New security director aims to improve safety for Jewish organizations
Show More
IRS changes you should know before submitting taxes
Cause of death revealed for 23-year-old woman found dead after date
Texas among states suing Google over claim it's misleading consumers
Man accused of stabbing K-9 in The Heights now charged
'We knew something big exploded': ABC13 recalls moment of Watson blast
More TOP STORIES News