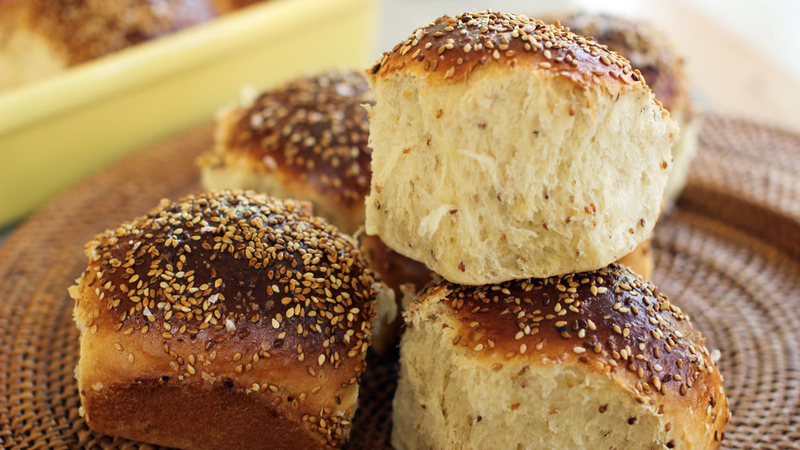 FDA calls for sesame warning to be included on food labels

The Food and Drug Administration is calling for new food labels for products containing sesame.

The FDA doesn't have the legal power to label packages, but it can ask manufacturers to do so in draft guidance that was recently released.

ABC's Chief Medical Correspondent Dr. Jennifer Ashton was on Good Morning America to explain what foods to watch out for.

"Sometimes it's obvious on the ingredients list and sometimes it's hidden. So take a look at this list. Sesame containing ingredients include hummus or tahini. Even some baked goods contain sesame: Snack foods, candy, spices, the list goes on and on, so read those labels and if in doubt, avoid it. This is really important."

The guidance to label foods that contain sesame comes after a Northwestern University study from 2019 that estimated 1.5 million Americans have a sesame allergy, which can be just as dangerous as a nut allergy.

Sesame allergy affects children and adults, and are unlike allergies such as milk or egg, which often develop early in life and are outgrown, the Northwestern University study suggests.

"Many Americans are allergic or sensitive to sesame, and they need the ability to quickly identify products that might contain sesame," Susan Mayne, Ph.D., director of the FDA's Center for Food Safety and Applied Nutrition said in a press release. "While most products containing sesame declare it as an ingredient, there are times when sesame is not required to be declared by name on the label, such as when it is used as a 'flavor' or 'spice.' Other ingredients, like 'tahini,' are made by grinding sesame into a paste, but not all consumers are aware that tahini is made from sesame. In these instances, sesame may not be declared by name in the ingredient list on a product's label. We are encouraging food manufacturers to voluntarily list sesame as an ingredient whenever a product has been made with sesame."
Report a correction or typo
Related topics:
food & drinkfdapeanut allergyu.s. & worldwarningfood safety
Copyright © 2022 KTRK-TV. All Rights Reserved.
TOP STORIES
Preacher reaches out to suspect who stole from his church twice
Carjacking suspect threw 3-year-old out of truck, mother says
Officer shoots suspect in northeast Houston, HPD says
Fifth Ward residents upset over Union Pacific campaign donations
Expert weighs in on when you can buy a car amid chip shortage
Lina Hidalgo suggests DA could have her 'indicted' as political ploy
Santa Fe librarian still trying to make sense of high school shooting
Show More
Houston janitors fight for an increase in hourly pay
Police have no leads on skeletal remains found nearly 6 months ago
Here's why we're increasing rain chances and rainfall amounts
Houston Dash standout expresses excitement on equal pay decision
18-year-old arrested in shooting death of man with cane, HPD says
More TOP STORIES News