Letter to Santa gets grandpa day off work 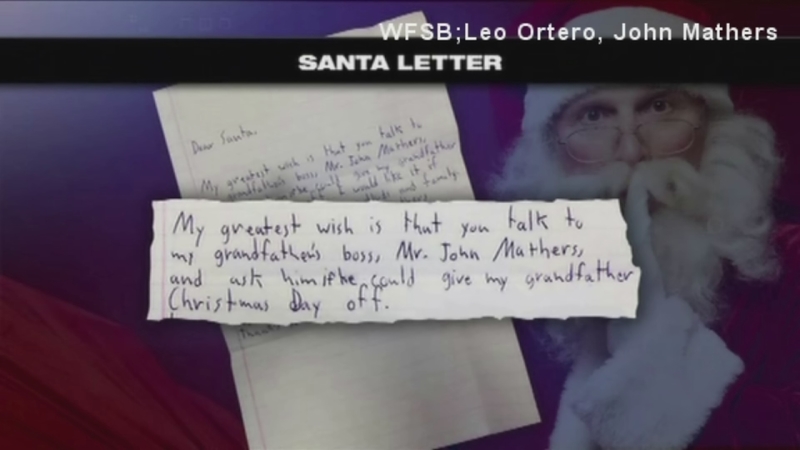 Letter to Santa gets grandpa off work

HARTFORD-NEW HAVEN, CT -- A Connecticut grandfather is getting a gift from Santa he will likely never forget, thanks to his grandson's heartfelt letter, WFSB reports.

Kids make a lot of special requests of the big guy at the North Pole, but little Julian wanted one thing more than any other. He wrote Santa a handwritten note which said, "My greatest wish is that you talk to my grandfather's boss Mr. John Mathers and ask him if he could give my grandfather Christmas Day off."

Ok, he didn't let the opportunity to make another request, finishing his letter to Santa with a PS. "If you have time and think I earned it, I would also love a Xbox 360."

The letter made its way to the manager of the hotel where Julian's grandfather works. He drafted a memo in response which read, "(Santa) was concerned that you were planning to work on Christmas Day. Your grandchildren are quite upset about this! I think it would be best if you planned to take the day off and spend it with your family. Work can wait until after Christmas."
Related topics:
societysanta clausholidaybuzzworthychristmasfamilygood news
SANTA CLAUS
Santa's house valued at more than $1 million, according to Zillow
Pasadena firefighter injured in hit-and-run during Christmas event
Kids 5 and up can get vaccinated for free at GRB Convention Center
Italian bishop apologizes for telling children Santa doesn't exist
TOP STORIES
11-year-old has spinal cord fracture after drive-by shooting, mom says
$1.8M worth of stolen electronics recovered in cellphone store raid
Grid 'more reliable than before' to address summer demand, ERCOT says
Hotel clerk punched by robbery suspect who tried stealing her purse
Bonds set at $1M for mom, $250K for dad in 2-year-old boy's death
Harris Co. deputy's funeral arranged for Wednesday
Doctors warn of new sub omicron variant wave BA 2.12
Show More
New Jersey beach sand collapse leaves teen dead, sister injured
All XFL games to air on ESPN, Disney platforms
Man claims self-defense in shooting death of woman, HPD says
Suspect missed 2 months of rent before alleged kidnapping, victim says
Pattern change brings more rain chances to the forecast
More TOP STORIES News