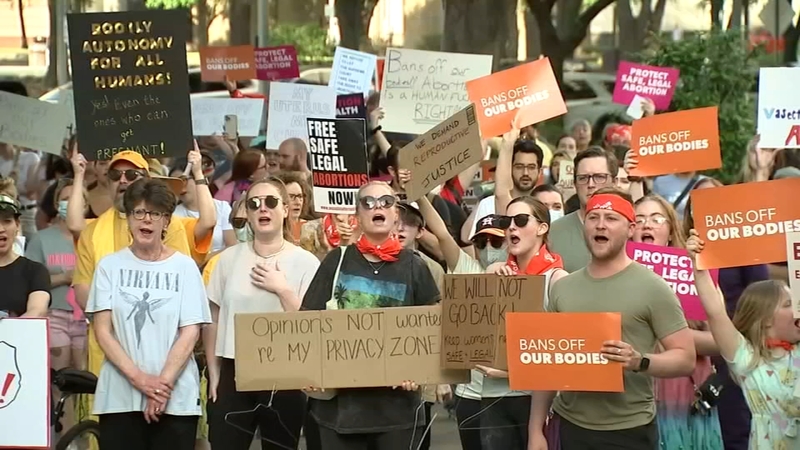 HOUSTON, Texas (KTRK) -- A leaked draft opinion uncovered the Supreme Court is considering overturning federal abortion rights. Although it's not a final decision, the news has sparked reactions from both sides of the aisle.

Dozens of pro-choice protestors took to the streets of downtown Houston to demand abortion rights.

HAPPENING NOW: A rally is being held at Tranquility Park in Houston by several pro-choice organizations They’re speaking out against the court *draft* that was leaked suggesting Roe could be overturned.

"It's sad because it's taking away access to healthcare for many, many women," said Houstonian Lane Fletcher.

A final decision hasn't been made by Supreme Court justices on whether to overturn Roe v. Wade. But the potential has some scared for the future.

"What it's going to do (is) push the most marginalized people in our community into really desperate situations," said ACLU member Blair Wallace.

Here are some of the signs we’re seeing at the rally. @abc13houston pic.twitter.com/8csJTQyBkC

"Abortions aren't going to stop. This is supposed to be giving people access to safe medical care. It's something that the state of Texas does not seem to understand right now," said Houston City Councilmember Abbie Kamin.

Protestors marched from City Hall to the downtown federal courthouse in hopes of amplifying their voices.

"This is something we've heard for many years could be happening. And I think a lot people didn't think it would go this far," said Congresswoman Lizzie Fletcher.

A large crowd is discontent with the potential decision to do away with the decades old abortion rights ruling.

A decision that is still yet to be made. As we wait for the highest court to finalize their opinion, pro-choice protestors say they won't stop fighting.