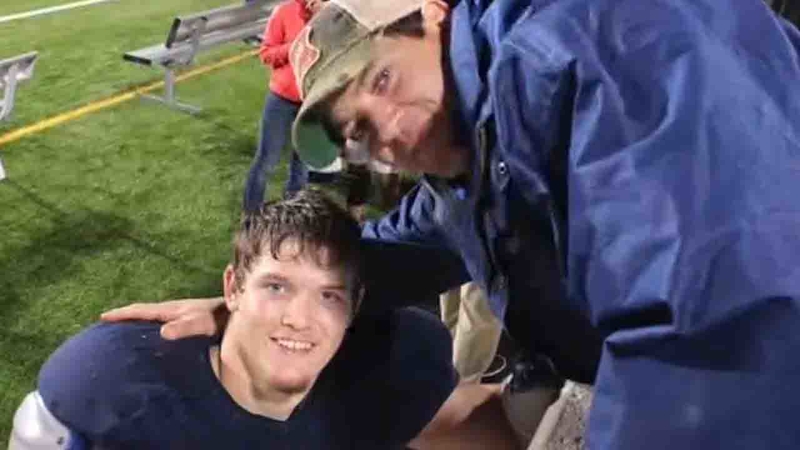 Blaine Padgett's father speaks out about the death of his son.

HOUSTON, Texas (KTRK) -- A former Rice football player has been arrested as homicide investigators look into the death of Blain Padgett.

Stuart "Mooch" Mouchantaf, 25, has been charged with delivery of a controlled substance resulting in death, a 2nd-degree felony that carries a penalty of five to 99 years or life in prison.

Mouchantaf is accused of giving a deadly pill to Padgett, whose body was found inside his bedroom by fellow players after he failed to show up for a Friday morning workout on March 2.

The Harris County Medical Examiner's Office concluded in June that Padgett, 21, died in his sleep due to toxic effects of carfentanil, an analog of the synthetic opioid analgesic fentanyl.

Blain's father, Mical Padgett, said he believes his son had no idea the pills he took were laced with carfentanil.

"He knew that he should not have been taking it, but he did so," Mical said. "I know if he was here, he would say, 'Hey, I take responsibility for this.'"

According to court papers filed by prosecutors, Houston police investigators found that Padgett bought pills from Mouchantaf, believing that they were Hydrocodone. It turns out the pills were laced with carfentanil.

"Blain knew about choices like drinking and driving and knew about choices, but I think that this is something that is fairly new, at least it's new to us, that you don't take anything from anyone unless a doctor has prescribed it for you, period," said Blain's mother, Windi Padgett.

A lethal amount of carfentanil is so small, it's invisible to the human eye. It was originally made as an elephant tranquilizer.

"Buyers need to understand that when they buy these pills on the streets instead of pharmacies, they are literally playing Russian Roulette," said Assistant District Attorney Paul Fortenberry. "These pills look like the real deal, but they, in fact, are far more dangerous than even cocaine or heroin and are far less expensive."

Mouchantaf was taken into custody on Thursday and questioned.

According to the roster on the Rice website, Mouchantaf is from Katy.

He graduated from Cinco Ranch High School, where he was a three-year starter for the Cougars. He also participated in Cinco Ranch's Peer Assistance and Leadership, or PALS, program.

He signed with Rice University in 2012 after playing at Blinn Junior College.

On Friday during his court appearance, a judge set his bond at $250,000 because he is considered a flight risk.

Police say Mouchantaf bought a one-way ticket to Lebanon and has family there. He must surrender his passport and wear an ankle monitor.

EXCLUSIVE: Only #abc13 cameras rolling as Former Rice University football player Stuart Mouchantaf went before a judge. The 25yo charged with delivery of a controlled substance. Police say he gave #BlainPadgett a hydrocodone laced with carfentanil. Blain took the pill and died. pic.twitter.com/GU2IAtFKxn

After news of the arrest, Padgett's father issued the following statement to Eyewitness News:

"On March 1 of this year my son, Blain Padgett, made an unfortunate decision to buy what he thought was a pain pill from someone he trusted. That pill contained carfentanil, a highly toxic drug not meant for human consumption. Blain always took responsibility for the decisions he made and never made excuses. So I'm here to speak for him. He did make a bad decision and it cost him his life.

I expect these individuals responsible for making, distributing and selling this poison to take responsibility and to also pay for this crime.

I want to thank HPD for their hard work and, especially Detective Mike Miller, for seeing this investigation through and arresting Stuart Mouchantaf, who admitted to selling this deadly pill to Blain.

The Padgett family is not about drama, but we want other mothers, fathers, brothers, sisters and friends to learn from our tragedy. We don't want another family to endure the pain we're enduring right now."

Padgett's family spoke to Eyewitness News on Thursday, talking about the last conversation they had with their son who injured his shoulder last fall and required surgery, ending his season.

They said he was determined to get back on the field. They spoke with him again on March 1.

"We had spoken on the phone 45 minutes to an hour," Mical, Padgett's father, said.

"That night was different. Blain was so excited about tomorrow. He had just been released from his surgery," Padgett's mother Wyndi said.

After finding out how their son died, the Padgetts say they decided to share their story because they wanted to warn other families.

Doctors say it's deadly because it causes the brain to suppress breathing.

"We're deeply saddened to hear about the latest developments in the investigation in the death of Blain Padgett, whose family continues to be foremost in our thoughts. We want to thank the Houston Police Department investigators assigned to this case for their hard work in the wake of this tragedy. In light of the fact that charges have just been filed, any further comment would be inappropriate at this time."