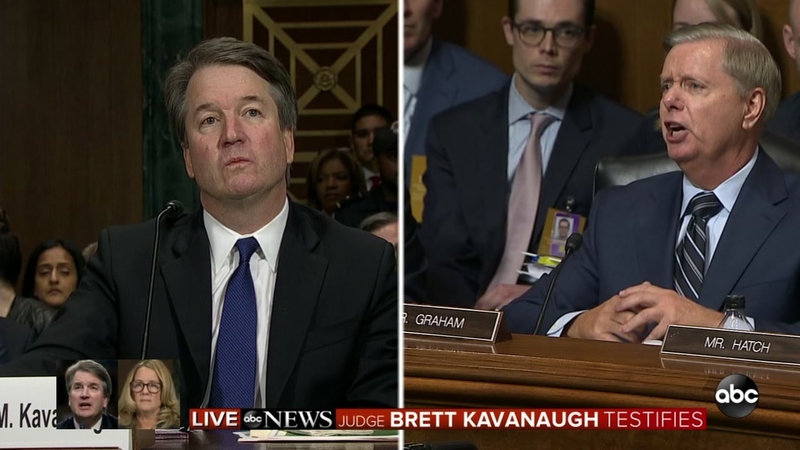 Republican Sen. Lindsey Graham suggested that there is no need for the FBI's supplemental investigation of Brett Kavanaugh to include talking to his former classmates about his drinking habits in college.

Graham, a member of the Senate Judiciary Committee and staunch supporter of Kavanaugh's nomination to the Supreme Court, told ABC News Chief Anchor George Stephanopoulos on "This Week" Sunday that the FBI probe would include talking to Christine Blasey Ford, who has accused Kavanaugh of sexual assault when they were teens; Deborah Ramirez, who alleges he exposed himself to her in college; and Mark Judge, a high school friend of Kavanaugh's.

Graham also said he thinks the FBI will talk to people whom Ford said were "witnesses," an apparent reference to people she said were at a small party where she was allegedly assaulted.

Kavanaugh has strongly and categorically denied the allegations of sexual misconduct and assault.

Stephanopoulos said, "It appears that the FBI will not be questioning those college witnesses who contradict Brett Kavanaugh's testimony about his drinking ... Isn't that relevant?"

Graham said, "No, I think you're trying to portray him as a stumbling, bumbling drunk, gang rapist, who during high school and college was Bill Cosby. Six FBI background checks over the years would have uncovered this."

In Thursday's hearing before the Senate Judiciary Committee, Kavanaugh testified that he had never blacked out or forgotten what happened while drinking.

"I like beer," Kavanaugh said under oath. "I still like beer. But I did not drink beer to the point of blacking out, and I never sexually assaulted anyone."

But some of Kavanaugh's former Yale classmates have disputed his characterization of his drinking habits at college including former classmate Lynne Brookes who told Good Morning America that she was "frustrated" when Kavanaugh responded to senators' questions about his college drinking by referring to his grades, athletic activities and acceptance to Yale Law School.

"The culture at Yale, those two things are not mutually exclusive," Brookes told "GMA" of academic excellence and partying. "I also was an athlete at Yale ... I went on to Wharton business school, and I drank in excess many nights with Brett Kavanaugh. So he was trying to portray that it's one or the other and at Yale... there's a lot of people for which that was both."
Stephanopoulos pressed Graham again later in the "This Week" interview, "Senator, isn't testimony about Judge Kavanaugh's drinking in college, if you're interviewing Deborah Ramirez, isn't that relevant?"

"He's had six FBI background checks. He's been on the political stage for 26 years. He's not a stumbling, bumbling drunk," Graham said. "I don't believe that you could accomplish what he's accomplished to have been a serial rapist in high school and stop it for the rest of your life. Not one person who he's been in charge of during his legal career has ever said he did anything inappropriate."

Ramirez claimed to The New Yorker that at a party in college where there was drinking, Kavanaugh "thrust his penis into her face," causing her to "touch it without her consent as she pushed him away."

Her attorney said Saturday that the FBI has reached out to Ramirez as part of the supplemental investigation.

Stephanopoulos asked Graham if the FBI would interview Julie Swetnick, a woman represented by lawyer Michael Avenatti who alleged in a sworn statement that she witnessed Kavanaugh, while he was in high school, "drink excessively and engage in highly inappropriate conduct," including "fondling and grabbing of girls without their consent."

Avenatti told ABC News on Saturday night that the FBI had not yet contacted them about Swetnick's allegations.

Graham said, "I think the allegation that she makes is outrageous. Not one Democrat mentioned it, but Mark Judge, who's named by Ms. Swetnick as being part of the gang rape and drugging women, will be asked did he ever see this happen or ... see Kavanaugh engage in it."

The Senate Judiciary Committee on Friday requested an FBI investigation that "would be limited to current credible allegations against" Kavanaugh. When the White House later that day ordered the investigation, President Donald Trump said it would be "limited in scope and completed in less than one week."

In response to reports Saturday that the White House was limiting, at least initially, whom the FBI should speak to and that Swetnick's allegations would not be included in the probe, Trump tweeted of the FBI, "I want them to interview whoever they deem appropriate, at their discretion."

Graham said that in addition to the FBI investigation of the sexual misconduct allegations, he wants the Senate Judiciary Committee to examine what he called "a despicable process."

"The FBI will do a supplemental background investigation. Then I'm going to call for an investigation of what happened in this committee," including how Ford's original, anonymous letter to Sen. Dianne Feinstein of California was leaked to the press, the South Carolina senator said.

"We're going to do a wholesale, full-scale investigation of what I think was a despicable process to deter it from happening again," Graham said.

Feinstein said no one in her office told the press about the anonymous letter, and the reporter who broke the story about the letter said his source was not the California senator's office.

Graham said he accepts Feinstein's denial but only as it pertains to her personally not telling the media about the letter.