CITYCENTRE developer has eyes set on 150 acres in Fifth Ward 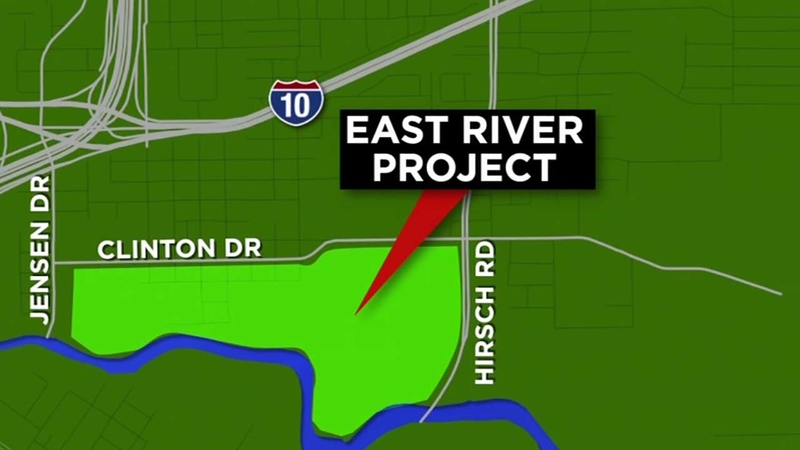 HOUSTON (KTRK) -- In the shadow of downtown, about 150 acres of property stretching for about a mile along the bayou waterfront could be one of Houston's next major mixed-use developments. The developer, Midway, is calling it East River. There's been a lot of curiosity for years among the people which live in the neighborhood as to what will happen to the land.

"I feel like this area is a little bit of a hidden gem within the Houston city limits," said nearby homeowner Robert Meaney.

The property stretches along the waterfront from about Clinton and Jensen, along Clinton Drive to Hirsch.

"Everybody's excited about the potential, sitting on the edge of their seats for the next big news," said Meaney.

Residents began seeing signs of life recently with the re-planting of dozens of mature trees, moved from Post Oak Blvd and Uptown Houston. Midway, which developed CITYCENTRE, has noted this property is so large it could fit four CITYCENTREs, so it expects the development to happen in phases over more than a decade, with different districts inside the overall project.

"We intend to create a variety of offerings to appeal to a wide range of customers as befits a diverse, international and multicultural city," said Jonathan Brinsden, CEO of Midway, in the most recent news release available about the development.

Flanagan Payton is hopeful the historic neighborhood can find a way to take advantage of the economic boost.

"On some hands, we look at the development that's taken place on the south side of I-10 as really gentrifying our community, but it is welcome in the sense that it will help us increase the demographic from an economic status," said Flanagan Payton.

She hopes East River will attract the kind of things all people in the neighborhood need, perhaps a grocery store, and encourage the continued renewal of other main thoroughfares in the Fifth Ward like Lyons Avenue.