'Blacks can't walk or work in this neighborhood,' sign warns 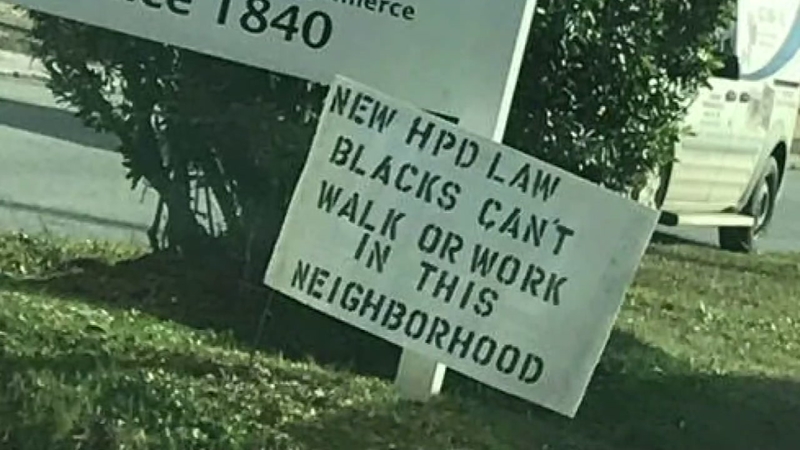 HOUSTON, Texas (KTRK) -- A controversial sign critical of the Houston Police Department and planted in a public median in the Sawyer Heights area is now in the trash.

The message is in neatly stenciled capital letters and was planted under the First Ward welcome sign in a public median on Taylor near I-10. That is until Gloria Perez saw it on Friday.

"I don't want anybody reading that," she told ABC13 Eyewitness News. "I thought it was really racist. No matter who it was towards. Both towards the black community, people of color, and the Houston Police Department. It offends everybody."

The mother took a picture, asked for advice on social media and on her way home, jumped out of her car and grabbed it.

"I decided to get it off the street. I didn't want any child reading that period, and thinking their dreams could be restricted based off of a sign," Perez added.

Perez threw it in the trash.

What drivers couldn't see from afar was a sexist insult along with a female Houston police officer's name on the bottom of the sign. ABC13 is not revealing that name.

Late Friday afternoon, HPD spokesman Victor Senties said he was not aware of the sign, but said the department is "looking into it."

Perez does not wish to silence anyone, but does not think the way the message was delivered was effective. Additionally, so-called "bandit" signs are against city ordinance.

"If you feel like you've been wronged, you should definitely speak up, but in a way that hurts everybody, I don't think it does any good," Perez said.