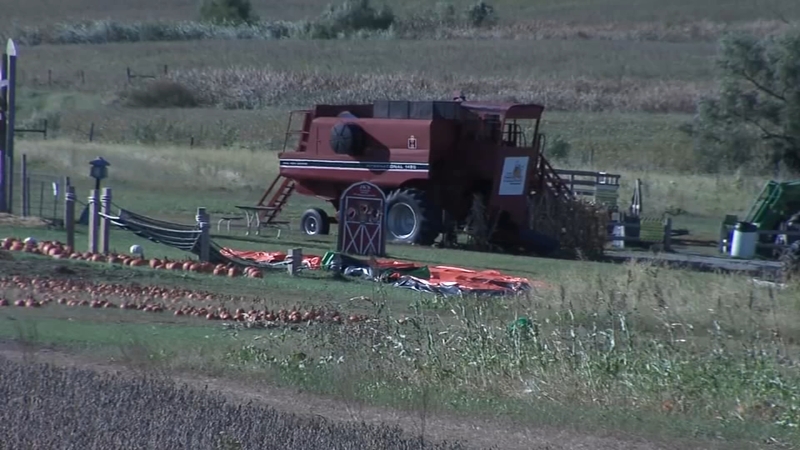 Toddler dies after bounce pad swept away at pumpkin patch

LINCOLN, Neb. -- A 2-year-old boy died after he and his 5-year-old sister were injured Wednesday night in an accident at a pumpkin patch in Nebraska.

Caleb Acuna and his big sister were playing on the bounce pad at JK's Pumpkin Patch, which is located just north of Lincoln, at a private event Wednesday night, according to the Lancaster County Sheriff's Office.

Although the pad was staked down, a strong gust of wind - around 60 mph - lifted it up into the air and caused it to flip over around 6 p.m. Caleb's sister was thrown off the pad, but Caleb was trapped in the pad, which landed about 40 yards away in a soybean field, KLKN reports.

Caleb suffered a critical head injury and his sister broke her arm. Both children were transported to Bryan Health West Campus, where Caleb was pronounced dead at 12:45 p.m. Thursday. He was taken off the respirator Friday morning, officials said.

A wind advisory for high wind gusts was in effect for Lincoln and the surrounding region at the time of the accident. It was not due to expire until 9 p.m. Wednesday.

"The description of this wind gust was that it really came up out of nowhere," Lancaster County Sheriff Terry Wagner told KLKN. "I don't think they would have let people on it had the wind been sustained. This was an abnormal incident where the wind gust came up and blew it."

After Wednesday's accident, owner Josh Kadavy issued a statement expressing great distress over the incident. KLKN said he did not wish to speak to the media.

The state of Nebraska does not have any regulations on bounce houses or bounce pads.