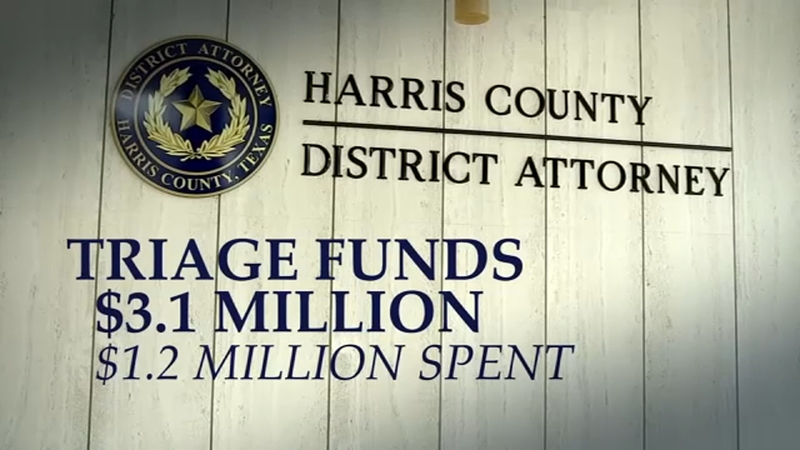 HARRIS COUNTY, Texas (KTRK) -- As he sits around a table with seven other prosecutors from the Harris County District Attorney's office, Mateo Gonzalez starts explaining a 2018 DWI case he's working.

The suspect was involved in an accident with two other vehicles. One of the witnesses isn't cooperating with prosecutors, says it's not a big deal and won't testify in the case. Another lives in Austin and can't miss work for a possible jury trial.

Even though there was enough probable cause to charge the suspect with a DWI, the evidence needed for a conviction just isn't there because when an officer pulled up to the scene of the crash, the suspect was sitting on the tailgate of his truck. 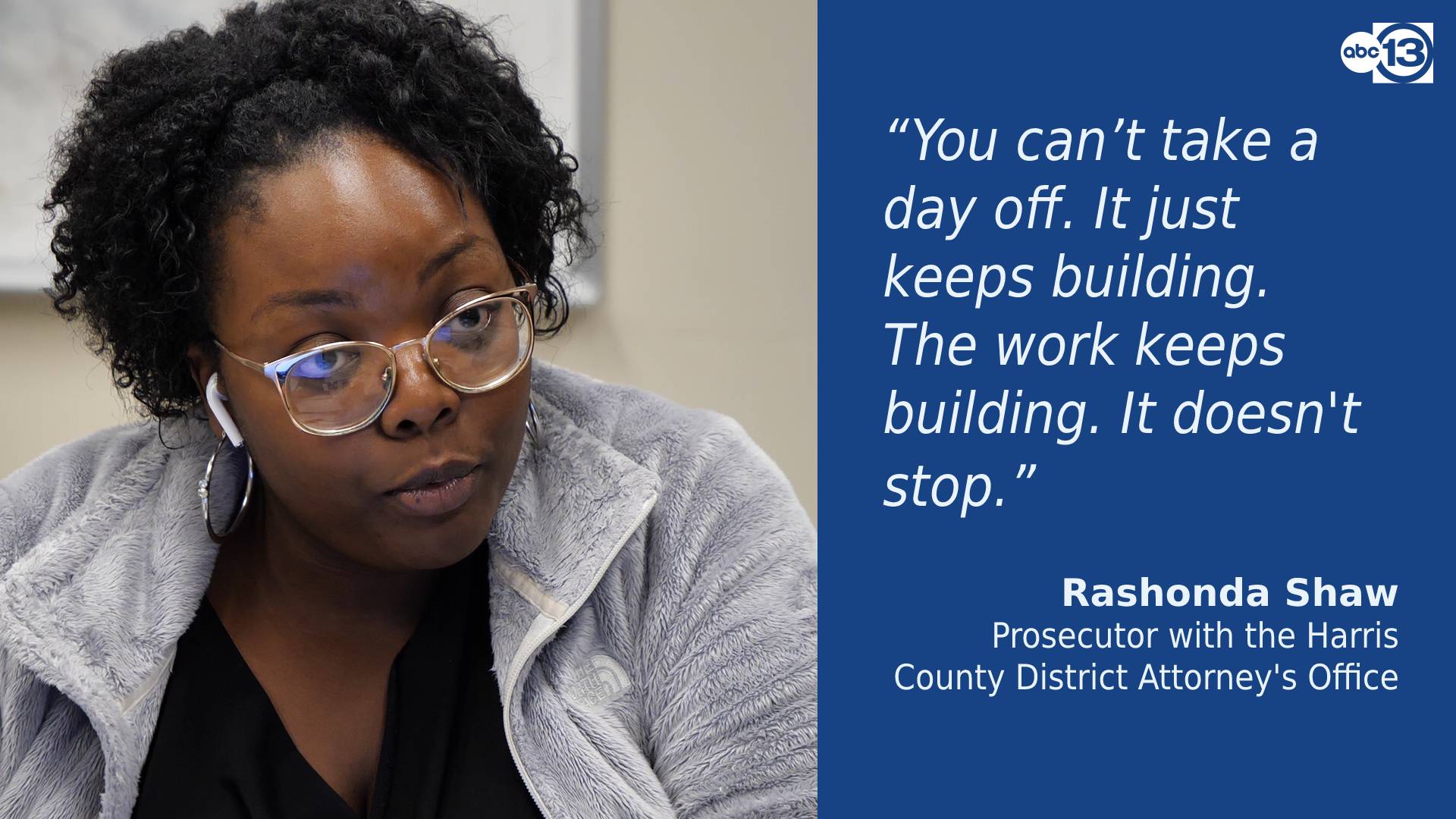 That DWI case is one of 40,729 active misdemeanor cases that need final resolution in Harris County courts - up nearly 30% from before the pandemic when there were 31,503 cases in February 2020.

The case is also just one of several the eight prosecutors were able to address April 14 during a four-hour overtime shift that ended at 9 p.m.

"We were already pretty much in a hole in terms of caseload because Hurricane Harvey displaced the DA's office from the criminal justice center," said Gonzalez, chief prosecutor for Criminal Court at Law No. 13. "Then we had a pandemic, which again slowed the wheels of justice so since that time, our caseload has only gotten bigger and so it's taken a heavy burden on us."

Last year, county commissioners approved $3.1 million in overtime pay to help prosecutors shrink the backlog through a "triage" program. Just one-third of those funds have been used so far.

The program depends on prosecutor's willingness to work overtime hours. Caseloads in the hundreds, if not thousands, already require long hours, getting more is sometimes a hard ask.

"I was here until 8 o'clock last night and then here again at 8 o'clock this morning," Harris County prosecutor Rashonda Shaw told us in the midst of her triage overtime shift. "I (will be) here at 9 o'clock tonight."

Before the pandemic, Beedle said they would average between 100 and 150 new misdemeanor cases a day. Now, there's about 170 new cases daily.

Beedle said misdemeanor prosecutors are assigned about 1,000 active cases, but even if they spend just five minutes reviewing each one that's still 5,000 minutes, or more than 80 hours. There's just no enough hours in the day to get to them all.

"With the resources that we have, there's only so much we can do," Beedle said. "I know we're doing our job and I think it's a case by case basis, frankly, (for) who's not doing their job."

So far, the misdemeanor prosecutors have reviewed nearly 10,000 misdemeanor cases as part of the triage program - 80% of those cases are more than a year old, 16% are between 180 and 365 days old and about 4% are less than 180 days old, according to data from the DA's office.

A triage program in the felony department shows prosecutors reviewed nearly 25,700 cases, where 57% were more than a year old.

Whether it's judges who aren't calling enough juries or defense attorneys who won't accept what Beedle calls "good" deals, prosecutors are just one part of the system and can't reduce the backlog alone, no matter how many 12 or 13-hour shifts they work a week.

"The defendant is a large part of the process. The defense attorney is also part of the process," Beedle said. "I can make all the offers all day long that are appropriate to resolve the case for the benefit of everybody, the victim, the defendant, the community, etc., but I cannot make a defendant complete the offer or accept the offer or anything of that nature. That is their right not to do so, so I cannot force that situation."

In the case of the DWI with the uncooperative witnesses, Gonzalez and Beedle decide to offer to reduce the charges and give the suspect time served, but they expect the defense attorney to reject it.

Older cases can be harder to try and that's a tactic some defense attorneys may use, Beedle said.

"They have a victim that has been to court several times. The case gets reset. They become frustrated with the process, don't want to be involved," Beedle said. "There are many cases that I cannot make without a victim being present. There are cases that go away in that regard. That's challenging. Evidence just in general, the older that it gets is more difficult to present from the prosecutorial side. There are lots of reasons why it becomes more challenging."

When 13 Investigates got an exclusive look at the misdemeanor triage program last month, Beedle often stopped to offer mini-lessons that will help guide the prosecutors to resolving future cases faster.

Nearly all of the 50 prosecutors in the misdemeanor division joined after the pandemic began. It's often seen as a training program where prosecutors get hands-on experience with misdemeanor cases in Harris County before getting promoted to felony crimes, where there is a similar triage program using overtime dollars to clear lower-level felonies. 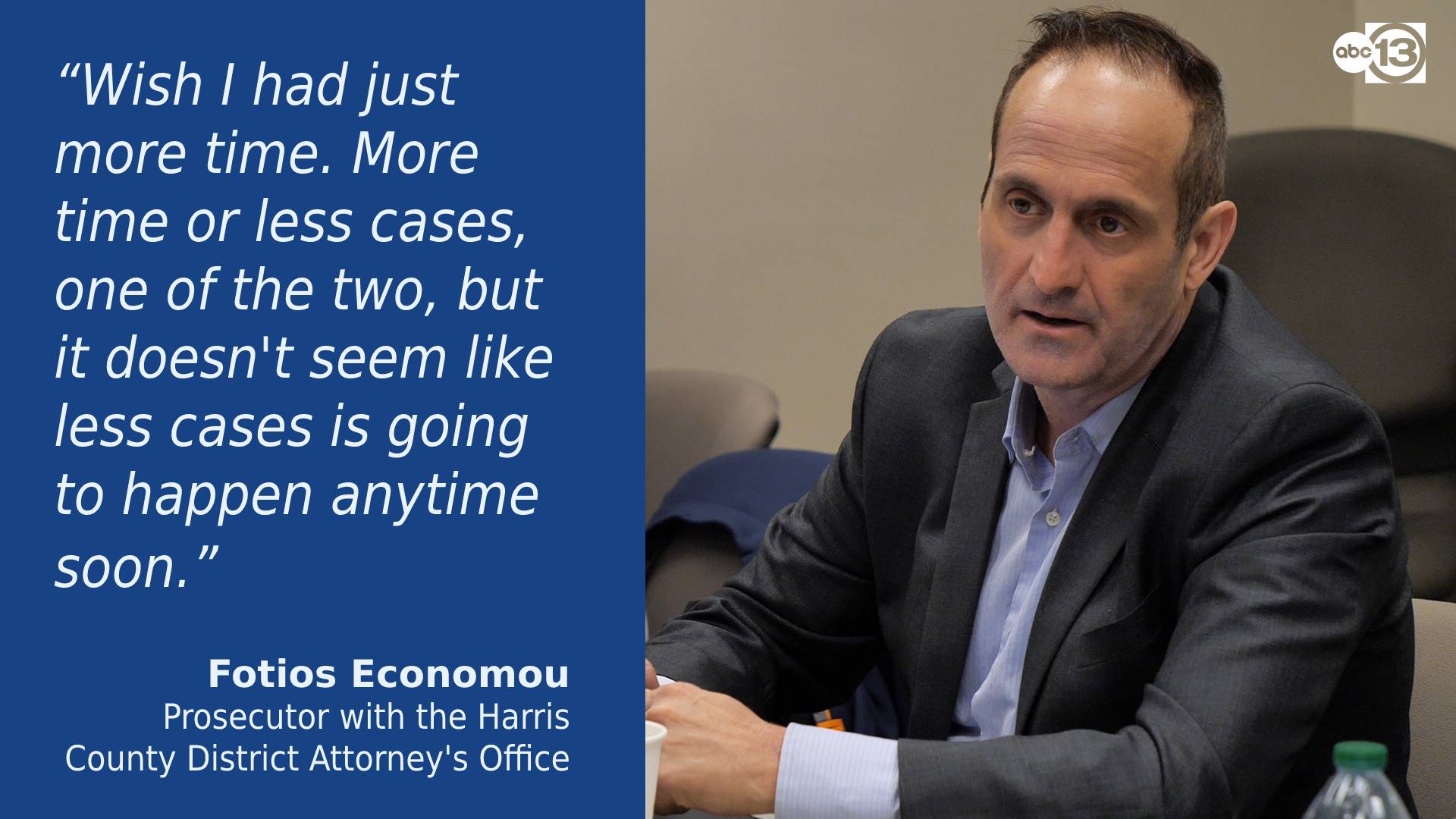 Harris County Assistant District Attorney Macey Anderson talking about a DWI case she's working - one of 2,378 she's assigned to - while Beedle explained why the case should be dismissed.

The suspect was involved in a one-vehicle accident and was charged with DWI due to his high blood-alcohol content. Even though the car is registered to him, nobody saw him behind the wheel.

"You can't make your case, so you got to get rid of it," Beedle said.

When we asked Anderson, who joined the division eight months ago, about dismissing the case, she said "I don't love it, especially with his high BAC (blood alcohol content)."

But, Beedle said it was the right call because the only witness in the case said the suspect wasn't actually the person behind the wheel - it was a different driver who fled the scene because he had an active warrant.
"This is my role in a general sense," Beedle said. "When I was a less experienced person, I was really fired up too ... but enthusiasm doesn't necessarily mean smart totality of decisions are made, particularly in your court (where) the judge is going to punt that."

Within the first hour of that 5 to 9 p.m. overtime shift, prosecutors dismissed about five cases. And although Beedle sees that as a win, it barely makes a dent on the backlog.

Harris County prosecutor Rebekah Wrobleske, who has 5,112 cases in her court, said her clearance rate is 112%, meaning she's clearing more cases that are coming in. 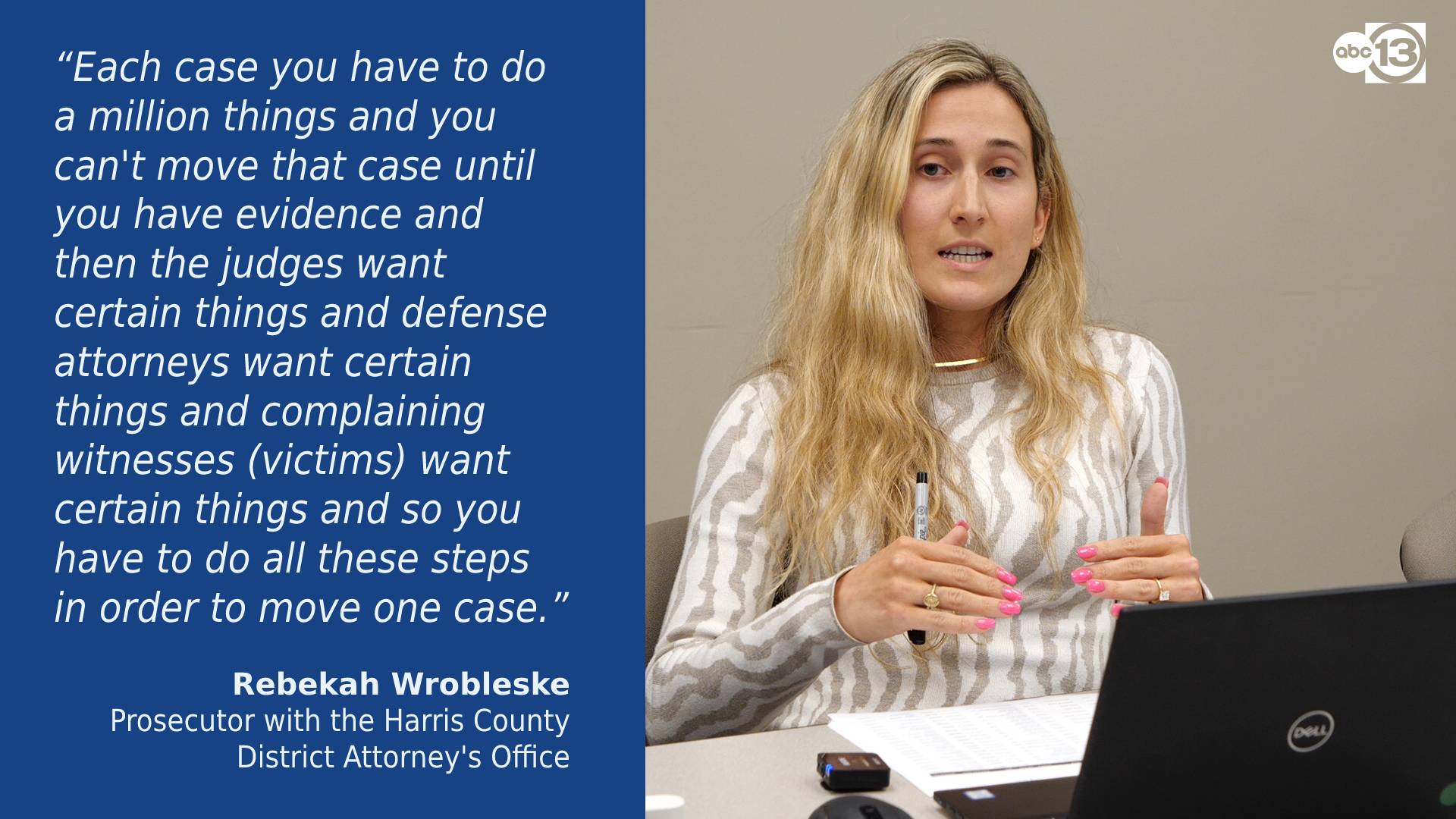 Beedle said when it comes to flagging cases that should be dismissed to lower the backlog, they focus on crimes that are victim-centric, meaning some non-violent offenders are getting a "good" deal.

For example, a teen caught trespassing and toilet papering someone's home might have their case dismissed and in return be required to do community service.

"We're trying not to permanently mark people, but hold them accountable for their actions, so give them an opportunity to what I call, 'earn a dismissal' and then move forward with their lives," he said. "That's what I want to talk about being a good deal. I think that's a good resolution in that type of case."

When we asked Assistant District Attorney Haniyah Naeem how many cases she's managing, she "it's a lot to count."

"You're working triage mode every single day, because you want to give the cases enough time," Naeem said.

Victor Flores, chief prosecutor for Criminal Court at Law No. 10, has 4,300 cases and said whenever the courts are backlogged, nobody wins.

"Especially the county, especially taxpayers who are wanting us to do what we've been sworn to do and that is seek justice. I think each of them goes away thinking that the system's just not working and it's working definitely too slow," Flores said.

Patty Fernandez, chief prosecutor for Criminal Court at Law No. 5, said she tries to prioritize victim-centered cases, like assault, family violence or DWIs, and dismiss or come to plea agreements on less serious cases, but there's not time to get to all of them when there's 5,287 cases total in her court.

"We're trying our best," she said.